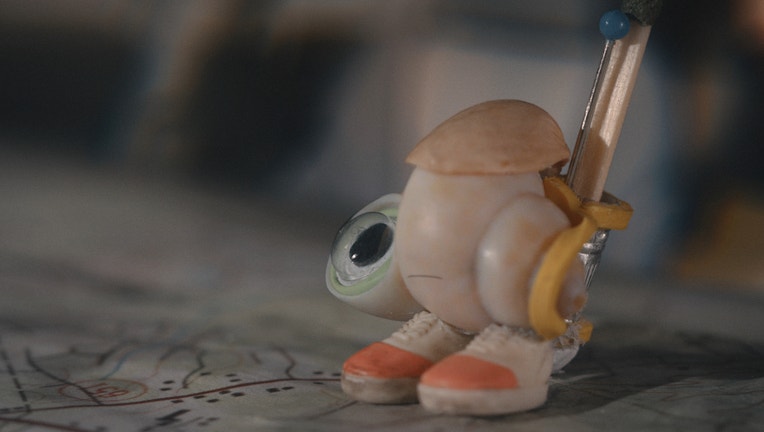 Chicago - Tone is one of the hardest things to nail in a film and one of the trickiest things to describe in a review, but it’s where "Marcel the Shell with Shoes On" shines brightest. This kid-friendly A24 movie is somehow whimsical, bittersweet, life-affirming and a little bit heartbreaking all at once. And that makes it the perfect movie for the moment, when the world is looking for art that not just uplifts its audience with joy but also understands the pain of loss too.

It’s a delightful surprise to find all that emotional complexity rolled up in such an unassuming little package via the story of a one-inch tall talking shell with big shoes and bigger dreams. But if there’s one thing this lovingly crafted mockumentary drills home, it’s that it’s best not to underestimate Marcel. Perhaps that’s why the film that bears his name is one of the best of the year — a modern comedy that feels equally like a timeless fairy tale.

About "Marcel the Shell with Shoes On": A long-awaited feature

As fans of internet quirk may recall, stop-motion conch Marcel (voiced by Jenny Slate) first made his debut in a 2010 YouTube short that quickly became a bit of a viral sensation. Two more YouTube shorts (and two children’s books) followed, all centered on the premise of an optimistic, self-assured little seashell showing a documentarian named Dean (director Dean Fleischer Camp) around his home. And now the "Marcel the Shell" movie expands outward to provide an origin story for Marcel’s viral fame and some more context for his unlikely friendship with Dean.

It’s a set-up that gives the movie an excuse to repeat some of Marcel’s most quotable lines ("Guess why I smile a lot? Uh, cause it’s worth it"), but what’s most fascinating here is the subtle yet decisive shift in tone. While the "Marcel" shorts were sweetly absurdist creations, the "Marcel" movie is more of a gentle tragicomedy. As Marcel’s grandma Nanna Connie (a spellbinding Isabella Rossellini) explains, Marcel’s exuberant exterior is a bit of a performance — a chance to seize his time in the spotlight and hide some of the deep pain they both feel.

You see, Marcel and Nanna Connie were once part of a thriving community of seashells and other tiny googly-eyed objects who inhabited the suburban home of a human couple (Rosa Salazar and Thomas Mann). But when the lovers split up, the rest of the community were lost in a freak accident. Now Marcel and Nanna Connie are doing the best they can to survive and thrive on their own, even as their home has been turned into an Airbnb filled with a series of rotating human guests. So far Dean is the first visitor to take any notice of Marcel and his aging grandma — perhaps because the filmmaker is nursing his own broken heart following the dissolution of his long-term relationship.

WATCH FREE ON TUBI: The adventures of "ParaNorman" 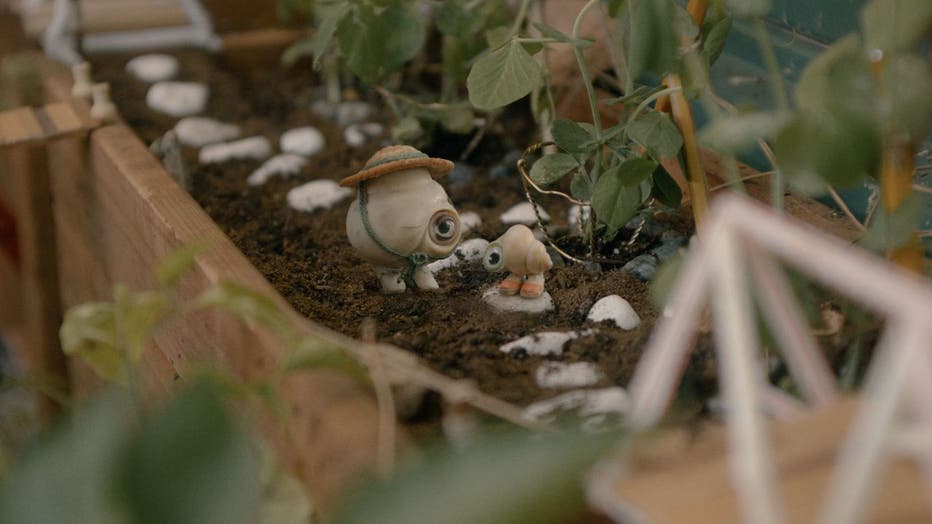 So, yes, "Marcel the Shell with Shoes On" is definitely a movie made by a divorced couple during the middle of a global pandemic (it’s the first of the "Marcel" series to be released since Slate and Camp announced their separation in 2016). And that meta subtext fuels the melancholy yet deeply hopeful feeling of the film. "But what if everything changes again?" Marcel anxiously asks his grandma while weighing whether it’s worth risking what he has for a chance at something more. With the wisdom of age, Nanna Connie needs just two words to reassure Marcel that the inevitability of change is something to be embraced, not feared: "It will!"

See "Marcel the Shell with Shoes On" for: One of the best movies of the year

In that sense, "Marcel" has a lot in common with the whimsical yet emotional films of Pixar or the beloved British "Paddington" series. But there’s even more simplicity at play in this small-scale, sun-dappled story, which blends live action and stop-motion animation so seamlessly that you forget you’re not actually watching living creatures. The movie delights in the inventive, Rube Goldbergian details of Marcel and Nanna Connie’s pocket-sized lives (Marcel sleeps between two pieces of white bread), not to mention their curiously eclectic knowledge of pop culture (they’re massive fans of "60 Minutes," for instance). And rather than build to one big lesson, it lets a lot of little observational moments accumulate into something that feels greater than the sum of its parts, like a real documentary might.

In other words, "Marcel the Shell" relishes in the details of everyday life, while acknowledging how complex everyday life can be. Marcel wrestles with topics like the weight of grief, the power of hope, the importance of community and the thorny side of fame, all without losing his signature pluck. And though Dean initially tries to maintain the distance of a documentarian, even he can’t help but be charmed by Marcel’s guilelessness. The sound of Dean warmly laughing at his little friend’s jokes becomes its own sort of soundtrack to complement the playful score by Disasterpeace.

WATCH FREE ON TUBI: The fantastical world of "Coraline" 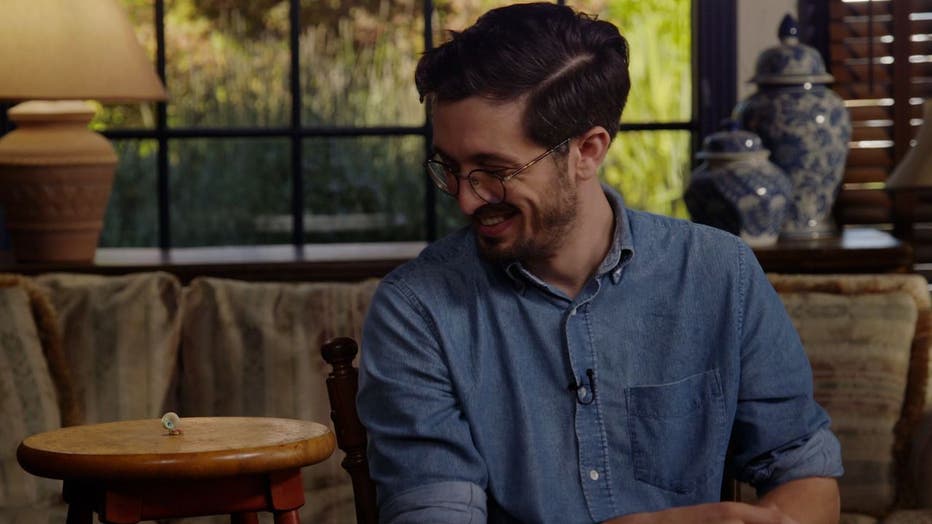 It’s that sense of surprise and spontaneity that proves to be the most endearing thing about this all-around enchanting film — all the more impressive because of how painstaking the actual stop-motion animation process actually is. Like many whimsical stories of little creatures facing big worlds, "Marcel the Shell" is a metaphor for the joyful, scary, exhilarating process of growing up. But it reaches rare notes of honesty about the complexities of that experience, in a way that will delight kids but speak most deeply to the grown-ups in the audience.

Make it a double feature with "The Boxtrolls," streaming free on Tubi

The Boxtrolls (2014): At one point in "The Boxtrolls," a film from the stop-motion animation studio Laika, 10-year-old Winnie (voiced by Elle Fanning) asks her new acquittance Eggs (Isaac Hempstead Wright) about his friends, the Boxtrolls. Legend has it that these sewer-dwelling trolls are quite fearsome. In reality, they wear cardboard boxes as clothes, steal bits of scrap metal in the night and are actually quite friendly, even merry. But Winnie doesn’t know that yet, and her hopes are high. "Did they eat your family, and did they let you watch?" she asks eagerly. Eggs expresses confusion, and she hastily corrects herself: "I mean, make you watch." She attempts to return her mask of ladylike propriety, but it's clear where her obsessions lie. Winnie’s fascination with the macabre — she’s heard about rivers of blood, and piles of bones from all the babies the Boxtrolls are said to eat — becomes both a funny running gag and a canny bit of characterization in this refreshing, underrated film. Read the rest of film critic Jesse Hassenger's retrospective. Rated PG. 96 minutes. Dir: Graham Annable and Anthony Stacchi. Also featuring Ben Kingsley, Jared Harris, Nick Frost, Richard Ayoade, Steve Blum, Dee Bradley Baker, Max Mitchell, Tracy Morgan, Nika Futterman, Toni Collette, Simon Pegg.

"The Boxtrolls" is streaming for free on Tubi — get the app

How to watch "Marcel the Shell with Shoes On"

"Marcel the Shell with Shoes On" expands into theaters nationwide on July 15. It is not currently available to stream.