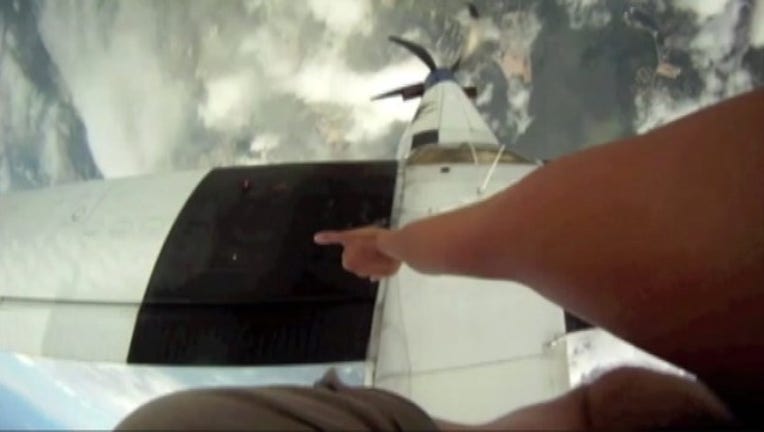 Two skydivers are lucky to be alive after a terrifyingly close call with a plane in mid-air.

A video with more than 2 million hits on YouTube – taken by the skydive instructor – shows the plane missing the tandem by merely feet.

The pair had just jumped from the plane, and experts say it was likely the pilot trying a maneuver to put on a show.

"You don't really see that maneuver very often any more in the U.S.," said T.K. Hayes, president and general manager of Skydive City in Zephyrhills. "We even used to do a bit of that here 15 or 20 years ago. Since skydiving started using turbine aircraft instead of piston aircraft, it really is easier to do this kind of thing."

But he says it's extremely dangerous and puts a lot of stress on the aircraft. Airplane-to-airplane collisions happen frequently in the United States, but this kind of collision is rare. Nearly a decade ago, a skydiver was killed in Deland after colliding with a plane.

"There are airplane-to-airplane collisions in the United States every week to 10 days -- people don't realize that stuff," Hayes said. "Now, of course, collisions between planes and skydivers -- it happens, but it's much rarer. Aviation is a dangerous sport."

This plane comes just feet from delivering a likely fatal blow. Skydiving instructor Forest Pullman, who uploaded the video, was participating in the jump, which happened in Thailand in October.

In one part of the video, it looks as if the plane is so close that it even snags a portion of their parachute. Thankfully, the tandem made a successful and safe landing.

"It makes for a great camera shot, but this one – it just unfortunately demonstrates clearly just how dangerous that is and how things can go wrong in a hurry when everything is moving at 120 or 140 mph," Hayes said. "Things can go wrong pretty quick."