Researchers at Florida International University say they've discovered as many as 16 drugs in a single fish. On average, they found seven pharmaceuticals per fish they analyzed in South Florida.

FLORIDA KEYS - During a three-year study down in South Florida, dozens of bonefish were found with traces of pharmaceuticals in their blood and tissue.

Researchers at Florida International University and the Bonefish & Tarpon Trust – a non-profit organization – conducted the study, focusing on a 200-mile stretch of the state’s coastline to include Biscayne Bay and the Florida Keys. Over the years, they found as many as 17 pharmaceuticals in a single fish. That includes medicine such as blood pressure medication, antidepressants, and pain relievers.

A total of 93 bonefish were sampled and researchers found an average of seven pharmaceuticals per bonefish. Traces of drugs were also found in their prey, such as crabs, shrimp, and other types of fish.

Based on the results, it suggests that "many of Florida’s valuable fisheries are exposed, and not only the bonefish fishery," according to a news release by the BTT. 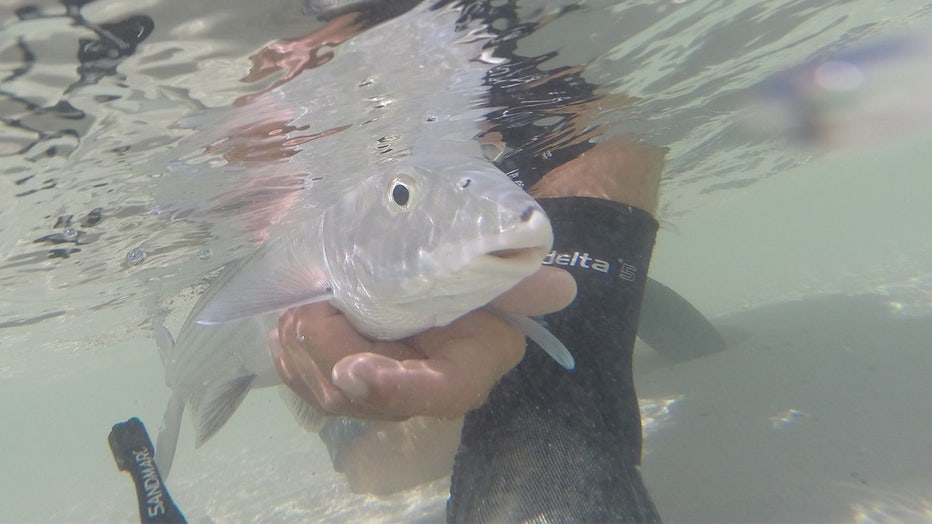 "These findings are truly alarming," said Dr. Jennifer Rehage, the lead researcher. "Pharmaceuticals are an invisible threat, unlike algal blooms or turbid waters. Yet these results tell us that they are a formidable threat to our fisheries, and highlight the pressing need to address our longstanding wastewater infrastructure issues."

According to the Florida Department of Environmental Protection, about one-third of Florida’s population uses septic tanks to treat their wastewater. That leaves two-thirds who use sewer lines.

Billions of prescriptions are filled annually in the U.S. The contaminants are mostly from human wastewater and "are not sufficiently removed by conventional water treatment," according to BTT.

"They remain active at low doses, can be released constantly, and exposure can affect all aspects of fish behavior, with negative consequences for their reproduction and survival," the non-profit said in a statement. "Pharmaceutical contaminants have been shown to affect all aspects of the life of fish, including their feeding, activity, sociability, and migratory behavior."

The study’s findings were presented during a panel event in Tallahassee last month. The BTT president said the results showed the state needs to modernize Florida’s wastewater treatment plants.

"Governor DeSantis’s leadership and historic funding for water quality improvements, along with legislative support and funding, have set us on the right path," Jim McDuffie said. "Now we must expedite those efforts, increase investment over the long term, and pursue innovative solutions. We must accelerate septic to sewer conversion, and in those places where sewage is not available, require the use of advanced septic technology. The health of our citizens and the coastal resources that support Florida’s economy depend on it."

Bonefish are inshore fish and are rarely more than 10 pounds. They travel in small schools. According to the Florida Fish and Wildlife Conservation Commission, bonefish are catch-and-release only as of 2013.