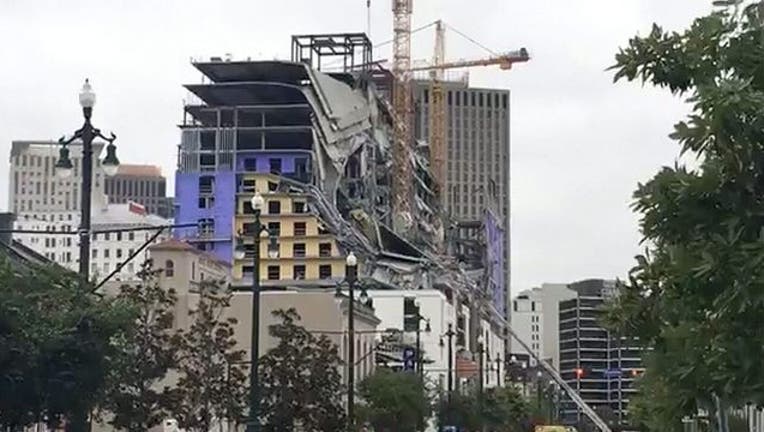 NEW ORLEANS, La. - A Hard Rock Hotel and Casino building under construction in downtown New Orleans partially collapsed on Saturday, killing at least one person and injuring more than a dozen others.

Gov. John Bel Edwards confirmed the fatality to reporters near the scene. Three people were originally unaccounted for, officials said, but by mid-afternoon, one of those individuals was said to have transported themselves to the hospital and was in stable condition.

Of the two other individuals still missing, New Orleans Fire Department Chief Timothy McConnell said  "We believe we know where they are but we are unable to locate them at this time," adding that search teams used drones to pan the building but were unable to find the individuals.

The chief confirmed that an urban search-and-rescue team was preparing to sweep the building for the two missing people despite fears of an additional crane collapse.

"One they think they can get them safely," McConnell said adding that the other "we're not sure" because the area that the person is believed to be trapped is "a very unstable part of the building."

"We assume they are alive," McConnell said.

"This remains a very fluid and dangerous situation and every few minutes something is falling," Edwards said, warning people to stay away from the area.

McConnell said they received a call about the fallen building around 9:14 a.m. Saturday. He said the top six floors of the building collapsed and that the rest of the construction was "very unstable."

He confirmed the death and that two people were missing. He reported 18 people were taken to the hospital by EMT officials.

EMS Director Dr. Emily Nichols also added that the number of individuals who transported themselves to the hospital was "somewhere in the double digits." She also said that all who had been hospitalized are in stable condition and several patients have been discharged.

"It's still a very dangerous situation," he said. "The crane is still in place but it is unsupported and very dangerous. We are in the process of evacuating the buildings in the perimeter."

McConnell said that the crane is approximately 270 feet tall and more, possibly larger equipment will be needed to stabilize it.

Mandatory evacuations have been ordered for the uptown side of Bienville Street, the downtown side of Canal Street and lakeside of Burgundy Street as well as additional road and traffic closures spanning further out of the area, officials announced.

The building collapse was caught in a dramatic video.

The cause of the collapse wasn't immediately known.

"The frame of the building is considered stable but is unsupported, and therefore the situation is considered dangerous and residents are strongly encouraged to avoid the area until further notice," LaTonya Norton, a spokeswoman for New Orleans Mayor LaToya Cantrell. said.

The fire department ordered the evacuation of nearby buildings.

"It sounded like a -- I don't know how to describe it -- like a building coming down," said Matt Worges, according to Nola.com. He witnessed the collapse from a Tulane School of Public Health classroom in a nearby building.

The building was under construction at the corner of Rampart Street and Canal Street, a broad boulevard just outside the the city's famous French Quarter, lined with restaurants, hotels and retailers. Canal, which carries six lanes of traffic divided by a wide median where streetcars roll, separates the Quarter from the city's main business district.

The development calls for 350 hotel rooms and condominiums. Plans were unveiled last year. The hotel was scheduled to open in the spring.