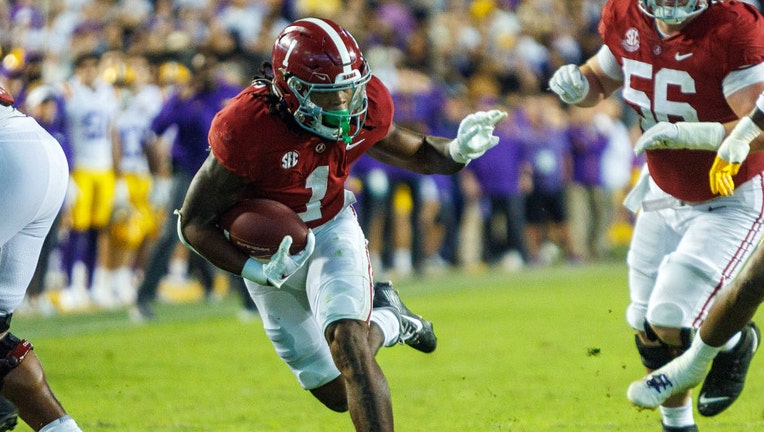 Alabama Crimson Tide running back Jahmyr Gibbs (1) catches a pass during a game between the Alabama Crimson Tide and the LSU Tigers on November 05, 2022, at Tiger Stadium in Baton Rouge, Louisiana. (Photo by John Korduner/Icon Sportswire via Getty Im

With head injuries prevalent in football, the NFL is expanding a program using a device that will collect data when head impacts occur in players.

The mouthguard sensors will provide data on head impacts in players to help the league understand and reduce concussions in football,  according to a release from the NFL.

On Thursday, the NFL announced its mouthguard sensors program has expanded to eight universities. More than 250 college football players at these schools are participating in the program to help the league in their research efforts.

The NFL explains adding more schools to their program not only helps gather more data on head impacts, but also with developing methods to reduce injuries and upgrade safety equipment, including helmets.

NFL sponsor Align Technology, the maker of Invisalign clear aligners, performed dental scans on the college football players' teeth to help with the development of the mouthguard sensors.

RELATED: NFL to make 'a change or two' to concussion protocol: Goodell

"We are excited about the opportunity to partner with the NFL to assist them in collecting more data to better understand on-field head impacts," Dr. James Clugston, Team Physician at University of Florida, said in a statement from the NFL release. "The research will continue to help make the game of football safer and will guide us to develop best practices for equipment design, rules of competition and practice drills."

The mouthguard sensor program began in 2019 as part of the NFL's $60 million commitment to promote health and safety initiatives, the release added.