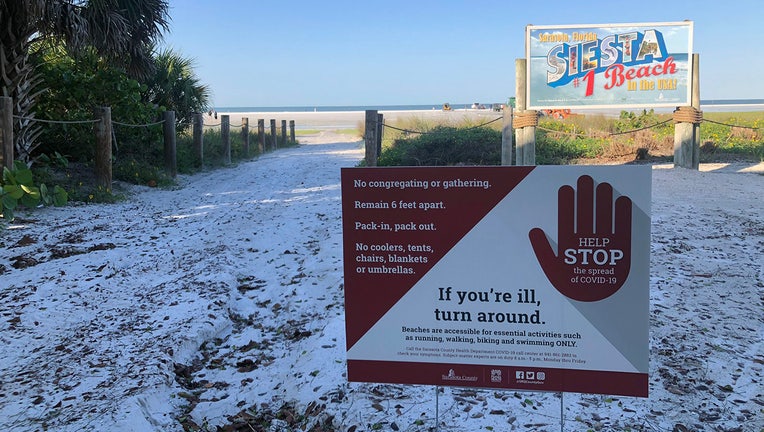 SIESTA KEY, Fla. - After shutting down for more than a month, Sarasota’s beaches are officially back open, sort of.

County beaches in Sarasota are available for physical activity and some types of recreation: swimming, walking, running, surfing and fishing are now allowed. Laying out, bringing a cooler or chair, however, is still off-limits.

"We are not issuing citations, we are not going to charge anybody," said Sarasota County Sheriff Tom Knight.

Sheriff Tom Knight went out to see how people were behaving.

So far it appeared good.

"It's a nice time for government, who has been heavily involved in a lot of decisions and what’s going to happen in people’s lives and the mandates, is to say 'thank you for doing what’s right,," said Sheriff Knight.

Sarasota beaches reopen for limited use

Beach pavilions, playgrounds, tennis and basketball courts will all remain closed as well. Congregating for any reason, even for group fitness, won’t be allowed either.

The view from SkyFOX Monday showed people using the beach but mostly abiding by the regulations.

While access barriers have been removed for foot trails, they’ll still remain in place for public parking lots. Commissioners say they plan to phase in parking lots in the next two weeks.

"I think everybody has a lot of stress on them right now, they need some opportunities to get rid of some anxiety and some depression," said Sheriff Knight.

RELATED: To open or not to open? The great beach debate continues in Pinellas County

Commissioners say they don’t want anyone to let their guards down about the virus but the intent is to let people use the beaches for exercise just like any of the county’s other parks.

"Just because we are opening up the beaches doesn't mean we aren’t taking this virus seriously. This is a very dangerous situation but we also have to be smart how we react to it. I think we’ve done a great job in Sarasota County," said Sarasota Commissioner Christian Ziegler after commissioners voted unanimously last week to partially reopen the county’s beaches.

Sarasota has seen fewer cases of coronavirus than neighboring counties to the north, but cases in Sarasota tend to have more serious outcomes than in other parts of the state. Of the county’s 321 confirmed cases, 32 have resulted in death, a rate of 10 percent. Statewide, the death rate among confirmed cases is 4%, according to Department of Health data.

Sarasota has seen fewer cases of coronavirus than neighboring counties to the north, but cases in Sarasota tend to have more serious outcomes than in other parts of the state. Of the county’s 321 confirmed cases, 32 have resulted in death, a rate of 10 percent. Statewide, the death rate among confirmed cases is 4 percent, according to Department of Health data.

The partial re-opening applies to all public Sarasota County beaches but Lido Beach, which is under the city of Sarasota’s purview, is still closed.

A hopeful sign, restaurants that were fully closed in Siesta Key Village have now reopened for take-out, as life takes on a new look near our coastal areas.

"It is is absolutely like magic, we like reborn, thank you for open up the beaches," said visitor Flo Alexander.