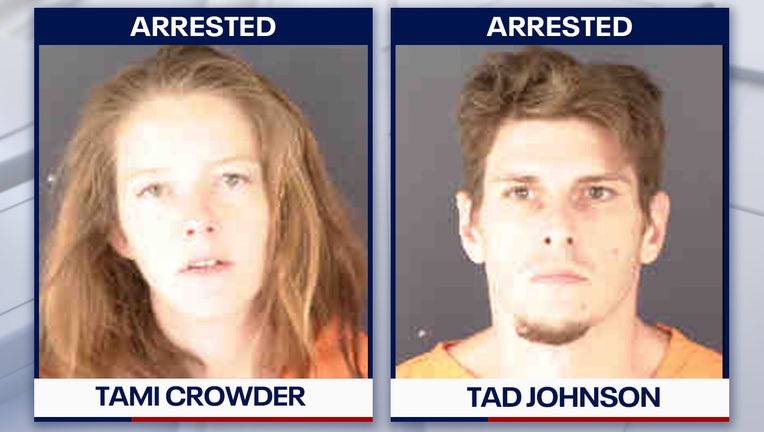 NORTH PORT, Fla. - A North Port woman was robbed at gunpoint by two masked suspects, but she recognized both of them, police said. One of them she identified as a friend of hers.

North Port police said they responded to the robbery on Monday along Gallatin Lane. Police said the victim told them one of the masked suspects was 30-year-old Tami Crowder, a friend who was visiting her. The victim also recognized the second suspect as 34-year-old Tad Johnson, who is in a relationship with Crowder.

"It was later determined Crowder set up the victim to walk out to a vehicle to look at something inside the car, and as they walked back in, Johnson approached her," police said in a news release.

Detectives said Johnson pointed a handgun at her, threatened her, and pinned her down. They said he ran away with the victim’s purse.

Police said Crowder chased the victim back into the home and the victim was able to lock the door. Investigators said both fled, but officers had Crowder’s license plate number.

Her vehicle was located at North Port home and when officers arrived, they sad they spotted the vehicle in the driveway with multiple people inside. Crowder and Johnson were arrested.

Police said they found items belonging to the victim.