Residents in the Village of the Arts community believe someone drove through the neighborhood, peppering yards, businesses and sidewalks with the flyers.

BRADENTON, Fla. - Neighbors in a Bradenton community have been finding letters scattered throughout the area that appear to be written by a white supremacist group.

Residents in the Village of the Arts community believe someone drove through the neighborhood, peppering yards, businesses, and sidewalks with the flyers.

"It's disturbing, still, especially nowadays. You would think [white supremacy] would be gone by now, but it isn't," said Mark Burrow, who found five letters in his yard and told FOX 13 some of his neighbors were worried. "They didn't really know that there's a racist group roaming around their neighborhood at night. That kind of makes them a little uneasy."

The person who penned the letter began by writing, "HOW DARE ANYONE TRY TO SHAME ME FOR MY WHITE PRIVILEGE!"

What followed is a series of inflammatory statements about white people working hard and "suffering," while accusing other races of not doing the same. 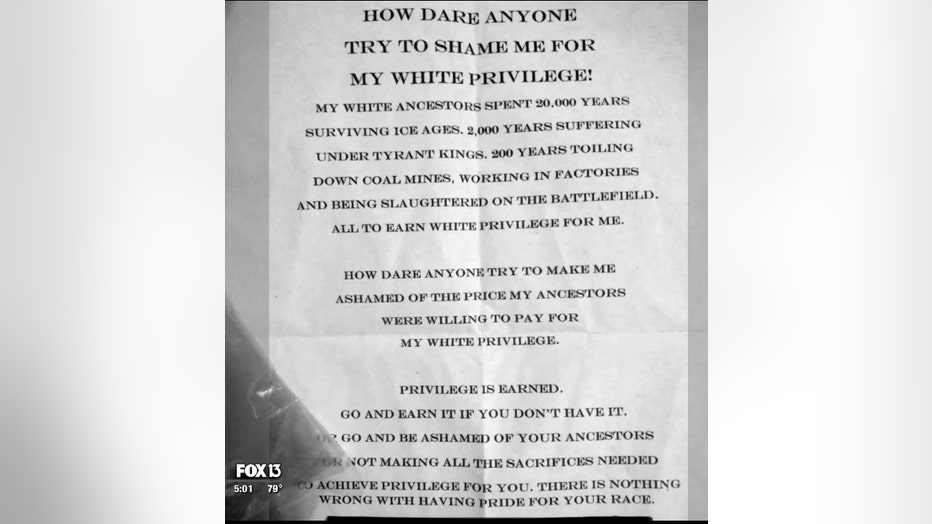 The note ends with a link to a website belonging to a group the Southern Poverty Law Center classifies as neo-Nazi.

The situation was especially concerning for neighbors like Vanessa Byrnes, whose 26-year-old son is mixed race.

"For somebody to hate him because he's a caramel complexion or a dark complexion? It really is a sad thing," Byrnes said. "I think these people are just ignorant and they don't really know what they're talking about."

Bradenton police are investigating the incidents. A legal expert told FOX 13, if someone is caught, they will likely face charges of littering.