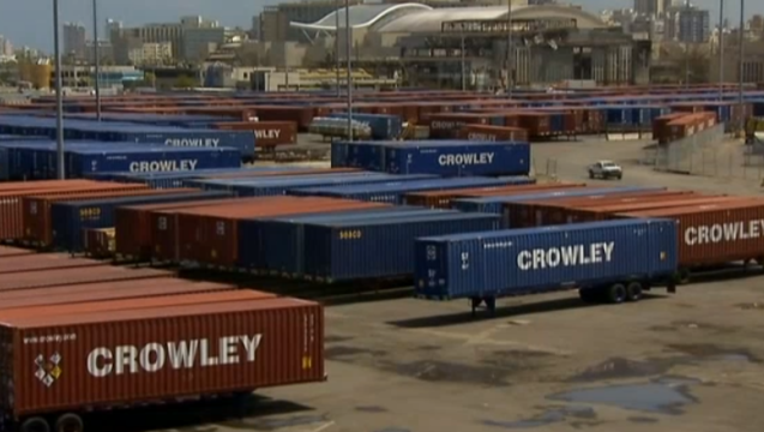 The aftermath of the powerful storm has resulted in a near-total shutdown of the U.S. territory's economy that could last for weeks and has many people running seriously low on cash and worrying that it will become even harder to survive on this storm-ravaged island.

There are long lines at the banks that are open with reduced hours or the scattered ATMs that are operational amid an islandwide power outage and near total loss of telecommunications. Many people are unable to work or run their businesses because diesel to run generators is in short supply or they can't spend all day waiting for gas to fill their car.

Engineer Octavio Cortes predicts it will only get worse because so many of the problems are inter-connected and cannot be easily resolved.

"I don't know how much worse it's going to get," Cortes said as he joined other motorists stopping on a bridge over a river in northern Puerto Rico to catch a faint cellphone signal. "Right now it's manageable, but I don't know about next week or after that."

The father of six typically works from home or travels around the world for his job, but neither approach is possible now because the power is still out for nearly all 3.4 million people in Puerto Rico and flights off the island are down to only a few each day.

While Cortes is OK for the moment, others don't have nearly the same resources.

Cruzita Mojica is an employee of the Puerto Rico Treasury Department in San Juan. While she, like many public sector workers, has been called back to work she can't go because she has to care for her elderly mother in the aftermath of the storm. She got up at 3:30 a.m. Wednesday and went to four ATM machines only to find each one empty.

"Of course I took out money before the hurricane, but it's gone already," she said. "We're without gasoline. Without money. Without food. This is a disaster."

Surgical technician Dilma Gonzalez said she had only $40 left and her job hasn't called people back to work yet in the capital. "Until they let us know otherwise, I'm not supposed to go back," she said with a shrug as she pressure washed the street in front of her house, sending muddy debris flying.

All are struggling with the overwhelming devastation of Hurricane Maria, which began tearing across the island early in the morning of Sept. 20 as a Category 4 storm with winds of 155 mph. It destroyed the entire electricity grid while grinding up homes, businesses, roads and farms. At least 16 people were killed. There still is no exact tally of the cost and full extent of the damage, but Gov. Ricardo Rossello says it will bring a complete halt to the economy for at least a month.

"This is the single biggest, major catastrophe in the history of Puerto Rico, bar none, and it is probably the biggest hurricane catastrophe in the United States," Rossello said Wednesday as he delivered aid to the southern town of Salinas, whose mayor says 100 percent of the agriculture there was wiped out when the wind tore up plantain, corn, vegetables and other crops.

On Thursday the Trump administration announced it was waiving the Jones Act, a little-known federal law that prohibits foreign-flagged ships from shuttling goods between U.S. ports, for Puerto Rico. Republicans and Democrats have pushed for the move, saying it could help get desperately needed supplies to the island more quickly and at less cost.

White House Press Secretary Sarah Huckabee Sanders said on Twitter that President Donald Trump had "authorized the Jones Act be waived for Puerto Rico" in response to a request from Rossello and that it "will go into effect immediately."

Another problem is that the relief supplies needed so badly are beginning to pile up in port.

Close to 10,000 containers filled with food, water and supplies are sitting there, but there are no truckers to deliver them. Only about 20 percent of the truckers needed to move them have returned to work, and many can't be contacted because cell service is down.

Barges are arriving every day with containers, but there are no truckers to deliver them.

Antonia Garcia, a retiree who lives in the city of Bayamon, said she was down to her last $4. She spent a day using precious gas to look for an ATM that was in operation because she couldn't get into her credit union, which was taking only 200 customers a day. "This has become chaotic," she said.

Puerto Rico was already struggling before the storm. The island has been in a recession for more than a decade, the poverty rate was 45 percent and unemployment was around 10 percent, higher than any U.S. state. Manufacturers of medical equipment and pharmaceuticals, which are the most important segment of the economy, have been shedding jobs for years. Now everything from multinational companies to small businesses and ranches are scrambling to get enough fuel to run generators while their employees struggle to even get to work.

Before the storm, the island's government was in the midst of bitter negotiations with creditors to restructure a portion of its $73 billion in debt, which the previous governor declared unpayable. Rossello appeared to warn the bondholders that the storm had made things worse. "Puerto Rico practically will have no income for the next month," he told reporters.

Making matters worse for many consumers is the fact that those food stores that are open, typically on reduced hours, are unable to process credit or bank cards or the local system of welfare payments. The businesses are insisting on cash, even though that is technically illegal.

Still, as in any economic crisis, there are people who find the upside. Christian Mendoza said the car wash where he works hasn't re-opened so he has been selling bottled water, even without refrigeration. "The water hot and it still went like you wouldn't believe," he said.

Another relative success story is Elpidio Fernandez, a 78-year-old who sells coconut and passion fruit ice cream from a pushcart on the streets of San Juan and has a supplier with a generator. He has made up to $500 on some days since the storm.

"Business has multiplied by a thousand," he said, but he quickly added: "Even though I'm doing well, I don't feel good because I know other people are suffering."