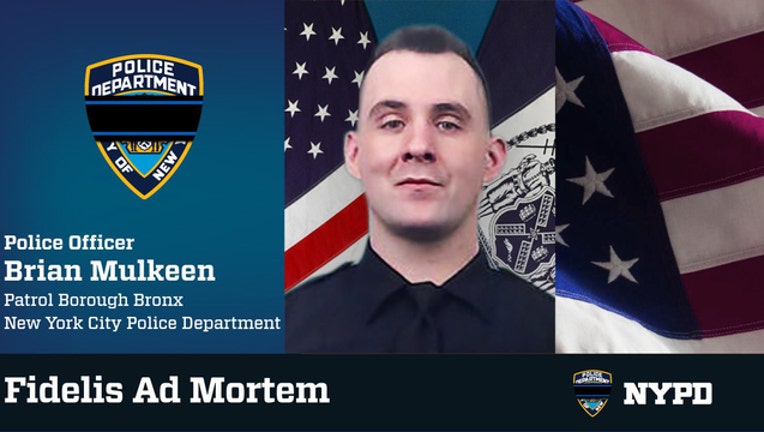 NEW YORK (AP) - A New York City police officer grappling with an armed man was killed early Sunday in the Bronx after being shot three times, possibly with his own gun.

The 27-year-old suspect was also killed, after five officers fired at him, police officials said. He was pronounced dead at the scene and has not been publicly identified yet.

The NYPD identified the slain officer as 33-year-old Brian Mulkeen.

"We lost a hero this evening," Mayor Bill de Blasio said at a news conference outside Jacobi Medical Center in the Bronx.

Mulkeen was patrolling the streets around a city apartment complex at around 12:30 a.m. as part of a unit investigating potential gang activity, Chief of Department Terence Monahan said.

Mulkeen and his partner tried to apprehend a man who had fled questioning, and a struggle on the ground ensued, Monahan said.

A .32-caliber revolver that police say belonged to the man was recovered. It had not been fired, Monahan said.

Monahan said the suspect was on probation until 2022 for a narcotics-related arrest last year and had several prior arrests, including a burglary conviction in Rockland County.

Mulkeen had served nearly seven years with the department and worked out of the 47th precinct. He lived with his girlfriend, an NYPD police officer in the Bronx's 44th precinct.

Monahan called the officer "brave," and said he was "doing the job we asked him to do, a job that New Yorkers needed him to do."

The track and field program at Fordham University in the Bronx posted that Mulkeen was an alumnus, and had recently become a volunteer coach. The program said that as a student, he was part of the 2008 team that won the Metropolitan Outdoor Track & Field Championship, a first for the program.

New York Gov. Andrew Cuomo, at an unrelated event, said Mulkeen "made the greatest sacrifice. He put his life on the line and he lost it in service to the people of this city."

The NYPD has had a difficult year, with a number of tragic deaths.

Mulkeen is the second NYPD officer killed in the line of duty, following Detective Brian Simonsen, who was accidentally shot by fellow officers in February while confronting a robbery suspect.

"We've been here too often. We know the directions to get here," Pat Lynch, the president of New York City's Police Benevolent Association, said at the press conference. "It has to stop."

Mulkeen's death comes as the NYPD has declared a mental health emergency amid a spate of suicides by police officers. Nine NYPD officers have taken their own lives this year, a disturbing trend that is also happening throughout the country.