A shelter cat in Texas was put in solitary confinement after repeatedly escaping and freeing other cats.

CINCINNATI - An Ohio animal shelter threw an adorable birthday party this week for a senior cat named Sammy turning 19, a day before the feline found his next loving home.

Staff at Cincinnati Animal CARE shared photos of the birthday bash on Tuesday, complete with streamers, birthday signs and Sammy dressed for the occasion in a sparkly blue hat.

"Recently, the staff at Kitty City learned that today is senior Sammy's 19th birthday! Naturally, we threw him a birthday party," the shelter wrote on its Facebook page. "Join us in wishing Sammy a happy birthday!"

Sammy’s previous owner went to live in an assisted living facility and he has been at the shelter since June 7. The staff described him as "just amazingly sweet," saying the cat would love "a nice, quiet home to live out his golden years." Sammy is extra special, as most indoor cats live on average 10 to 15 years, according to UC Davis Veterinary Medicine.

The only stipulation for whoever adopts the feline is that they’ll be required to keep the tradition going and throw him a 20th birthday on June 15, 2022, the shelter added on Facebook.

"He's very observant and likes to just sit and watch what's going on. When he's not people watching, he's usually taking a nice nap and would love to do that in your lap. He's a sweet, carefree guy," a representative said, noting that he has no notable health issues causing any immediate concern.

The organization added that after word spread of Sammy’s birthday bash, it received a number of applicants and he was officially adopted on Wednesday afternoon. 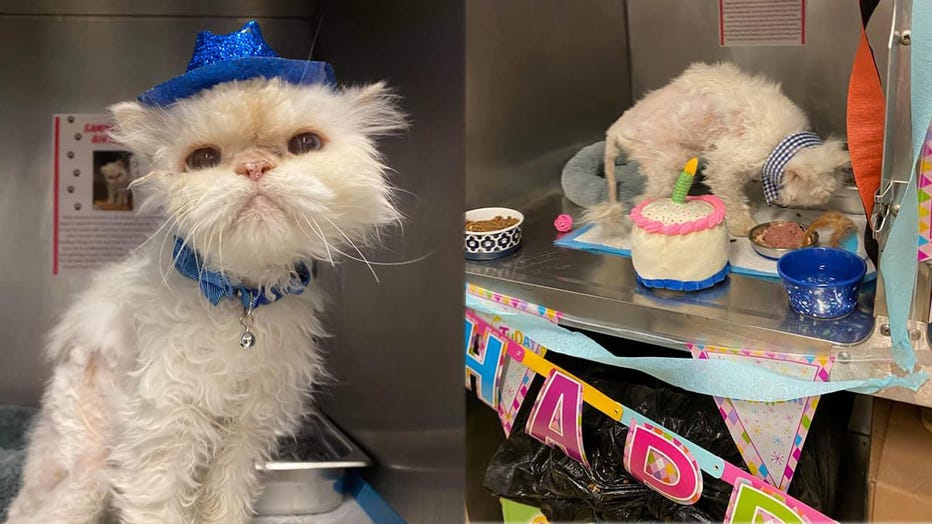 The organization, which is a no-kill animal shelter, said in another recent Facebook post that it is currently over capacity and desperately seeking homes for dogs, referring to the situation as a "code red."

"We have dogs in emergency kennels, dogs living in our offices, staff members are fostering animals, but they just keep coming in," the shelter wrote.

Cincinnati Animal CARE said it allows out-of-state adoptions, but interested applicants must physically come to the shelter. It does not do virtual adoptions or transfers.

Those interesting in adopting or fostering an animal can visit the shelter’s website here.

RELATED: ‘He will not be contained’: Quilty the shelter cat put in solitary confinement after repeatedly freeing other cats