Kevin ‘Mac’ McGovern is a retired Navy Captain and civilian engineer from Orlando. He is running for Congress in the Tampa Bay area based on the results of redistricting, as he explained to FOX 13 Political Editor Craig Patrick.

Craig Patrick: "Why are you running in this district? You were running in an Orlando area district just a couple of months ago, and that is where you're from. Why did you switch and decide to run here?"

Kevin 'Mac' McGovern: "Sure. Great question. I was actually in the seventh. I own a home downtown Orlando, and we were in the seventh (district). And I was going to run against Stephanie Murphy, I thought until she dropped out, and I got redistricted out so that where I live now is now the 10th. (district)"

Kevin 'Mac' McGovern: "Well, to be quite honest, it's uncompetitive for a Republican."

McGovern’s campaign lists inflation and taxes, military strength & law enforcement, border security, constitutional rights and election integrity as his priorities. In our interview he said there were a lot of questions about the 2020 election, but he does think there was widespread fraud. 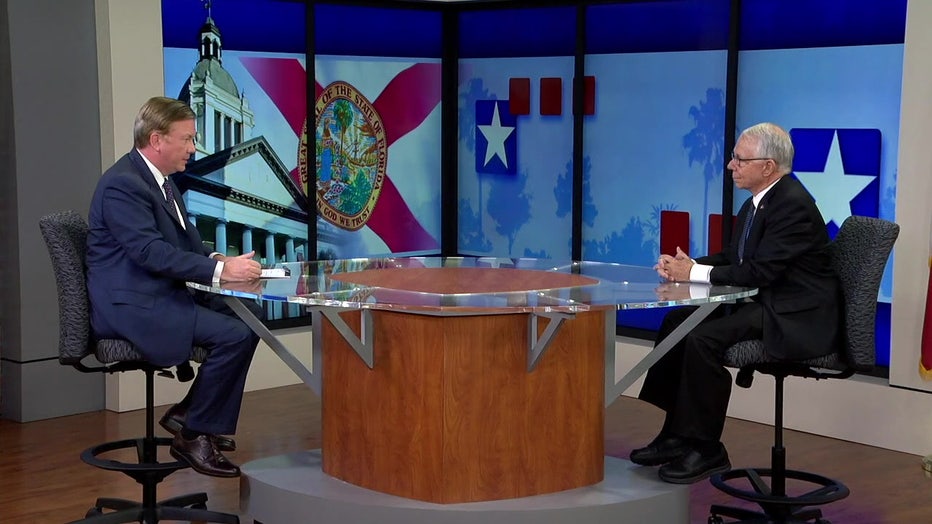 In the course of our interview, he stressed he would target waste and fraud in federal spending and use his experience as a Navy Captain to assess China’s aggressive moves on Taiwan.

China and the threat to Taiwan

Craig Patrick: "You state that you patrolled the China Sea, and that you know a thing or two about China and its threats toward Taiwan.

Craig Patrick: "If you're elected as a member of Congress and if China does, in fact, invade in the same way that Russia invaded another country, Ukraine, would you vote to authorize war to defend Taiwan.

Kevin 'Mac' McGovern: As a last step? I believe in as one who's been to war, the last thing you want to do is send our troops into war. But there's things you can do before that. There are economic options."

Craig Patrick: "But if the invasion occurs at that point, would you vote to authorize war to defend Taiwan?"

Kevin 'Mac' McGovern: "Possibly. We'd have to look at it. When you say war, are you saying al-out war, and they're there bombing Taipei and destroying it?"

Kevin 'Mac' McGovern: "I would have to say that we would have the Seventh Fleet in there. We would be ready for a war. And again, that is something the commander in chief and then the Congress of the United States would have to vote for. But I would have to look at that situation as it unfolds to say yes or no as a binary is a it would be a foolish answer. There are so many. When you've spent 40 years in the US Navy, there's so many components of what would happen at that point. Are they coming in with a small attack? Are they right? Saber rattling and they made a mistake. What happens then? I played chicken in the China Sea more times than I could count. So you have to. You have to look at that situation. And that's why we want good people at the top. The generals, the admirals, people who know that and say, we can do this and prevent war, or now we're backed into a corner. We don't want to get backed into a corner."

Craig Patrick: "You're running as a fiscal hawk. You say that wasteful spending is jeopardizing our national security. We'll close again for context. Sure. A specific example that really gets your goat of what you consider to be wasteful spending."

Kevin 'Mac' McGovern: "Well, look at the bills that we've pushed out recently. First of all, go all the way back to the beginning. A year ago March, we had a covered bill. Good, good thing the country needed help. We put there was so much fraud, waste and abuse in that bill. And having been in D.C. for so many years, I see it any big government."

Craig Patrick: "You said it was a good bill, but it contained things it shouldn't. Do you vote yes or no if you had a seat in Congress?"

Kevin 'Mac' McGovern: "That's a great question. And most congresspeople don't look at the lines in there. They don't look at the line items. They say this is going to be good next election. I don't want the people of my district. I don't want my opponent coming after me because I said no to this bill because it was wasteful spending. I was the first in my district to sign term limits and I believe in term limits, and it's wasteful. I'm you know, I start as a 17-year-old kid and ended up as a Navy captain. I am a loud mouth. I will stand up and say, look, we need to get this. When these things come out of committee, it might be too late. You need to make sure the right things are being put into that bill before and then if they're not, you need to fight like heck to say, no, we're sending this back. I'm not going to vote, and I'm going to tell you why I'm not going to vote."

Craig Patrick: "You've done this. You've put up a good fight, and yet it is what it is. The gentleman from Florida, take your seat. Now it's time for a vote, knowing what you know with the problems you have with it. But the important things that it contained to fight COVID at that time when you voted yes or no."

Kevin 'Mac' McGovern: "I would have voted yes on that bill and because I saw the suffering of the people of the United States. But here's what happens in DC. You put a bill out like that, and they ask for more than they need. And then there's no audit. There's no paper trail. We have lost so much money on this. Now, the American people, the people in 15 and every other district in this country are on the hook for that. And that is not right. So what we need is we need fresh ideas. We need people who are going to fight. When I was in DC, we used to say that D.C. is where good ideas come to die. We don't want that. We want the good ideas. We want to get rid of the pork."