Teen struck by lightning still on road to recovery

SARASOTA, Fla. - Millions of people travel from around the world to visit Florida's beaches, but not everyone is aware of the threat that arises when fast-moving storms roll in.

Floridians have heard the saying, "When thunder roars, go indoors." One Texas mom returned to Tampa Bay on Friday to educate beachgoers about those very dangers. July 16 marks one year since Jacob Brewer, then 14 years old, was struck by lightning on Siesta Key Beach.

The strike hit the teenager in the chest before exiting his right foot. Miraculously, Jacob survived, but he is now paralyzed from the waist down. 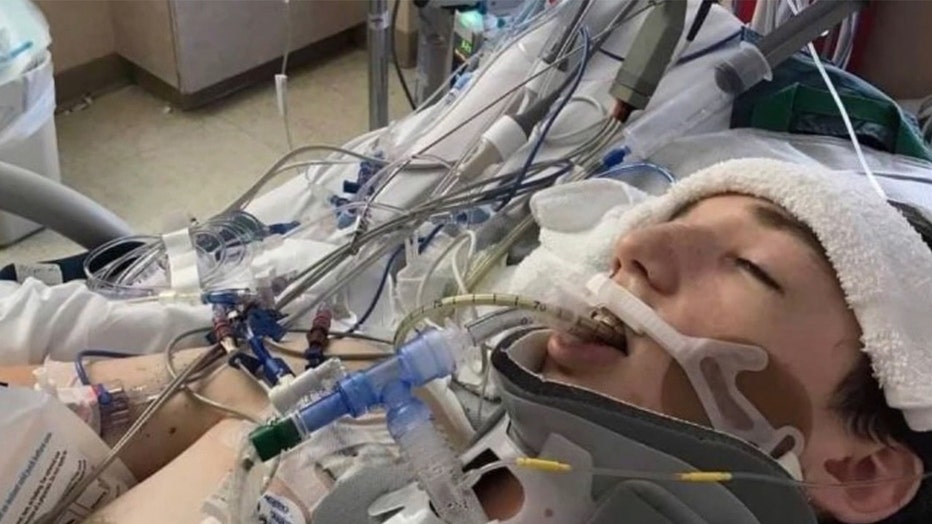 After Jacob Brewer was struck by lightning in Siesta Key Beach in 2020, he was in the hospital for three months. (Provided by Brewer famliy)

"It was a miracle he survived after going 45 minutes without a pulse," his mother Barbara Brewer wrote on a crowdfunding campaign website she created for Jacob. "He was in the ICU for two weeks and hospitalized for three months. He has spent the last 10 months working tirelessly on his recovery."

The Brewer family has traveled from their home in Keller, Texas to Jacksonville, where Jacob is undergoing 90 days of specialized medical treatment.

"He went 55 minutes without a heartbeat," Barbara told FOX 4 in Dallas last year. "We’ve had doctors tell us that Jacob is a miracle."

READ: Oklahoma unseats Florida as the lightning capital of the U.S., study finds

The teenager's dad, Jeremiah, added, "I’m amazed at his attitude towards it all. He has been a fighter. Of course, we have some downtime. Overall, he’s stayed positive, he’s cheerful."

A near-fatal lightning strike is trauma the family says they would not wish upon anyone else. On Friday morning, Jacob's mother joined public safety officials in Sarasota to warn others to take cover at the first clap of thunder.

Lightning safety has made headlines in recent days after Clearwater police posted photos of lightning on the beach, warning visitors that the beach is no place to be when lightning is near. "

Just ask any local meteorologist," they said in the Facebook post Wednesday. "These images were captured safely from inside one of our cruisers. An officer had to tell multiple people that they shouldn’t be on the beach for their own safety."

It's a message echoed Friday from the Brewer family and safety officials.