Orlando police officers played Secret Santa on Saturday, handing out presents to children in the communities they serve.

ORLANDO, Fla. - It's an Orlando police officer's job to be out in the community, but it was a special treat for them on Saturday, as they were decked out in Santa hats, giving out presents to children in the neighborhoods they serve.

“They're showing love for the community, which we very much need,” said Olympia Burks, watching officers giving out the toys.

Orlando Police bought the toys and gifts with money donated by OPD officers and staff. Every year they give out toys, but it's usually at big holiday parties. Of course, there's none of that, this year, so in 2020, they're bringing the toys to the tots.

“When I opened up gifts on Christmas day, it just brought so much excitement for me. I waited all year for it,” said Officer Marcus Hyatt, “so to see another kid have that expression, it just means the world to me.” 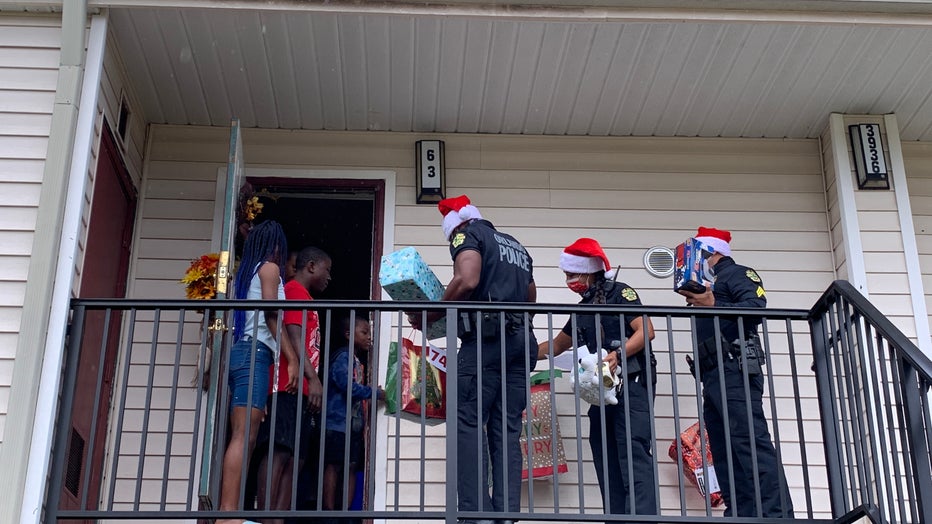 They delivered toys to more than 100 children at scheduled stops across the city. They also kept plenty of extra toys on hand to give out to any other kids they spotted along the way.

“People need to know us, they need to trust us. Part of bridging that gap is being more visible in the community. Showing people we're human, showing people we care,” Hyatt said.

Officer Hannah Crowe, who helped organize the event, said it was important to build bridges with the community.

“I think it's very important to serve our children because they need to grow up knowing that we're the good guys, we're here to help you. Especially right now, everyone can use some extra help over the holidays.”

Tune in to FOX 35 Orlando for the latest coronavirus news