The 25-year-old patient passed away at Doctor's Hospital in Sarasota Thursday.

Now, his memory lives on through organ donation.

Pastor Dan Yoder from Colonial Oaks Baptist Church said a prayer as the 25-year-old made his final trip through the hospital’s hallways.

“We are gathered here today in honor of this young man giving life to others and great tragedy in his own life,” said Yoder. “Be with the doctors as they administer to him and those later on.”

The young man’s mother and brothers walked behind as he was taken from the emergency room to the operating room. 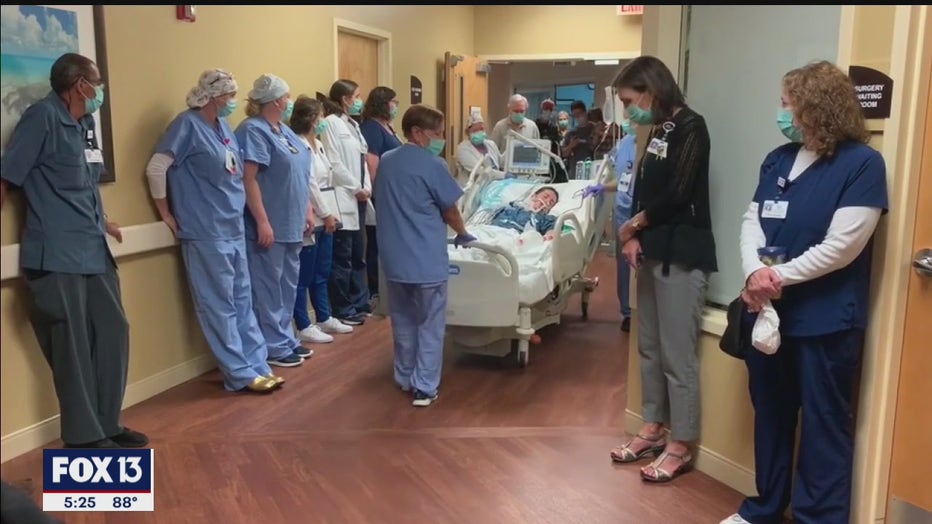 Staff at Doctors Hospital lined the hallways to honor a 25-year-old organ donor.

“It was heart-wrenching,” said Todd Cruz, a registered nurse and the director of critical care at Doctors Hospital. “There were a lot of tears yesterday from people who didn’t even know this young man.”

The man’s act of signing up to be an organ donor will possibly save five lives and change countless others.

“It was really a good opportunity to appreciate not only him and his family,” said Cruz. “You never really know the impact when you make that decision, he’s made a difference for somebody’s life across the nation.”

“Every day in the United States, roughly 22 people pass away because we don’t have enough organs to go around,” explained Ashley Moore of the Life Link Foundation.

“It provides hope and a second chance at life for more than 109,000 people that are currently waiting for a life-saving transplant in the United States,” Moore said.

For the next three days, Doctors Hospital will fly a flag bearing the the "Donate Life" as another way to honor the 25-year-old.