TAMPA, Fla. - Distance-learning has been going on for a little over a month now, but there are still thousands of students across the Bay Area who have not checked into their classes.

As of Friday morning,  school districts in Manatee, Polk and Hernando counties didn't have exact numbers on how engaged their students have been online. However, Pinellas County told FOX 13 they’ve had 98% engagement. That leaves 1,508 students who have been marked absent every day since distance learning began.

In Pasco County, they reported 1.55% of their students have had zero engagement which comes out to 1,071 students.

It’s a similar situation in Hillsborough County. Their engagement is at 99%, meaning just over 2,000 Hillsborough County students have fallen behind. Plant City High School, Shields Middle School and Oak Park Elementary were cited as their least-connected schools. 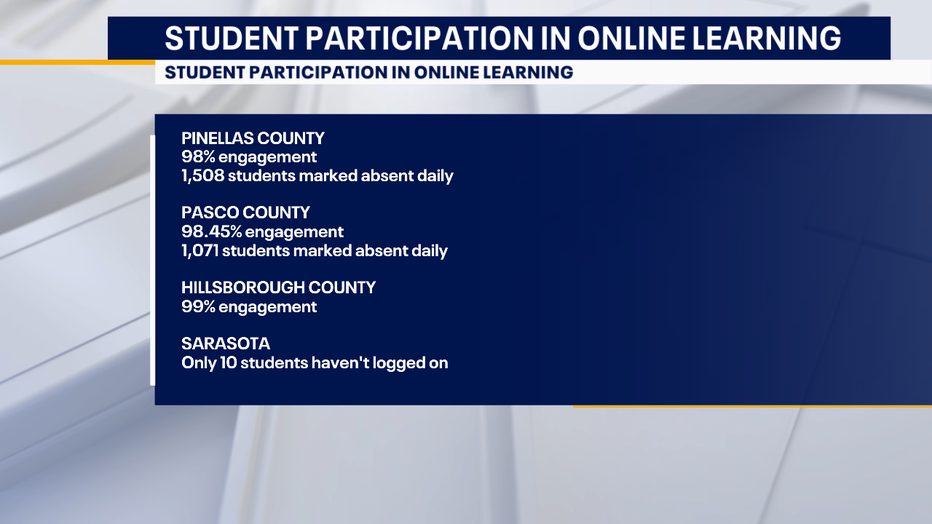 In Sarasota County, they’ve stated they only had about ten students not log in to their virtual learning platform out of the 44,000 who are currently enrolled.

Overall, the stats are encouraging, school officials said, but for the few thousand students who haven’t been accounted for across the Bay Area, district leaders stated there’s still a chance for students to catch up.

If students do not have access to resources, such as laptops or wifi, district leaders are encouraging them to reach out.

Editor's note: An earlier version of this story incorrectly referenced Plant High School as one of the least-connected schools. This version has been updated.