'You're out of line': Parkland judge, defense attorneys shout at each other during Nikolas Cruz sentencing hearing

Defense attorneys for Parkland shooter Nikolas Cruz objected to statements made by families of the victims, some of which they said called "attacks" on the defense and their children. But the hearing quickly erupted into a shouting match between the attorneys and Circuit Judge Elizabeth Scherer, who told two of the attorneys they were out of line and instructed them to "sit down."

FORT LAUDERDALE, Fla. - Families of the 17 children and staff members Parkland school shooter Nikolas Cruz murdered cursed him to hell, wished him a painful death and called him a coward Tuesday as they got their one chance to address him directly before he is sentenced to life in prison.

For hours, parents, wives, siblings, children and some of the 17 Cruz also wounded at Marjory Stoneman Douglas High School on Valentine's Day 2018 stood 20 feet from him. They looked the shackled killer in the eye and gave vehement, angry and sometimes tearful statements. Most decried that his jury did not reach the unanimity required to sentence him to death.

Most decried that his jury voted 9-3 for death but did not reach the unanimity required under state law for that sentence to be imposed.

Cruz, 24, stared back at them, dressed in a bright red jail jumpsuit, showing no emotion behind a COVID-19 face mask. 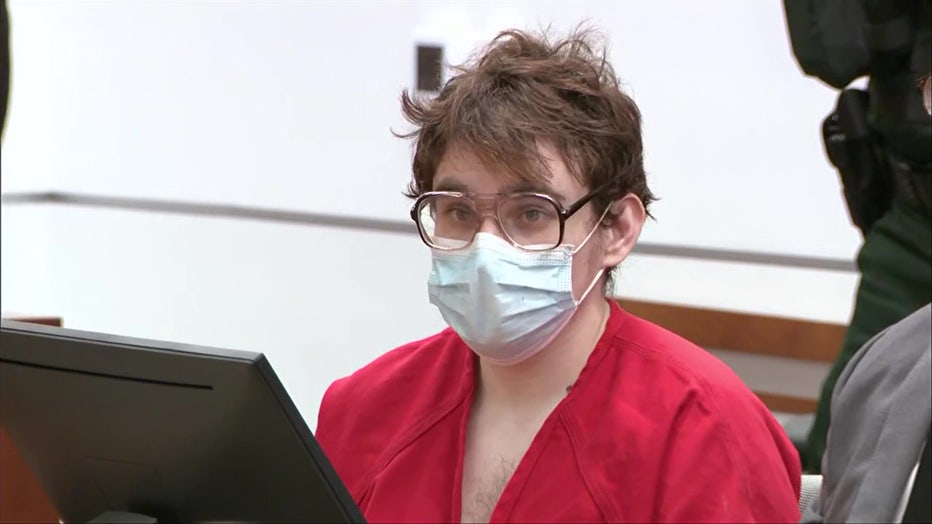 Parkland shooter Nikolas Cruz listens as families of his victims speak during his sentencing hearing.

The two-day hearing will conclude Wednesday when Circuit Judge Elizabeth Scherer formally sentences him to life without parole.

As Tuesday's hearing got underway, prosecutors told Circuit Judge Elizabeth Scherer that one victim's family would not be present: Aaron Feis, one of the three staff members killed in the shooting, would not have any family members speaking since his mother passed away Oct. 27.

‘You are a monster’

Debra Hixon — the wife of athletic director Chris Hixon, a Navy veteran who died trying to stop the Feb. 14, 2018, shooting at Marjory Stoneman Douglas High School — was the first to address Cruz.

Chris Hixon was wounded and fell to the floor, where Cruz shot him again. He spent more than 10 minutes trying to get back on his feet before he died.

"You were given a gift, a gift of grace and mercy — something you did not show to any of your victims," Debra Hixon told Cruz. "I wish nothing for you today. After today, I don’t care what happens to you. You’ll be sent to jail, you’ll begin your punishment, you’ll be a number, and for me you will cease to exist."

The wife, sister, and son of Marjory Stoneman Douglas High School athletic director Chris Hixon walked up to the podium one by one to address Nikolas Cruz directly for the first time. "You are unfortunately living proof that evil does exist in this world," Hixon's son, Thomas, said. "You are going to be relegated to a name on a tombstone that no one ever visits."

Family members and a teacher told Cruz they were disappointed in the jury's sentencing recommendation, which will send him to prison for life, instead of putting him to death.

"We hope that you, the monster who did this to our son, endure a painful existence in your remaining days. Whatever pain you experience in prison unfortunately will be a fraction of what Ben endured," said Eric Wikander, the father of student Ben Wikander, who has undergone seven surgeries.

RELATED: The victims of the 2018 Parkland high school massacre

Stacey Lippel was a teacher at the school and was wounded in the mass shooting.

"I will live with this until my last breath," she said. "The only comfort I have is that your life in prison will be filled with horror and fear. So my hope for you is that you die sooner rather than later."

'You are a monster': Wounded Parkland teacher addresses Nikolas Cruz in court

Stacey Lippel was a teacher at Marjory Stoneman Douglas High School on Valentine's Day, 2018, and was wounded in the mass shooting. During Tuesday's sentencing hearing, she addressed Nikolas Cruz directly, telling him, "The only comfort I have is that your life in prison will be filled with horror and fear. So my hope for you is that you die sooner rather than later."

Lippel old Cruz she was "broken and altered," saying she was left with feelings of guilt after surviving the shooting when so many others died.

Before Lippel walked away from the podium, Circuit Judge Elizabeth Scherer briefly stopped her, telling her, "You are a hero. That's how myself and my staff will remember you: You were a hero to those children that day, so thank you for your service."

"This creature has no redeemable value," said Max Schachter, whose 14-year-old son Alex died when he was shot through a classroom window. Speaking at Cruz but refusing to say his name, he said he hopes "other prisoners you will encounter in your new life will inflict that pain upon you, hopefully 17 times over again, until you are screaming for mercy, just like your victims."

Schachter said that it was his birthday and that when he blew out his cake's candles Tuesday night, he would wish Cruz a painful death — and would every year until it happens.

Some of the families verbally attacked Cruz's public defenders, accusing them of misleading three of the 12 jurors into believing his birth mother's excessive drinking had left him brain-damaged and unable to control himself. Some hoped that their consciences would always haunt them forever and would experience the pain they have felt, with at least one parent mentioning the attorneys' children.

"The legal system should protect and impart justice, justice, justice," Patricia Oliver said, leaning over the lectern toward the defense attorneys and accusing them of "shameful, despicable behavior." Cruz wounded her 17-year-old son Joaquin in the leg and then tracked him into a bathroom alcove. There, Cruz fatally shot her son in the head as he raised his hand to protect himself.

"If this, the worst mass shooting to go to trial, does not deserve the death penalty, what does?" she said.

Lead defense attorney Melissa McNeill eventually asked Circuit Judge Elizabeth Scherer to stop the families from attacking her and her colleagues directly, saying they had worked within the parameters of Cruz’s constitutional rights in defending him.

"I did my job and every member of this team did their job, judge, and we should not be personally attacked for that, nor should our children," McNeill said to Scherer, drawing a murmur from where the families sat. "Your Honor should be maintaining the decorum in this courtroom."

Prosecutor Carolyn McCann retorted that the defense's objection was "unconscionable," telling Scherer that the victims have the right under state law and the Constitution to "express themselves and be heard."

"The defendant has taken the lives of these people's family members, their children, their husbands, their sons; and now the defense attorneys want to take the voice of the survivors, the victims, and curtail their rights under Florida law," McCann said.

McNeill pressed on, insisting that Scherer instruct the families to not "attack" defense council, the judicial system, or the jurors in the case.

That's when Scherer cut McNeil off, saying she'd heard enough: "Ms. McNeill, stop suggesting that I know that something is impermissible and that I am allowing it to happen. You're finished. I've heard your objection. It's noted."

The argument resumed after lunch, with Scherer yelling at and ejecting one of McNeill's assistants. The assistant had asserted that the judge would be more concerned about the statements if the parents had mentioned Scherer's own children.

"You need to sit down, you're out of line. In fact, you're excused. Go to the back of the room now," Scherer told one assistant attorney after he brought up the judge's children. "That just violated about every rule of professional responsibility."

It wasn't the first time Scherer and the defense faced off. When Cruz's attorneys suddenly rested their case after only calling about 25 of their 80 planned witnesses, Scherer blasted the attorneys for their unprofessionalism, leading to McNeill and Scherer both raising their voices with each other in the courtroom. The two have had a testy and sometimes hostile relationship since pretrial hearings.

When will Nikolas Cruz be sentenced?

After the families of the dead and the 17 people Cruz wounded finish speaking, Scherer will formally sentence him Wednesday to life in prison without parole. She has no other option, as the jury in his recently concluded penalty trial could not unanimously agree that the 24-year-old former Stoneman Douglas student deserved a death sentence.

The families gave emotional statements during the trial but were restricted about what they could tell jurors. They could describe only their loved ones and the toll the killings had on their lives. The wounded could say only what happened to them.

They were barred from addressing Cruz directly or saying anything about him — a violation would have risked a mistrial. And the jurors were told they couldn’t consider the family statements as aggravating factors as they weighed whether Cruz should die.

One family member who chose not to speak directly to Cruz is Fred Guttenberg, whose 14-year-old daughter Jaime was shot in the back as she tried to flee.

He tweeted Tuesday that it won't change anything if he addresses "the monster" who murdered his daughter, the defense team he believes "gave up its humanity" to defend him or the teacher he says faked heroism.

Moments after the jury recommended life in prison for Nikolas Cruz, the parents of Alyssa Alhadeff, a 14-year-old girl who was one of the 17 shooting victims, spoke, saying they are disappointed with the verdict. "The jury let us down. They didn’t go by the evidence," said Dr. Ilan Alhadeff.

Cruz's attorneys say he is not expected to speak. He apologized in court last year after pleading guilty to the murders and attempted murders, but families told reporters they found the apology aimed at garnering sympathy. He fired 140 shots during his seven-minute attack, which he had planned for seven months.

That plea set the stage for a three-month penalty trial that ended Oct. 13 with the jury voting 9-3 for a death sentence. Jurors said those voting for life believed Cruz is mentally ill and should be spared. Under Florida law, a death sentence requires unanimity.

Prosecutors argued Cruz planned the shooting for seven months before he slipped into a three-story classroom building, firing 140 shots with an AR-15-style semi-automatic rifle down hallways and into classrooms. He fatally shot some wounded victims after they fell. Cruz said he chose Valentine’s Day so it could never again be celebrated at Stoneman Douglas.

Cruz’s attorneys focused on their belief that his birth mother’s heavy drinking during pregnancy left him brain-damaged and condemned to a life of erratic and sometimes violent behavior that culminated in the massacre — the deadliest U.S. mass shooting to go to trial.