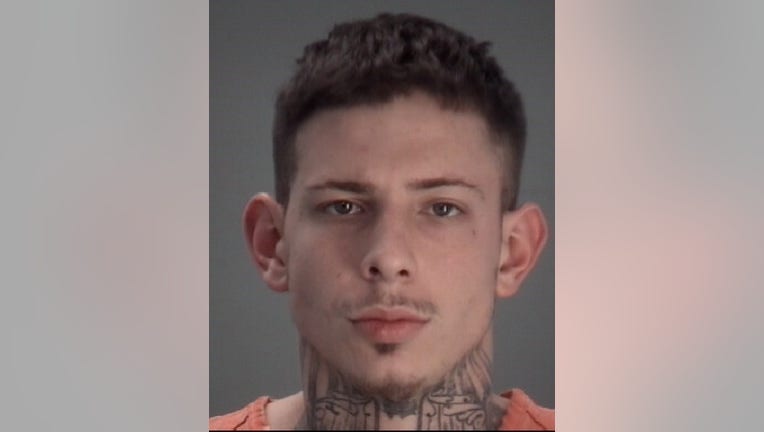 HOLIDAY, Fla. - Pasco County deputies said they arrested a 21-year-old suspect for the murder of a victim found in a burned vehicle in Holiday near Baillies Bluff on November 1.

Deputies said they began investigating Michael Psilakis Jr.’s involvement when the victim’s mother contacted the Pasco County Sheriff’s Office after relatives couldn't get in contact with the victim since October 30. Authorities have identified the victim, but have not publicly named him.

The victim’s mother told deputies she was informed her son was last seen with Psilakis, an “acquaintance.” Investigators said the victim was apparently last seen driving a Ford Taurus rental from Hertz. It was reported stolen to the Tarpon Springs Police Department. The burned-out vehicle that the victim was found inside was a Ford sedan. It’s unclear whether it was a Taurus.

Psilakis told deputies he last saw the victim on October 30 around 8 p.m. after dropping him off at his mother’s home on Mayfrield Drive in Port Richey. A deputy asked Psilakis if he had any burns on his legs. According to his arrest affidavit, he initially said he didn’t, but later showed the deputy his right shin, which revealed a large blister that looked like a burn.

PREVIOUS: Deputies find burned car with body inside in wooded are of Pasco County

The deputy said he noticed what appeared to be blood “oozing” through both of Psilakis’ socks. Psilakis told the deputy he dropped hot oil on his leg, but then changed his story to say his girlfriend was upset and threw hot oil at him at their Hudson home, according to court documents.

The deputy said Psilakis appeared nervous and his injuries didn’t appear consistent with his explanation.

During the investigation, a deputy spoke to an unidentified witness who said he attended a card game at a Port Richey home on October 29. Both the victim and Psilakis were in attendance.

Deputies said the witness told them the victim won $1,000 from Psilakis. Psilakis asked for it back – but the victim said he won the money “fair and square.”

The witness, according to the arrest affidavit, said Psilakis asked, “Should I kill this n-----?”

Between 2 p.m. and 3 p.m. on October 30, Psilakis called the witness saying he was hanging out with the victim and he was still “thinking about” shooting him, deputies said. The witness also told deputies that Psilakis carried a handgun.

On November 1, the sheriff’s office received a call about the burned vehicle in Holiday, east of Baillies Bluff Road, near Key Vista Nature Park. They said the body inside was so badly burned that they couldn’t immediately identify the victim.

An hour after the discovery, Psilakis’ mother met with a detective after she discovered apparent blood in her garage. The detective said he noticed what appeared to be blood on the exterior of a vehicle and on appliances.

While the detective was still with the mother, Psilakis called her. The detective said his mother allowed him to record the conversation. During the phone call, she asked him how he received the marks on his legs. He said he was putting gas in a car, “it blew back on him and engulfed him,” according to his arrest affidavit.

Soon after, Psilakis arrived at her home in a stolen black Toyota Tacoma, deputies said. A search warrant was executed, and deputies said inside the stolen vehicle, they found a stolen black Glock 19 9mm handgun. They said it was taken during a home burglary in a separate case. Psilakis was arrested in connection to that case.

Deputies said they also obtained a search warrant on Psilakis’s cell phone, and found the following searches in his web history from October 30:

Detectives said they followed up with a witness, who said, Psilakis was texting her for most of the day and evening on October 30 saying he was with the victim. At 9:56 p.m. that day, detectives said she received a text message saying, “I just got 3 degree burn.”

The witness told deputies that sometime between November 2 and 3, she found Psilakis’ clothing in her washing machine from October 30. She said, according to deputies, that she found blood on the back of his boxer briefs.

By the afternoon, testing for the five 9mm shell casings found at the burned-out vehicle was completed. One of the casings was found on the roof of the vehicle, while the other four were found inside and were too charred to be tested.

Authorities said the testing confirmed that the Glock handgun found inside Psilakis’s vehicle was used to fire the shell casing.

On November 6, officials confirmed the individual found in the burned-out vehicle was the victim.

Psilakis was arrested on November 8 for murder.