NEW PORT RICHEY, Fla. - A team of Pasco County students has been given an honor that's out of this world. Their experiment is going into space.

Their experiment was selected to be tested by astronauts on the International Space Station.

With gloves on their hands and a burning question on their minds, these students are looking to the universe for answers.

Shelly Nonnenberg, Amanda Marrero and Emily Null, biomedical sciences students at Wendell Krinn Technical High School in New Port Richey, were chosen out of more than 29,000 students from the U.S., Canada, and Brazil to have their experiment blasted up to the ISS.

"I ran out in the hallway and was like, 'Oh my gosh! I can't believe we did it,'" Marrero said. "We just gave each other a big hug."

The trio of budding scientists wants to know what effect, if any, microgravity has on the effectiveness of the antibiotic amoxicillin in killing bacteria that causes staph infections.

"Astronauts are really susceptible to this type of bacteria," Marrero said. "It's on surfaces, in your nose, on your body, any type of surface, it's really easy to get."

The astronauts will run the experiment in zero gravity while students carry out an identical experiment on earth.

"They open one of the clamps and the bacteria will re-hydrate in the broth, and then we have amoxicillin in another clamp," Nonnenberg said, demonstrating the experiment. 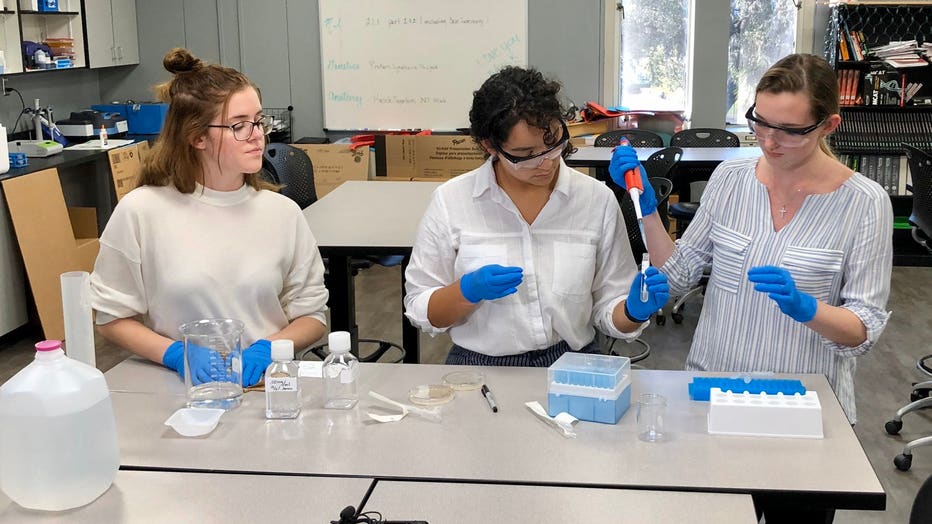 "We are assuming that the microgravity will not affect how it grows," Nonnenberg continued. "The bacteria will not grow. The antibiotic will still kill it."

It took a lot of time, research, trial, and error - and teamwork.

"We put our faith, our mind, body, and soul into this project," Marrero said.

All of that paid off when they learned theirs was one among 34 projects selected by a national review panel for this year's Student Spaceflight Experiments Program, Mission 14. There were nearly 4,000 submissions.

"It's probably the best thing that's ever happened in my teaching career. It's incredible to see students work so hard," said Sarah Kumar, the biomedical teacher.

The sky's not always the limit. These young women prove it.

"It could save lives, not only astronauts," said Emily Null. "It's a big dream and it's surreal. I don't think it's set in for any of us that we actually made it this far."

Hillsborough County Schools will also send a project up to the ISS. This will be the district's seventh flight.

As for the Wendell Krinn students, all three have aspirations of working in the medical field.