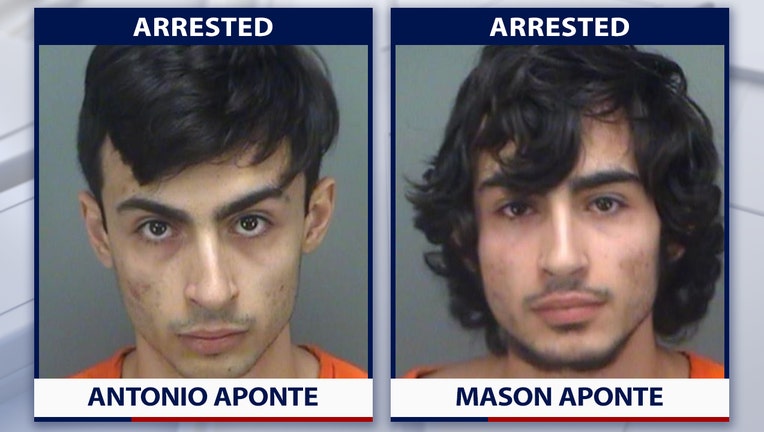 According to the Pinellas County Sheriff’s Office, patrol deputies were dispatched to the Holiday Inn Express in Oldsmar after several guests complained of a strong odor of marijuana on their floor around 10:30 p.m. on July 13.

Deputies said they knocked on the door where the odor was coming from and met with the Aponte brothers. According to deputies, they noticed the odor was very strong when the door opened. Mason Aponte allowed deputies to enter the room to show them he only had a small bag of marijuana in the room, according to PCSO.

In plain-view, deputies said they observed several pounds of marijuana packaged individually, more than 100 suspected THC oil cartridges, smoking pipes, one AR-15 rifle, and six handguns. One of the handguns was stolen, according to PCSO.

Deputies, in conjunction with the State Attorney's Office, obtained a search warrant for the room and conducted an in-depth search. Investigators said they uncovered an AK-47-style rifle, several more pounds of marijuana and an M12 distraction device. Also inside the room was $36,415 packaged with rubber bands in various denominations, according to PCSO.

The suspects did not provide a statement to investigators and were taken to the Pinellas County Jail.

In total there were six pistols, one AR-15, one AK-47, 67 pounds of marijuana, 82.5 doses of Alprazolam and 363 suspected THC oil cartridges were taken as evidence from the hotel room, according to PCSO.

Through various investigative leads, detectives said they identified a storage unit connected to the suspects and obtained consent to search it. Inside they discovered an additional $103,468. The money totaled out to $139,883 which was seized under the Florida Contraband Forfeiture Act, according to PCSO.