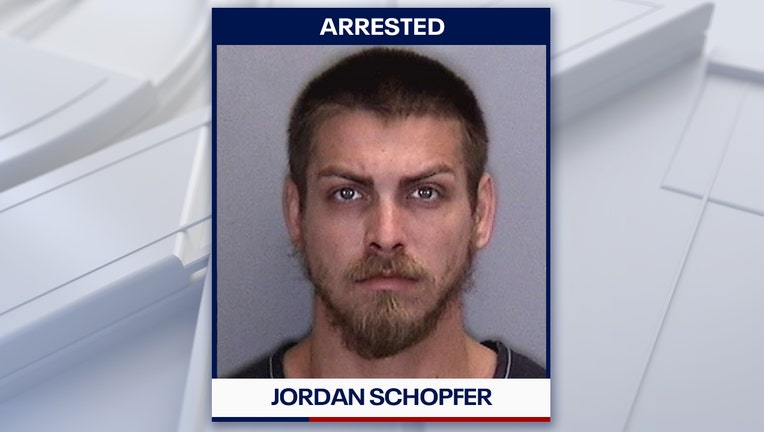 SARASOTA, Fla. - A Bradenton man was arrested this week in connection to a deadly crash in Sarasota that occurred back in June. Investigators said he "huffed or snorted" nitrous oxide to "get high."

Sarasota police detectives said 30-year-old Jordan Schopfer was high on nitrous oxide when he drifted into oncoming traffic before hitting and killing a motorcyclist. The crash occurred around 5:30 p.m. on June 12 in the southbound lanes of North Beneva Road.

The motorcyclist, a 60-year-old man from Sarasota, died. Police did publicly identify him, citing Marsy's Law.

At the time, witnesses told police the motorcyclist was traveling south while Schopfer -- driving a 2002 Toyota Corolla -- was initially heading northbound in the outside lane. Police said, according to those witnesses, Schopfer moved from that lane to the inside lane "but made no effort to correct the vehicle."

"Schopfer continued driving at an angle over the raised concrete median and into the southbound lanes, hitting the motorcyclist, according to witnesses," police said in a news release.

Officers said they found a can of compressed air and a receipt showing it was purchased 12 minutes before the crash. They also found a "restaurant-style whipping container" inside the vehicle as well.

"The vehicle was seen on camera nearly hitting a pedestrian in the parking lot as well as rear-ending a parked car," according to the Sarasota Police Department.

On June 26, detectives said they determined Schopfer did "get high" off the nitrous oxide.

"Initial effects of inhalant abuse are similar to those of anesthetics:  simulations, disinhibition, and euphoria," according to a news release by the agency. "These sensations may be followed by hallucinations and general depression including slurred speech and drowsiness or sleep within seconds to minutes."

Schopfer faces charges of vehicular homicide, manslaughter, and driving with a suspended license with knowledge. When the crash occurred, police said Schopfer had previous suspensions for DUI and failed to pay a traffic fine from 2020.

Records show he was booked into Manatee County Jail on Oct. 19 for violating probation. He remains in custody.