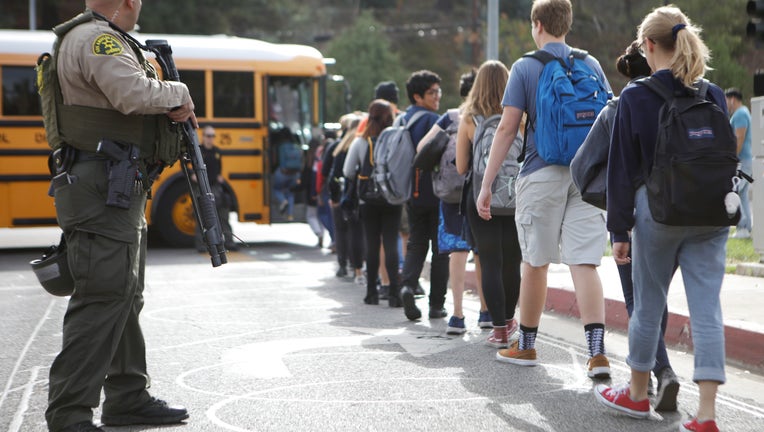 SANTA CLARITA, CALIFORNIA - NOVEMBER 14: Students are evacuated from Saugus High School onto a school bus after a shooting at the school left two students dead and three wounded on November 14, 2019 in Santa Clarita, California. A suspect in the shoo

They believe he planned the attack that killed two students and wounded three others at a Southern California high school, but investigators were so far unable to find out why he brought a gun to campus and opened fire, authorities said Friday.

After more than 40 interviews and evaluation of evidence, no motive had been established, said Capt. Kent Wegener, of the Los Angeles County Sheriff’s Department’s homicide unit. He said no manifesto, diary or suicide note had been found.

“It still remains a mystery why,” Sheriff Alex Villanueva told a press conference.

The teenager opened fire on his birthday Thursday morning after being dropped off by his mother at Saugus High School in the Los Angeles suburb of Santa Clarita.

Nathaniel Tennosuke Berhow fired the final bullet into his own head. He died at 3:32 p.m. Friday at a hospital with his mother present, according to a Sheriff’s Department statement.

The shooting in an outdoor plaza took just 16 seconds and was recorded on security video, authorities said.

The teen stood by himself, did not appear to interact with anyone and then walked to the center of the quad, Villanueva said.

“As far as we know the actual targets were at random,” the sheriff said.

The sheriff said the conclusion that the attack was planned was based on the shooter bringing the weapon, handling it with enough expertise and counting the rounds fired.

The origin of the gun was being investigated.

Three off-duty law enforcement officers were first on the scene and treated some of the wounded until paramedics arrived.

The dead were identified as 15-year-old Gracie Anne Muehlberger and 14-year-old Dominic Blackwell.

The names of the wounded students were not released.

Doctors said Friday morning that two girls, ages 14 and 15, who were both shot in the torso, were doing well and should be released from the hospital over the weekend. A 14-year-old boy was treated and released from another hospital, authorities said.

The suspect was described as a quiet and smart kid who was a Boy Scout and had previously run track for his school.

“You have the image of a loner, someone who is socially awkward, doesn’t get along, some violent tendencies, dark brooding and online strange postings — stuff like that,” Villanueva said. With this boy, investigators have found “nothing out of the ordinary. He’s a cookie cutter kid that you could find anywhere.”

In fact, the stereotype of the loser sociopath is often inaccurate, according to the psychologist who wrote federal guidelines for assessing school shooting threats and has interviewed 10 shooters.

What pushes most shooters is some kind of loss or disappointment, often recent, followed by the inability to cope with a feeling of being overwhelmed, according to Marisa Randazzo, a former chief research psychologist at the U.S. Secret Service.

“These are acts of suicide as much as homicide,” said Randazzo, who is now CEO of a firm that does threat assessments.

Most shooters she studied were academically successful and weren’t social outcasts.

Friends said while the boy could be introverted, he had a girlfriend and good social network focused on his cross-country teammates.

Randazzo said she expects investigators will learn that someone had an inkling of trouble.