MULBERRY, Fla. - Before becoming a Polk County deputy, Blane Lane always knew he wanted to rise the ranks and take over the sheriff's office  – but his promising future was cut short after he was shot and killed in the line of duty.

Lane was struck by friendly fire as a team of deputies tried to arrest a drug suspect during the overnight hours in Polk City. His loved ones and the people who knew him in high school said the 21-year-old had a whole career ahead of him.

Lane graduated from Mulberry High in 2020 with dreams of becoming a law enforcement officer. He enrolled in the police academy soon after graduating. 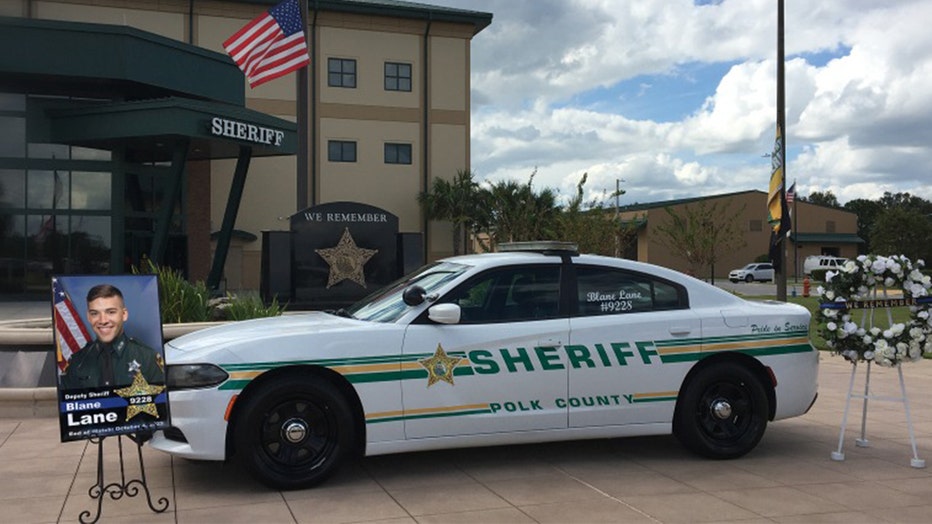 Even when he was in fifth grade, at Scott Lake Elementary, he knew he wanted to be the next Polk County sheriff.

During his high school career, Lane played football and golf. He liked to go fishing and was also active in the Future Farmers of America.

"He was a charismatic type of kid, a nice, enjoyable young man," said Kevin Wells, Lane's former football coach. "He just wanted to be the life of everything happening around here."

Michael Young, the principal of Mulberry High, said Lane was one of the students you rooted for and wanted to see succeed.

"He was full of life — always had a bright smile and was friendly and respectful, had lots of friends," Young said in a statement. "He was just an upstanding young guy."

Lane was sworn in as a detention deputy in May 2021, and became a patrol deputy in January 2022, said Sheriff Grady said. 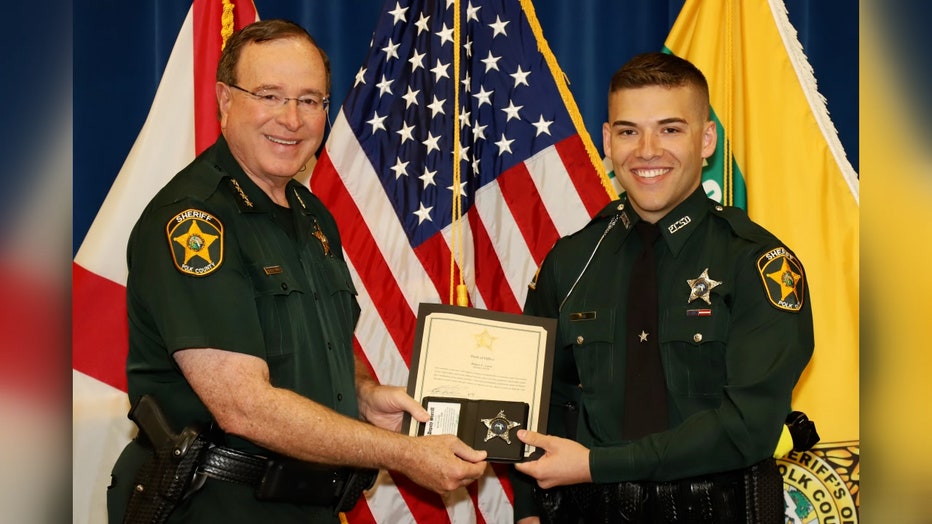 "His goal was to be the next sheriff of Polk County," said Justin Stewart, a pastor at Together Church in Lakeland. "He was one of the most enthusiastic young men I have ever met. He had a lively spirit about him. He was made for this job. I can not say enough about him."

Lane leaves behind a 3-year-old child. His funeral is scheduled for next week.

"He's the epitome of what American law enforcement is about. It's young men and young women that stand in the gap that put their life on the line every day," said Sheriff Judd. "So, you see a young man. I see a colleague. And that's younger than my children. This is like losing one of your kids."

Loved ones and fellow law enforcement officers are mourning the loss of a 21-year-old Polk County deputy who was killed by gunfire from a fellow deputy's gun while serving a warrant in Polk City early Tuesday morning.

Early Tuesday morning, Deputy Lane and his team received a tip that 46-year-old Cheryl Williams was at home in Polk City. She had failed to appear on a possession of meth charge, officials said.

When they arrived at the home on Foxtown South, Lane went behind the trailer to make sure no one escaped. Sheriff Judd said the three deputies inside the trailer opened fire after Williams pointed a gun at them, later determined to be a "very realistic-looking" BB gun. Two bullets struck her but another went through the back wall and struck Lane.

He was hit in the arm, but the bullet went into his torso. He was taken to Lakeland Regional Hospital where he passed away.

The Polk County Sheriff's Office is mourning the loss of 21-year-old Deputy Blane Lane, who was shot and killed in the line of duty early Tuesday morning when he and fellow deputies attempted to serve a felony warrant. Sheriff Grady Judd said when the suspect pointed a gun at the deputies, two of them opened fire. Two of their bullets hit the suspect, but one went through the wall of the trailer and accidentally hit Lane, who was in a concealed tactical position outside.

Lane was one of the youngest deputies at the agency, and was sworn in just eight months ago, the sheriff said.

"You can legally be a deputy at 19 years of age," Sheriff Judd explained. "I can tell you this, there has not been a deputy at that young age that performed at that high level. He is just professional at every sense. Just remarkable."

Judd believed he could have, one day, been the next sheriff.

Judd said the shooting appeared to be an attempt of "suicide by cop."

Deputies interviewed a witness after the fact, who told them that when Williams realized deputies were in the trailer, she picked up the BB gun and walked away from him. When the witness warned her, "You don't want to do that," he said she replied, "Let them in."

The Polk County Sheriff's Office has charged Williams with 13 felonies in Lane's death:

Williams remains in the hospital in stable condition, and will be booked into the Polk County Jail upon her release, investigators said. 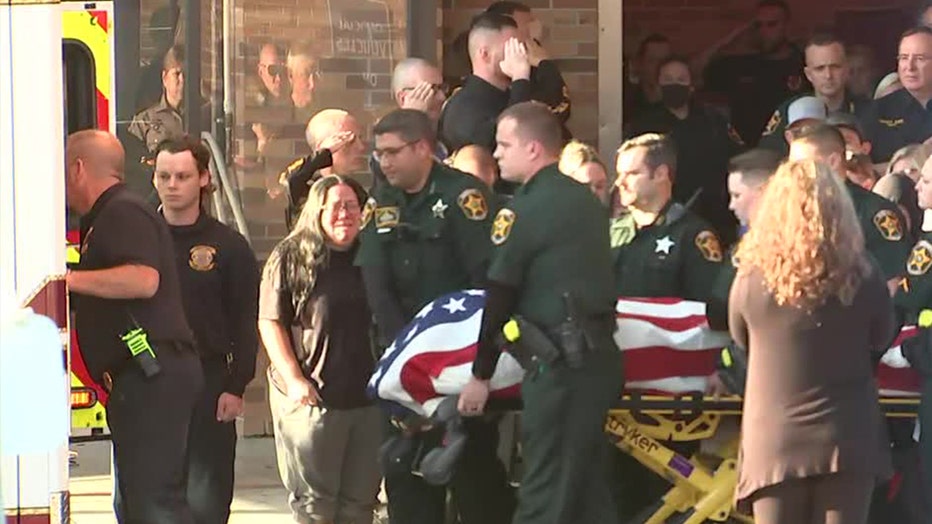 Body of Polk County deputy placed into ambulance before procession.

An emotional procession was held Tuesday morning. Tears were falling as deputies carried the casket and placed it inside a Polk County Fire Rescue ambulance.

Patrol cars were used to block traffic, clearing the route to the medical examiner's office. Law enforcement officers stood outside, saluting the fallen deputy as the procession passed by. 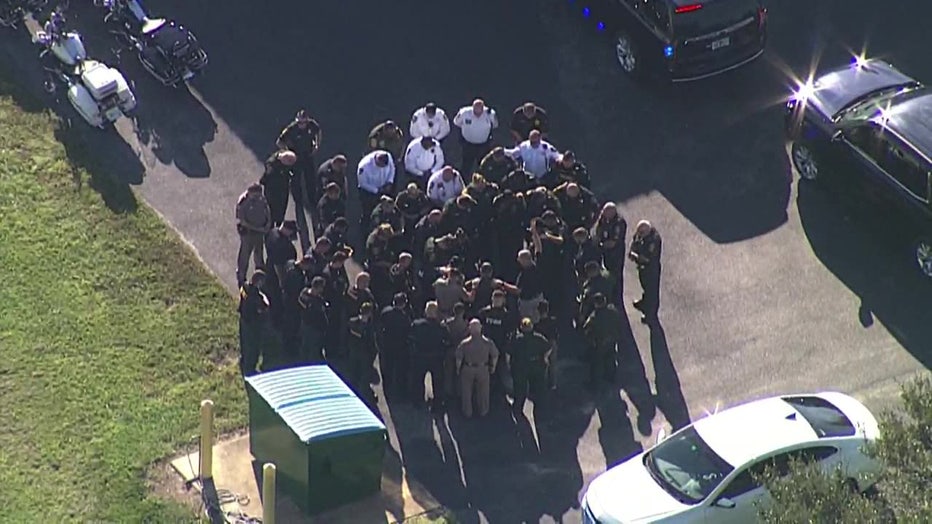 Law enforcement officers gather to pray outside the medical examiner's office following the death of a Polk County deputy.

Drivers heading in the opposite directions stopped in their lanes and stood outside their vehicles to watch for themselves. After arriving at the destination, officers gathered in a circle to pray.

A candlelight vigil will be held for Lane at the youth football field at 321 Kid Ellis Road in Mulberry Thursday night, and it will start at 6 p.m.