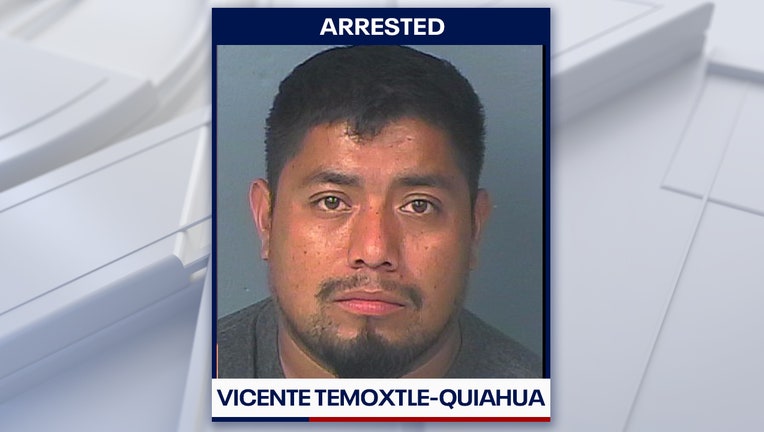 BROOKSVILLE, Fla. - For the second day in a row, Florida troopers arrested a human smuggling suspect during a traffic stop in Hernando County.

On Tuesday, a trooper a white Nissan Pathfinder heading south on Interstate 75 near Brooksville. According to FHP, the driver was traveling at 77 mph in a 70 mph zone, and the rear window tint was non-transparent. A traffic stop was initiated, and a second trooper arrived to assist.

FHP says the trooper who first spotted the vehicle approached the passenger side and tried to speak to the driver, but there was a language barrier. Instead, the driver's 15-year-old son, who was sitting in the second row on the far right, helped to translate.

Through the conversation, the driver admitted he didn't have a license but provided a Mexican passport, according to a narrative report from FHP. The driver was identified as 29-year-old Vicente Temoxtle-Quiahua, who lives in Mulberry. A three-year-old child was seated in the second row. The front-right passenger was identified as the registered owner of the Nissan.

Troopers said the children's parents are the driver, Temoxtle-Quiahua, and the mother, who is the registered owner and was in the vehicle. Also, troopers spotted food and drinks inside the vehicle, along with face masks.

In the third row, troopers noticed an adult male concealed by luggage.

A trooper asked the still-unidentified man to exit the Nissan, and he did. Another trooper, who is a native Spanish speaker, spoke with the man during a phone call. The man identified himself as 21-year-old Geronimo De Agua Garcia.

During the phone conversation, De Agua Garcia admitted he was picked up in Colorado and was supposed to be taken to Plant City. He also said he was in the country illegally, troopers said.

Troopers said they conducted a license plate reader of the Nissan's Florida tag and learned the vehicle was in Georgia earlier in the day. They also found receipts from multiple states between Florida and Colorado.

Another trooper arrived at the I-75 scene and began interviewing Temoxtle-Quiahua after reading him his Miranda Rights. During the conversation, Temoxtle-Quiahua said his cousin "Raul" asked him to travel to Colorado to transport an undocumented man back to Plant City. The man, now known as De Agua Garcia, was supposed to pay Temoxtle-Quiahua $1,500, plus gas, according to FHP.

The number of human smuggling cases are on the rise in the Bay Area. Since October, Florida Highway Patrol reports they've investigated at least two dozen human smuggling operations across seven counties.

By Monday, Temoxtle-Quiahua was contacted by De Agua Garcia. The Polk County man traveled to a gas station to pick him up. He told troopers it was his first time meeting De Agua Garcia, according to FHP.

He was supposed to take De Agua Garcia to Plant City to meet a man named, "Sergio," according to troopers.

A U.S. Border Patrol agent took custody of De Agua Garcia after confirming he was in the country illegally.. He was previously deported in November 2021.

Temoxtle-Quiahua was booked into Hernando County Jail on a human smuggling charge and driving without a license.