An accused killer is off the streets. The man wanted for a murderous crime spree in Polk County was captured in Georgia over the weekend.

FROSTPROOF, Fla. - Polk County deputies said the suspect who raped a woman, shot an elderly woman in the foot, and fatally shot another elderly woman before trying to set her home on fire was found in Atlanta.

Officials said 30-year-old Taiwan Blandin of Frostproof was arrested in Atlanta after carjacking a victim around 2:30 a.m. Saturday. Atlanta police officers spotted the stolen Honda vehicle a short time after, and attempted a traffic stop, but Blandin fled, they said.

He crashed the vehicle, and attempted to run away from police, officials said. He was arrested, but was hit with a stun gun while resisting.

Police said a white female passenger, who was not the carjacking victim, was also with him. Police did not identify her, but she was arrested. Inside the stolen vehicle, police said they found gloves and a handgun.

"We are grateful that this violent, armed, and dangerous suspect is in custody and his crime spree has come to an end,” Polk County Sheriff Grady Judd said in a statement. “The Atlanta Police Department did an awesome job. Based on the felonies he's racked up, he likely won't spend another day on the street. He's behind bars where he belongs."

Judd said the crime spree started on the morning of October 1 when Blandin showed up at his first victim's house in Fort Meade and broke in. The victim said she woke up to find him standing naked. He allegedly said he was going to rape her, but she resisted. That's when Blandin allegedly pulled a knife and held it to her throat while he raped her. The victim said Blandin grabbed two handguns and two shotguns from her home, bound her wrists and ankles, wrapped her in a blanket, put her in the backseat of her own car, and drove away. 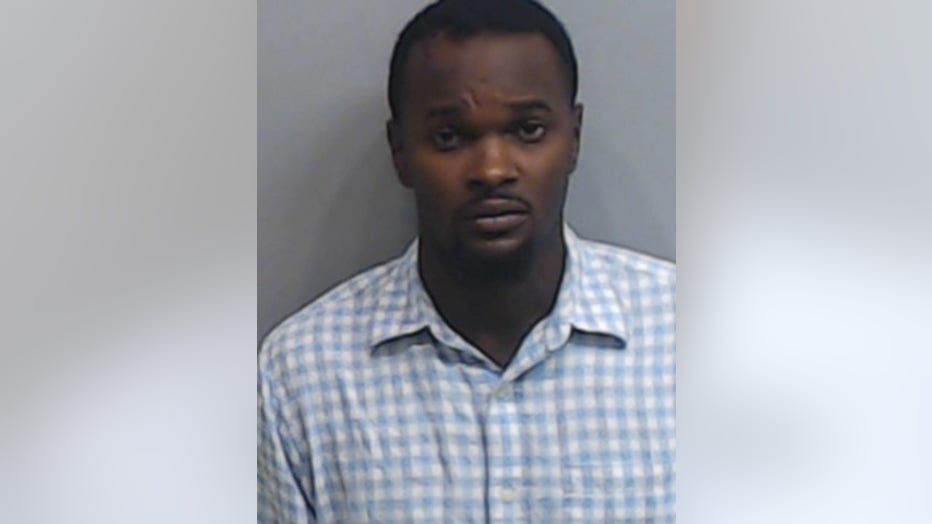 Taiwan Blandin is suspected of raping a woman, shooting an elderly woman in the foot, and killing another elderly woman in Polk County. Detectives said he was caught in Atlanta. (Atlanta Police Department)

The victim said she had been trying to remove the bindings from her arms and legs and, when Blandin went inside the mobile home, she broke free, got in the front seat, and took off. The victim told deputies Blandin had taken her cell phone, so she drove back to her house and asked a neighbor to use the phone so she could call for help.

Minutes later, the victim said Blandin sped up driving a red Chevy Cruze and opened fire. An 81-year-old neighbor of the first victim was shot in the foot. She is expected to recover, Judd said.Blandin took off before deputies got there. As they spoke to the two victims, the first victim realized she knew Blandin. She told deputies Blandin and her ex-boyfriend once attended school together.

Once investigators pieced together where Blandin had taken the victim and whose car he was driving, they rushed to the mobile home where the first victim escaped. When they arrived, there was smoke coming from the residence.

Inside, they found the body of an 80-year-old woman, identified by neighbors to FOX 13 as Peggy Shiering, who was shot in the stomach and in the head. They also found household items stacked on top of the stovetop; an apparent attempt by Blandin to set the mobile home on fire, Judd said.

The man accused of murdering an elderly woman, raping another woman, and shooting another elderly woman in the foot, all in Polk County, Florida, was arrested in Atlanta after an alleged carjacking Saturday.