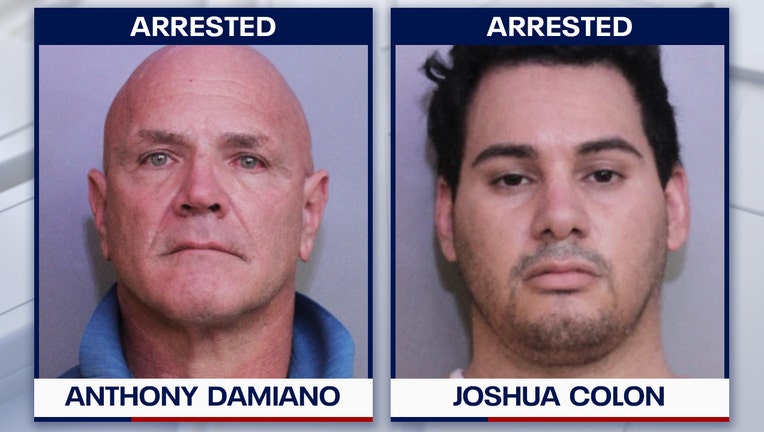 BARTOW, Fla. - A Polk County fire captain has turned himself in to authorities after he was accused of enlisting the help of a paramedic to steal COVID-19 vaccines meant for first responders.

Fire Rescue Captain Anthony Damiano turned himself in at the Polk County Jail Wednesday afternoon. According to the sheriff's office, Damiano blackmailed paramedic Joshua Colon into providing him with three COVID-19 vaccines.

Colon was arrested Monday after investigators said he forged vaccine screening and consent forms to help cover up the theft of three doses of the Moderna vaccine. The paramedic had been assigned to administer the shots to first responders in the county.

Polk Sheriff Grady Judd said Colon received three vials of the vaccine, containing 10 doses each, on Jan. 6 and was directed to administer the shots at a fire station in Davenport.

Colon told deputies that Damiano said he wanted some vaccines for his mother, and advised Colon he could report the vaccines as waste.

The paramedic said when he refused, Damiano told him he would tell his supervisors that Colon was selling vaccines outside of work.

"Colon stated he became frightened due to Captain Damiano's rank in the agency," an arrest affidavit said.

Colon said later that day, Damiano ordered him to go on his lunch break. The paramedic told him the vaccines were left in a refrigerator with a label tab.

When he returned from his break, Colon noticed the tab had been tampered with and three vaccines were missing. The sheriff said Colon did not report the theft to anyone at Polk County Fire Rescue.

When Colon was later asked for documentation on the vaccines, investigators said he forged the forms to cover up the missing doses.

The investigation began when a battalion chief noticed discrepancies in the paperwork Colon filed.

During the investigation, the two firefighters were contacted and told investigators that they had not yet received the vaccine.

While at the lawyer’s office, Colon called the captain and they discussed the vaccine, according to investigators who monitored the call. The captain told Colon that the doses were in a car parked outside a friend’s house in Saint Cloud, officials said.

According to Judd, deputies found two vials there. The third has not been recovered.

"The bottom line is Joshua tried to cover up for the captain," Judd said during a Tuesday press conference. "Joshua set up the circumstance for the vaccine to be stolen. If Joshua had simply gone to his boss right then, he would’ve been a hero. Instead, he began falsifying paperwork, making up people who didn’t exist, just to cover it up."

Damiano had been in California for work. He turned himself in Wednesday afternoon after arriving back in Florida.

"You can run but you can’t hide. You’re going to jail for being a crook," Judd said of the captain. "You’re also going to jail because you abused your authority. We take this sacred trust very seriously. Our firefighters are our heroes. They saved lives. They run in while others are running out. But there is always going to be one who occasionally does something wrong and they will be held accountable."

Damiano faces charges of official misconduct, a felony, and petit theft, a misdemeanor.