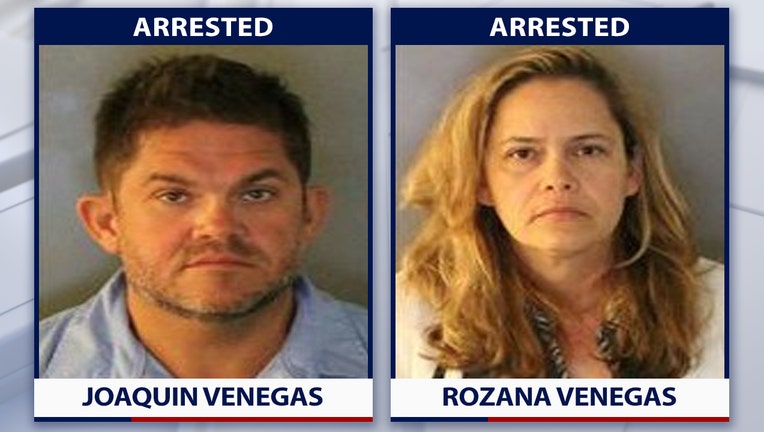 NORTH PORT, Fla. - Rozana and Joaquin Venegas, a married couple from Port Charlotte, have been arrested and charged for attempting to exploit an elderly man they were caring for out of hundreds of thousands of dollars.

According to the city of North Port, an 80-year-old North Port resident was being cared for by the Venegases because most of his family lives on the east coast of Florida. He is extremely hard of hearing which makes it difficult at times to communicate.

In January 2020, the victim was transported to Sarasota Memorial Hospital for treatment of numerous sores on his body due to not being cared for properly, according to the city of North Port. His family had not been notified of this, city officials said.

According to the city, the family spoke with the hospital, and they explained Rozana Venegas had completed an “Enhanced General Durable Power of Attorney” without contacting the victim’s family. On the same day, a large withdrawal was made from his account in the amount of close to $250,000, and put into their bank accounts, officials said.

Upon further investigation, there were additional checks made out to Rozana Venegas for things like hearing aids and upgrading the house, which were never purchased. The couple later admitted the checks were used to help pay off their personal bills, according to city officials.

When the victim was interviewed about this, he stated he didn’t know what his caretakers were trying to say to him, so he just agreed, not knowing they were taking money from him, city officials said.

The North Port Police department wants to know if anyone else has worked with the Venegases for care-taking services. Anyone who recognizes the couple or who has more information is asked to call or email Detective Chris Clark at cclark@northportpd.com or 941-429-7349.

The victim is now getting excellent care and is doing well.

The Venegases are charged with felony exploitation of the elderly for over $100,000, with possible additional charges forthcoming.