The president along with the first lady participated in a drive-in rally in Georgia on Thursday to mark President Biden's 100th day in office.

ATLANTA - President Joe Biden emphasized how important Georgia was in helping push his administration's agenda in his first 100 days in office by spending the day in the state, meeting with former President Jimmy Carter and holding a rally in metro Atlanta.

Biden was fresh off of his primetime address to a special joint session of Congress on Wednesday night that touted his $4 trillion plans to rebuild America’s aging infrastructure and vastly expand the government’s social safety net. It is something the president has called a "once in a generation investment."

"We need to invest in things our families care about and need the most," Biden told hundreds of supporters at Infinite Energy Center in Duluth Thursday evening for a socially distant drive-in car rally.

It’s no accident Biden chose Gwinnett County to serve as the backdrop to begin making his case for his spending plan. The fast-growing Atlanta suburb elected its first Democrat in decades to serve in Congress last year. The president also carried the county in 2020.

SEE ALSO: Biden's first 100 days: A look at what the president has done since taking office

President Joe Biden marked his 100 days in office with a visit to Georgia.

In Georgia, Biden won by fewer than 12,000 votes out of more than 5 million cast. The state, long a Republican stronghold, is now a political battleground that will feature closely watched races for Senate and governor next year. It will almost certainly be one of the most competitive states during the 2024 presidential campaign.

"What did you do with your vote in Georgia? You changed America. All of America wants to thank you," President Biden said. "Because of you, the rest of America was able to get help. If you ever wonder if elections make a difference, just remember what you did here in Georgia."

The president also pointed to Georgia’s twin Senate runoffs which elected two democrats to the chamber for the first time in decades. The president said Sens. Raphael Warnock and Jon Ossoff have been instrumental in passing some of the president’s priorities through Congress. He brought the two politicians on stage following his remarks.

Biden’s victory, along with the loss of the two Senate seats to Democrats, also sparked accusations of voter fraud, which prompted the Georgia Republicans to pass a controversial new voting law. It is something Georgia Governor Brian Kemp has been defending vigorously almost daily on social media and on news programs. President Biden doubled down on previous comments that it discriminates against people of color.

The president’s visit was not without opposition. Members in the crowd began chanting during Biden’s remarks in opposition to for-profit prisons and the current state of immigration. One protester yelling "Abolish ICE" and "Our families are dying." Another shouted "We voted for you too!" The group held up a fluorescent orange banner.

"I agree with you, I’m working on it, man, give me another five days. Folks, you all know what they’re talking about. There should be no private prisons period. Private detention centers. They should not exist. And we’re working to close all of them," Biden said.

Across the street from the rally, protesters held up signs and protested that Biden’s remarks cost Georgia millions of dollars after the MLB decided to move this year’s All-Star Game from Truist Park in response to the state’s new voting law. The protesters blame the president’s remarks as the catalyst to the MLB’s decision. 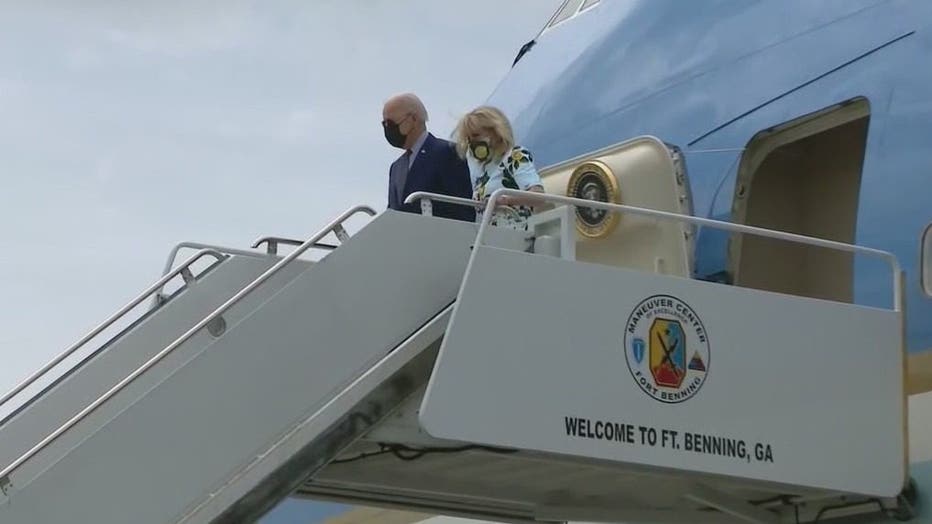 The private meeting on Thursday brought together the oldest sitting president and the longest-lived former president in history. It was their first in-person encounter since Biden took office. The two presidents didn’t appear together outside the Carters’ home. Biden was seen with Rosalynn Carter at the door as he departed. The former first lady stood alongside him supported by her walker.

Many of the 650 residents of Plains turned out to see Biden’s motorcade.

Biden was a first-term Delaware senator in 1976 when he endorsed Carter for the presidency over the party’s Northern establishment players.

Carter didn’t endorse anyone in the 2020 primary that included Biden. But the former president warned Democrats not to veer too far left and risk alienating moderate voters needed to defeat President Donald Trump.

Biden is also scheduled to travel to Pennsylvania and Virginia in the days ahead to promote his spending plan.

The Associated Press contributed to this report. This story is being reported out of Atlanta.