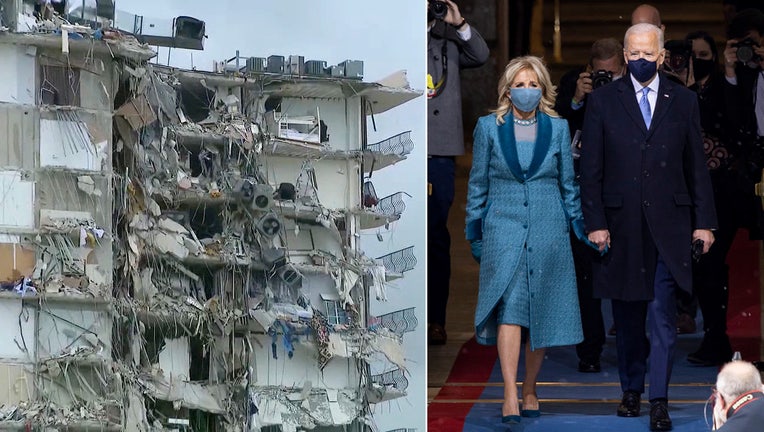 SURFSIDE, Fla. - President Joe Biden and first lady Jill Biden will travel to Surfside on Thursday to visit with the families of victims of the collapsed Miami-area condominium tower, according to the White House.

Additional details, such as their time of arrival, will be announced later.

Biden has offered federal help and extended his concerns to the community as people "grieve their lost loved ones and wait anxiously as search and rescue efforts continue," as he said in one tweet.

The steady work of sifting through the remnants of the collapsed building stretched into a sixth day Tuesday.

Two additional bodies were found Monday, raising the count of confirmed dead to 11. That leaves 150 people still unaccounted for in the community of Surfside. No one has been found alive since hours after the collapse on Thursday.

Officials admit the window of survivability is shrinking. The investigation into what caused the collapse is expected to take several weeks.

As officials start to piece together what exactly occurred, the city of Surfside released a report Monday by an engineer from 2018, which warned of "major structural damage." This includes cracks in the concrete, support columns, and "major design flaw" in the underground parking garage.

Despite the engineer’s warning of major structural problems, a town building official told board members the high-rise condominium was in "very good shape" almost three years before it collapsed, according to minutes of that meeting released Monday.