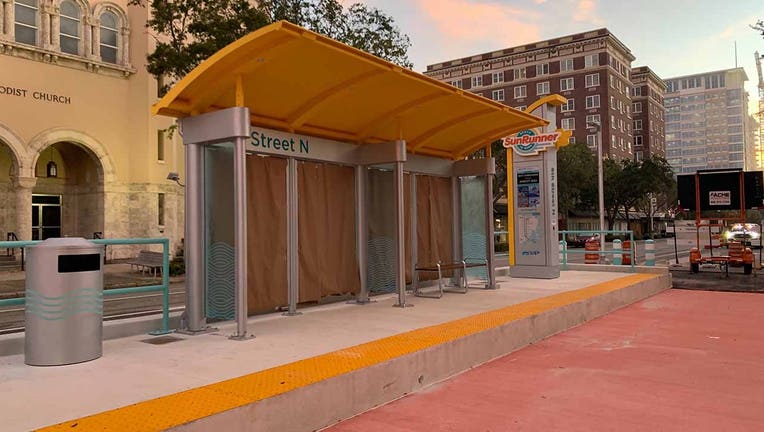 ST. PETERSBURG, Fla. - On Friday, the Pinellas Suncoast Transit Authority unveiled their very first SunRunner station. It will be one of the stops on the new Bus Rapid Transit system, which is set to open next year.

The SunRunner promises to make getting around St. Petersburg easier than ever before by taking the headache out of the travel. The new buses will take passengers from St. Pete beaches to downtown quickly, traveling a total of 10.3 miles in just over 30 minutes.

The bus will have a limited number of stops, but it will get to bypass most of the traffic with lanes that will be mostly exclusive to just the SunRunner buses.

The 40-foot buses will have spots onboard for bikes. Wi-Fi will be available to passengers. However, the big draw will be the ability for tourists and locals alike to get to where they want to go in St Pete, without dealing with the hassle of getting there.

Eventually, TBARTA wants to extend this Bus Rapid Transit to the other side of the bridge, across to new Howard Frankland Bridge to Westshore and downtown Tampa, all the way to the University of South Florida area and finally to Wesley Chapel -- a total of 41 miles to totally connect the region.

They want to get the SunRunner up and running first so that folks will have easy access to both the beaches and downtown St. Pete. While the new station was unveiled on Friday morning, the SunRunner will not officially open until August 2022.