TAMPA, Fla. - A new survey shows a majority of Floridians are in support of it, but organizations are still concerned it may not make the ballot in 2022.

It's been nearly a decade since Colorado and Washington become the first two states to legalize recreational marijuana. Now, it's legal in 18 states, including the District of Columbia and Guam. Many hope the Sunshine State is next.

"This is not a partisan issue. Across the political spectrum there is a majority of support," Suncoast NORML Chapter Executive Director Chris Cano said.

A recent survey by Public Policy Polling, shows 59% of Floridians support legalizing recreational marijuana compared to 31% of people who oppose it.

Despite the majority of support, Cano says getting an initiative on the ballot hasn't been easy.

"Why is there this disconnect between public policy and what people want and it really does boil down to the other forces at work that our representative government have at play," Cano said. 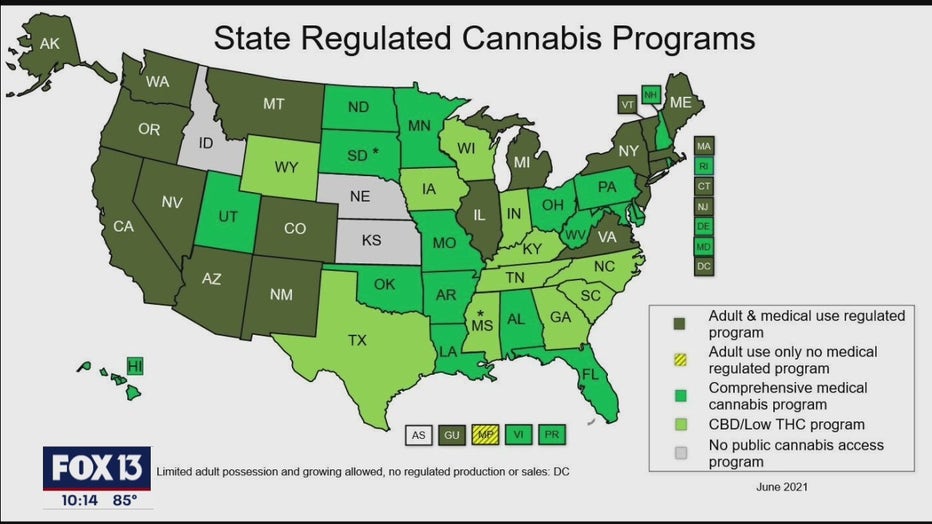 Map of states with some form of regulated marijuana industry

Earlier this year, the Florida Supreme Court struck down two different ballot initiatives that would have left it up to voters to decide in 2022 if recreational marijuana should be legal. Each time, the high court voted 5-to-2, calling both initiatives "misleading."

"Here in Florida we have a supermajority of the GOP representing districts in the Florida House and Senate and those Senators and representatives are severely disconnected," Cano said.

It's why organizations like the National Organization for the Reform of Marijuana Laws or NORML are relying on legalization efforts at the federal level to sway support.

"We are all joining together to release draft legislation to end the federal prohibition on cannabis," U.S. Sen. Chuck Schumer explained.

A new bill set to be introduced by Senator Majority Leader Church Schumer later this year would remove marijuana from the list of federally controlled substances, which would essentially treat marijuana more like alcohol and tobacco.

"That takes away that excuse and the crutch of local and state politicians who say it’s still illegal federally so once that’s out of the way then what’s their excuse to deny their constituency this public policy position, which so many people deem as right," Cano commented.

In an effort to raise money for the cause, the NORML's Suncoast Chapter is hosting a fundraising event called "Suncoast NORML Got Talent". The event is Friday, July 30 at 7 p.m. at the Crowbar in Ybor City.