LONDON (AP) - Queen Elizabeth II missed out on the Remembrance Sunday service in London to pay tribute to Britain's war dead because she sprained her back, Buckingham Palace said Sunday.

The service is one of the most important events on the 95-year-old monarch's calendar, and was meant to be her first public appearance after taking a few weeks off to rest under doctor’s orders.

British media reported that the back sprain was not believed to be related to the recent medical advice to rest that prompted other cancellations.

"The Queen, having sprained her back, has decided this morning with great regret that she will not be able to attend today’s Remembrance Sunday service at the Cenotaph," officials said just hours ahead of the ceremony. "Her Majesty is disappointed that she will miss the service."

The queen spent a night in a London hospital last month after being admitted for medical tests. It was her first such stay in eight years. On Oct. 29, the palace said she had been told by doctors to rest for two weeks and only take on light duties.

She canceled plans to attend the U.N. climate summit in Glasgow, Scotland, but sent a video message. 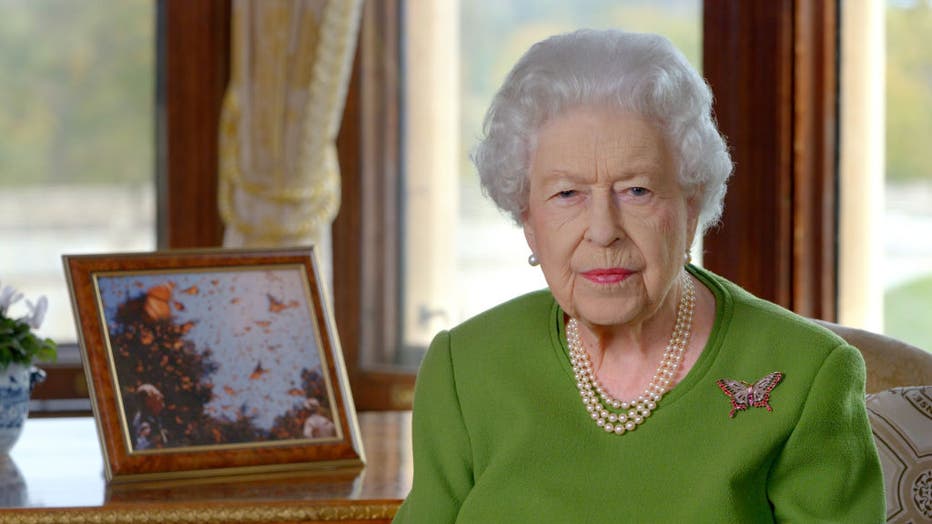 In this undated image provided by Buckingham Palace, Queen Elizabeth II records a video message that was broadcast to attendees during an evening reception to mark the opening day of the COP26 summit at the Scottish Event Campus (SEC) on Nov. 1, 2021

But officials stressed at the time that "it remains the queen's firm intention" to be present for the national Remembrance Sunday service. On Thursday, Buckingham Palace said the monarch planned to watch the ceremony at the Cenotaph war memorial in central London from a balcony, as she has for several years.

The queen served in World War II as an army driver and mechanic, and is head of Britain's armed forces. She attaches great importance to Remembrance Sunday, a solemn ceremony to remember the sacrifices made by fallen servicemen and women. The national service, which follows Armistice Day on Nov. 11, is traditionally marked by the wearing of poppies and a national two-minute silence observed at 11 a.m.

On Sunday, other royals and politicians led the ceremony in London's Whitehall, with hundreds of military personnel and veterans lined up around the Cenotaph memorial. It was the first time the event had returned to normal since the pandemic began.

After Royal Marine buglers sounded the "The Last Post," Prince Charles, 73, laid the first wreath on the queen's behalf, as he has done since 2017. He was followed by other royals and Prime Minister Boris Johnson.

The queen has continued to work from home, doing desk-based duties, during her period of rest. She has spent most of the time at Windsor Castle, west of London, although she made a weekend visit to Sandringham, the royal family’s eastern England estate.

She has missed several other events, including the Festival of Remembrance at the Royal Albert Hall on Saturday. Officials also said she will miss the opening of the Church of England’s governing General Synod on Tuesday.

Penny Junor, a royal biographer, said the queen may be entering a new phase of her reign where she will not be seen as much in public.

"It’s very sad for the queen, because this is the one event in the year that she really, really likes to be at," she said. "We’re so used to seeing her out and about and looking years younger than she is that I think we’ve been lulled into thinking she can go on at this kind of pace forever. Clearly she can’t."

Britain’s longest-lived and longest-reigning monarch, Elizabeth is due to celebrate her Platinum Jubilee — 70 years on the throne — next year.