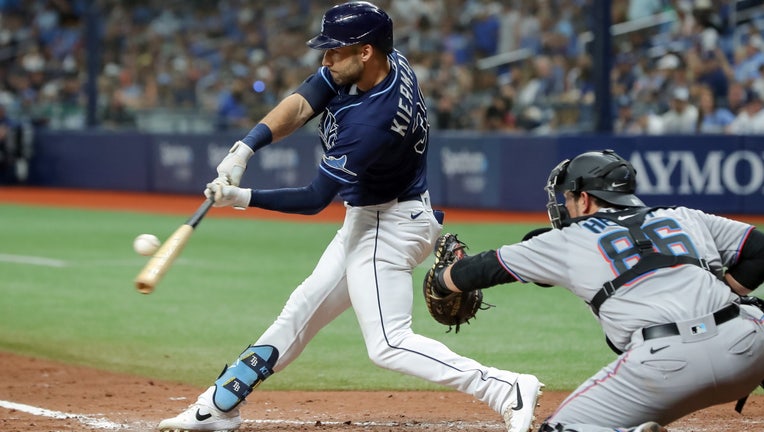 Kevin Kiermaier #39 of the Tampa Bay Rays knocks in two runs with a double in front of Payton Henry #86 of the Miami Marlins in the fourth inning of a baseball game at Tropicana Field on September 24, 2021 in St. Petersburg, Florida. (Photo by Mike C

The defending American League champions got three RBIs apiece from Randy Arozarena and Kevin Kiermaier, who was a homer short of the cycle.

Tampa Bay, which clinched a postseason spot Wednesday, has a magic number of two to win the division. A Rays victory and Boston loss to the New York Yankees on Saturday would secure Tampa Bay's second consecutive AL East crown.

"Our whole group, we know what situation we're in, and we just want to take advantage of that," Kiermaier said. "Try to take that next step in winning the division, and hopefully once we do we just keep going and do not get content. We have to keep that motivation because we just need to keep this competitive fire that we've had and just ride that out as long as possible."

Yarbrough (9-6) replaced opener David Robertson in the second and had four strikeouts. Dietrich Enns went the final two innings to complete a two-hitter.

Robertson worked a scoreless first in his first career start after 670 relief outings. It was the most appearances out of the bullpen at the time of a pitcher’s first major league start, passing Joakim Soria’s 666, according to STATS.

Yarbrough allowed 18 runs over 10 1/3 innings in his previous three starts.

"Picked up a big strikeout when he needed it, and you saw a lot of popups, a lot of miss-hits," Rays manager Kevin Cash said. "It was very encouraging to see him get back in that rhythm."

Tampa Bay rookie shortstop Wander Franco returned after missing two weeks with a right hamstring injury and extended his on-base streak to 40 games with a sixth-inning walk. Only Frank Robinson, with a 43-game run in 1956, has a longer one among players under 21.

Franco doubled in the eighth and went to third on defensive indifference with the Rays ahead 8-0. He spoke with catcher Sandy León, who made his fifth appearance as a reliever, as the pair left the field after the inning.

León gave up one hit in a scoreless inning.

The Marlins dropped to 3-15 in interleague games.

"We've played some good games against the contenders and tonight wasn't one of them," manager Don Mattingly said. "It started from the very beginning."

Miami center fielder Bryan De La Cruz was ejected for arguing after a called third strike on a check-swing appeal in the first inning.

After the Rays loaded the bases against Edward Cabrera (0-3) on two walks and a single with two outs in the first, Arozarena made it 3-0 when he doubled on a full-count pitch.

Cabrera gave up three runs, two hits, four walks and struck out six over three innings. The rookie needed 61 pitches to get four outs before requiring just 15 to get the next five.

Kiermaier had a two-run double in the fourth and Francisco Mejía drove in two with a single in the fifth off Sean Guenther as Tampa Bay went up 7-0.

Kiermaier added a run-scoring triple in the seventh.

"They are a challenge, and it’s actually exciting to play them because of how good they are. They’re fun to play against. Fun and not fun." — Mattingly on the Rays.

Rays catcher Mike Zunino was the winner of the Don Zimmer Award as the team's MVP in voting by the Tampa Bay chapter of the BBWAA. Arozarena was selected as the outstanding rookie and Joey Wendle received the Champion Award for the spirit of professionalism on and off the field.

Marlins: Mattingly said Pablo Lopez (right rotator cuff strain) will rejoin the team after throwing two scoreless innings Thursday night for Triple-A Jacksonville. It hasn’t been determined what the next step will be for the right-hander.