Amalie Arena's emergency backup goalie in the NHL for a day

TAMPA, Fla. - Even if you only get to spend one day in the NHL, you've done more than most.

The Tampa Bay Lightning beat the St. Louis Blues 4-2 on Thursday night, but Kyle Konin will remember more than the score.

Thanks to a series of chance events, Amalie Arena's designated emergency backup goalie got to spend one day as a member of the St. Louis Blues.

"I walk in and my jersey is in the stall," he said during an interview Friday. "The chance of making it to the NHL, even if you get drafted, it's less than one percent."

Every NHL arena has to have an emergency backup goalie in place, just in case both the starter and backup on one of the two teams are unable to play.

Ordinarily, Konin just sits in the stands and watches, with his gear nearby. 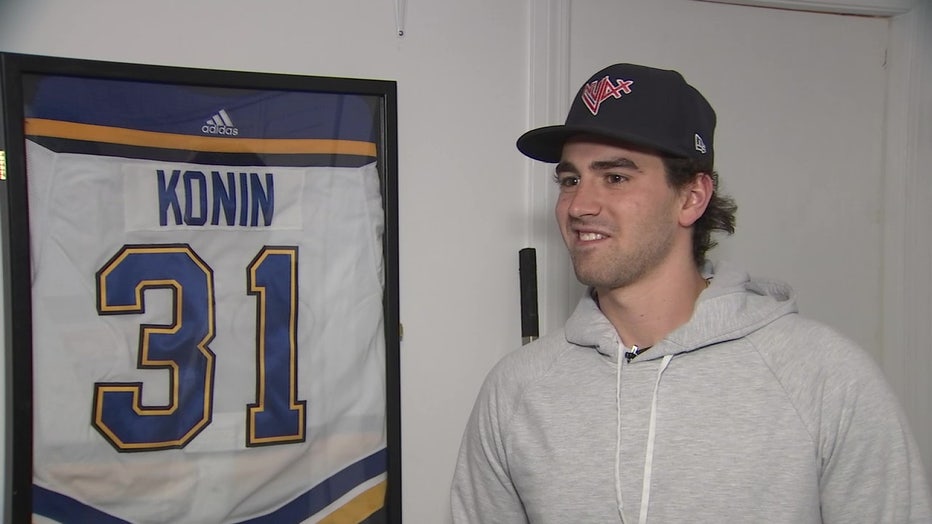 Thursday, it just so happened that one of the Blues' regular goalies was sick, and they didn't have time to call up a minor leaguer, so Konin was needed to sit on the bench in uniform, just in case.

Because it was technically his first game in the NHL, the Blues followed tradition and allowed him to lead the team out of the box, onto the ice.

"My heart rate was through the roof," he said. "It is crazy. It is almost like watching someone else go out there and do it. In my head, I was just doing a normal pace. And I watched the videos after and I went a hundred miles an hour doing a full sprint."

Lightning light the way this holiday in Brandon

A family in Hillsborough County is mixing hockey with the holidays, decking the halls by decking out their house for the Tampa Bay Lightning.

The 23-year-old has played in leagues from which players have been drafted, so he's almost certainly better than anyone you know. As Amalie Arena's emergency backup, he often takes shots during Lightning practices.

But today, he considers himself a "beer-leaguer," which is one way to describe his advanced-level rec-league in Brandon.

"Some guys show up drinking beers, sometimes you have beer in your bottle on the bench, and all the guys go out for beers after the game."

His family made sure to buy tickets in the front row for Thursday's game at Amalie.

"If this is going to happen to anybody, an opportunity like this, and somebody is going to have the most fun with it, it would be Kyle," said his father, Jeff Konin.

Sadly for Kyle, he watched the whole game from the bench, as the Blues goalie lost, but survived. The Blues signed a stick and gave Konin a bunch of swag – and of course, that jersey.

Who cares how you make it to the NHL? Thursday night, it was the visiting team that needed him.

Lightning fans have nothing against Kyle, but probably wouldn't wish for him to be needed, because that would mean both regular goalies, including Andrei Vasilevskiy, would be out.