ST. PETERSBURG, Fla. - The red tide crisis is ruining a lot of people's plans for a day at the beach in Pinellas County but thanks to researchers at the University of South Florida, there's a way to look at the forecast of red tide for the next few days.

Researchers at USF are taking data of how much red tide there is and measuring ocean currents to figure out where the blooms are going and when.

The map may look like a toddler had some fun with a crayon, but the squiggly lines show crucial information about Karenia brevis -- or red tide -- and where it's flowing in the bay and the gulf. 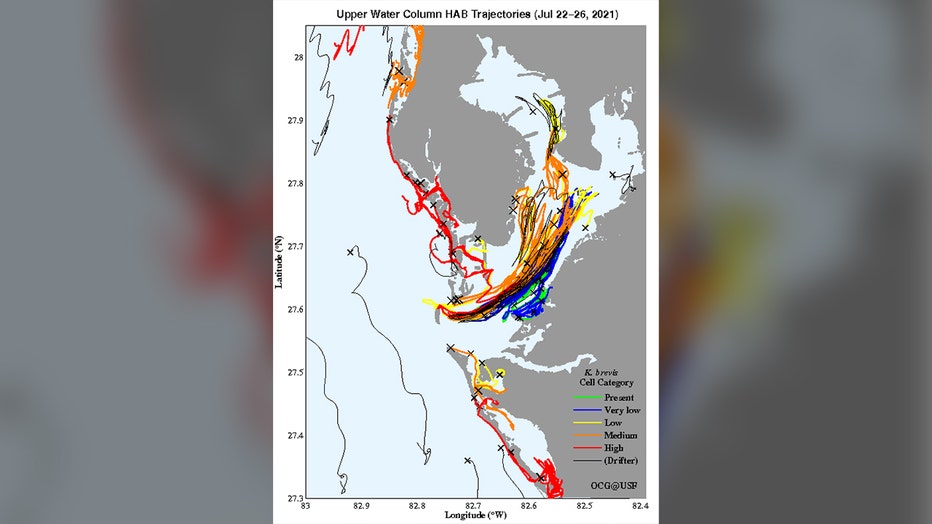 "This provides information for the potential risks of the coastal area where red tide could be affected," said USF oceanography researcher Yonggang Liu.

He's part of a team that puts together the red tide forecast map. He says the lines represent a four-and-a-half-day period of what the red tide concentration is and where the blooms are expected to go.

Scientists say we need to act quickly and update infrastructure across the state to preserve the water.

"Generally, what you're looking for is, where are there no colors, or cool colors on the map, where are those greens or blues. If you're seeing greens and blues in a location on a map then that's probably an area where it's okay to go fish or play," explained Maya Burke with the Tampa Bay Estuary Program.

The red lines on the map represent the highest concentrations of red tide. For currents, the black Xs are starting points and the black line following it shows where the current is moving.

"We combine this information with satellite imagery and wind forecasts and all sorts of different things and we're basically using it to communicate with all of our partners throughout the watershed to stage who needs to be prepared for worsening conditions, who might need to have contractors ready to remove dead fish," Burke said.

Toxic algae blooms are moving out of Tampa Bay towards the 35-mile stretch of Pinellas County beaches.

For this week, there are a lot of red lines in Tampa Bay, moving out into the Gulf of Mexico. That brings some bad news for this weekend for beachgoers.