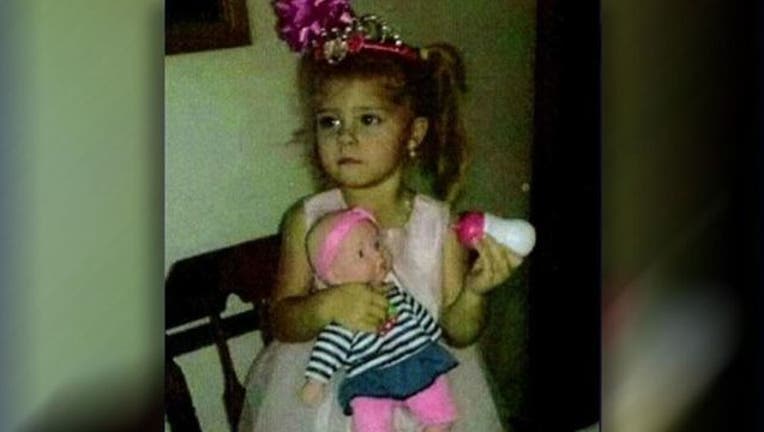 JACKSONVILLE, N.C. (AP) -- The body of a missing 3-year-old North Carolina girl was found in a creek less than a day after her mother's boyfriend was charged with hiding her body after knowing she didn't die of natural causes, authorities said.

Investigators continue to stay tight-lipped about what happened to Mariah Woods. But they left little doubt Earl Kimrey knew how she died and was trying to cover it up. He was charged late Friday with concealing of death.

"It was too late to save Mariah the moment the 911 call came in," FBI agent Stanley Meador said of the call the girl's mother made Monday to report her missing. "The arrest warrants are public record and the records speaks for themselves. We will not discuss any details related to the homicide investigation."

Kimrey removed the girl's body from the place where she died and knew her death was not natural, according to those arrest warrants.

The body was in a creek in Pender County about 25 miles (40 kilometers) from the home Mariah shared with Kimrey in Jacksonville, FBI spokeswoman Shelley Lynch said in a statement with few other details. The medical examiner still needs to identify the body, but investigators are confident it is Mariah, Lynch said.

Miller refused to release other details at a news conference.

Mariah's mother said she last saw her daughter when she put her to bed Sunday night.

Kristy Woods made tearful pleas for her daughter's return. "This is my world, this is my angel," she said.

Kimrey, 32, is also charged with obstruction of justice, second-degree burglary, felony larceny and possession of stolen property. Prosecutors are reviewing whether additional charges should be filed.

The statement did not indicate whether Kimrey had a lawyer or if anyone else could also be charged.

Mariah's father, who has been involved in a custody dispute with her mother, has criticized her version of events.

"Someone just walked right up in there, grabbed the 3-year-old out of the bed and she didn't cry, she didn't scream?" Woods told WCTI-TV in New Bern earlier in the week. "Nobody heard anything? Four people in the house, two adults and two kids someone just comes up and snatches the baby and walks out?"