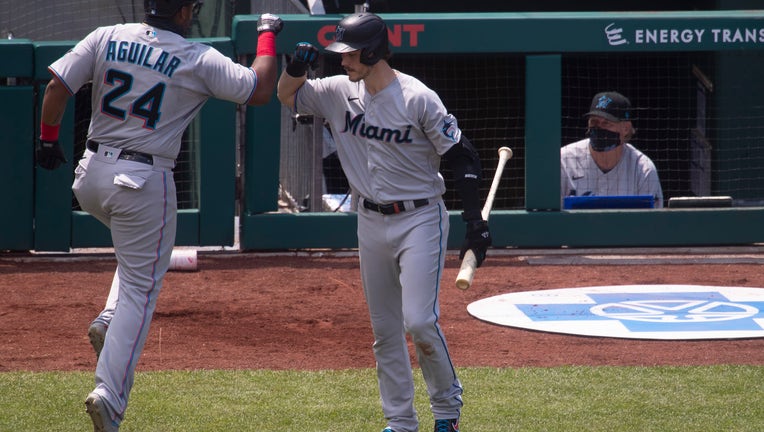 PHILADELPHIA, PA - JULY 26: Jesus Aguilar #24 of the Miami Marlins celebrates with Brian Anderson #15 after hitting a solo home run in the top of the second inning at Citizens Bank Park on July 26, 2020 in Philadelphia, Pennsylvania. The 2020 season

USA Today reports the team's season has been put on hold as a result, though the MLB announced Tuesday that only the team's games through Sunday have been postponed.

"Given the current circumstances, MLB believes that it is most prudent to allow the Marlins time to focus on providing care for their players," a league statement said.

The Marlins received positive test results for four additional players Tuesday, a person familiar with the situation told The Associated Press. The person declined to be identified because the results had not been publicly released.

The Marlins underwent another round of tests Tuesday morning. Their outbreak raised anew questions about MLB's attempts to conduct a season outside of bubble environment, which the NFL also has opted not to create for its season.

“This could put it in danger,” Fauci, the nation’s top infectious disease expert, said of the outbreak. "I don’t believe they need to stop, but we just need to follow this and see what happens with other teams on a day-by-day basis.”

Fauci made his comments on ABC's “Good Morning America” before the news of the Marlins' latest test results.

“Major League Baseball — the players, the owners, the managers — have put a lot of effort into getting together and putting protocols that we feel would work,” Fauci said. “It’s very unfortunate what happened with the Miami (Marlins).”

Their outbreak continued to disrupt Major League Baseball’s schedule Tuesday, the sixth day of the pandemic-delayed season. Postponed for the second consecutive day were the Marlins' home game against Baltimore, as well as the New York Yankees' game at Philadelphia.

Miami played at Philadelphia last weekend. The Yankees had been scheduled to host the Phillies on Wednesday and Thursday, but MLB postponed those games as well.

The Philadelphia Department of Public Health said it was working with the Marlins and Phillies on contact tracing to contain the spread of the virus. No Phillies have tested positive.

“Obviously, we don’t want any player to get exposed. It’s not a positive thing,” Commissioner Rob Manfred said Monday night on the MLB Network. “But I don’t see it as a nightmare. ... We think we can keep people safe and continue to play.”

The Orioles, who made a trip to Miami without playing a game, are scheduled to host the Marlins in a two-game series starting Wednesday.

Meanwhile, Chicago White Sox manager Rick Renteria remained at the team hotel in Cleveland on Tuesday and has not been medically cleared after experiencing some COVID-19 symptoms. He woke up Monday with a slight cough and nasal congestion.

Manfred said there are factors that would force MLB to alter plans.

“A team losing a number of players that rendered it completely non-competitive would be an issue that we would have to address and have to think about making a change,” he said. “Whether that was shutting down a part of the season, the whole season, that depends on the circumstances. Same thing with respect to league-wide. You get to a certain point league-wide where it does become a health threat, and we certainly would shut down at that point.”

MLB and the union held talks Monday after aspects of the protocols were widely ignored during the season’s first four days, such as the prohibitions on high-fives and other physical celebrations.

The NBA and NHL plan to resume their seasons in bubble environments, with basketball at Lake Buena Vista, Florida, and hockey at Edmonton, Alberta, and Toronto.

“The NBA and the NHL have an advantage: smaller numbers of players, shorter period of time,” Manfred said. “I understand why they did what they did. I’m just not sure it was workable for us.”

The NFL has opted not to create a bubble environment as training camps open this week.

“It might be that they have to go in a bubble,” Fauci said, "but I think they’re conscientious enough and want to protect their players and protect the personnel that they will do the right thing.”