TAMPA, Fla. - Plans to add lanes to the Selmon Expressway are in the works but first, the Tampa Hillsborough Expressway Authority (THEA) wants to hear feedback from residents in a public meeting Thursday.

THEA started a South Selmon Project Development and Environment study in 2019 to look at where and how to add lanes on the toll road. The project would run about 4.5 miles from Himes Avenue to Whiting Street downtown.

The Palma Ceia playground and dog park falls within the study area in South Tampa since the park and surrounding neighborhood back up to the Selmon Expressway.

"I can’t hear as much traffic in our house but I know people who live a lot closer definitely would hear the noise," said Katie Walton, who lives in the neighborhood.

A noise barrier wall is part of the plan. THEA director of communications Sue Chrzan said the agency has committed $10 million to add barrier walls, extending from Himes Avenue to Willow Avenue, to reduce noise for the nearby homes. 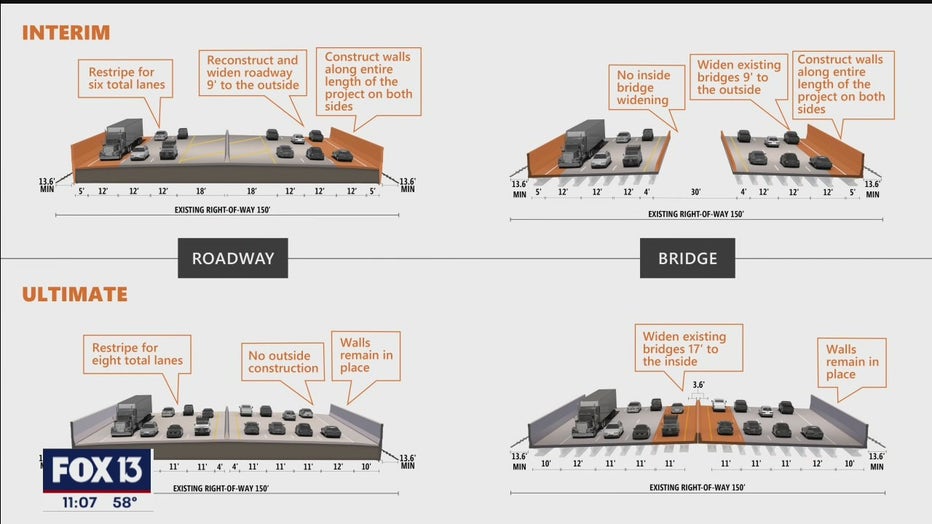 Residents said they like having the opportunity to see the plans and comment at the agency's open house, which is scheduled for Thursday, February 24 from 5 p.m. to 7 p.m. at the Tampa Convention Center.

"I think it’s really important because we actually live in this area, and we would be the first ones impacted by it," said Walton.

Chrzan said the favored construction plan would expand the expressway with two lanes, to start, building the walls and lanes on the outside, and then working their way in.

"You’re planning for eight lanes. You’re only going to do six at the moment. You’re going to put noise walls in. And then in 10 years or so when we need to, we’ll come back and we’ll fill in the middle to make those eight lanes," said Chrzan.

The goal is to cut down on neighborhood traffic as Tampa grows.

"We’re expecting, in the next 10 years or so, 700,000 more residents," she said, adding that the work would be done within the expressway’s right of way. "So this is the last real major construction project that we’ll be able to do to add lanes to that area because we are so constrained."

After the public hearing, planners will present the option they best is best to the THEA board of directors. If it’s approved, Chrzan said construction would likely start in 2023, using revenue from the tolls as well as bonds to pay for the work.