Tips for flying during the coronavirus pandemic

New restrictions accompanied the final weeks of summer break in Europe. Hours-long traffic jams formed at the Croatia-Slovenia border over the weekend as Austrians trying to beat a midnight quarantine deadline rushed home from a favored coastal vacation spot.

With one goal in mind, the Italian government closed discos, required masks from 6 p.m. to 6 a.m. anywhere people might gather and began testing all arriving travelers from Spain, Greece, Malta and Croatia.

“Our priority must be the reopening of schools in September in full safety,” Italian Health Minister Roberto Speranza said. Italy's schools have been closed nationwide since early March.

Several nursing homes around France closed their doors anew after reporting virus cases in recent days, families told The Associated Press. One nursing home in eastern France had 34 of its 135 residents and staff members test positive since Aug. 3, and nine residents with the virus die in the past week.

The local mayor in the town of Polnoy blamed the outbreak on waning vigilance by families amid the vacation season, and a sense among many in France this summer that the crisis was over.

France's two largest cities, Paris and Marseille, widened the areas where masks are required, and the French government sent riot police to the Marseille region to enforce the requirement.

The country's labor minister is planning negotiations for Tuesday on making masks mandatory in all workplaces and other employee safety measures. French government studies indicated that at least a quarter of new virus clusters that emerged from May 9 to Aug. 11 were linked to workplaces. 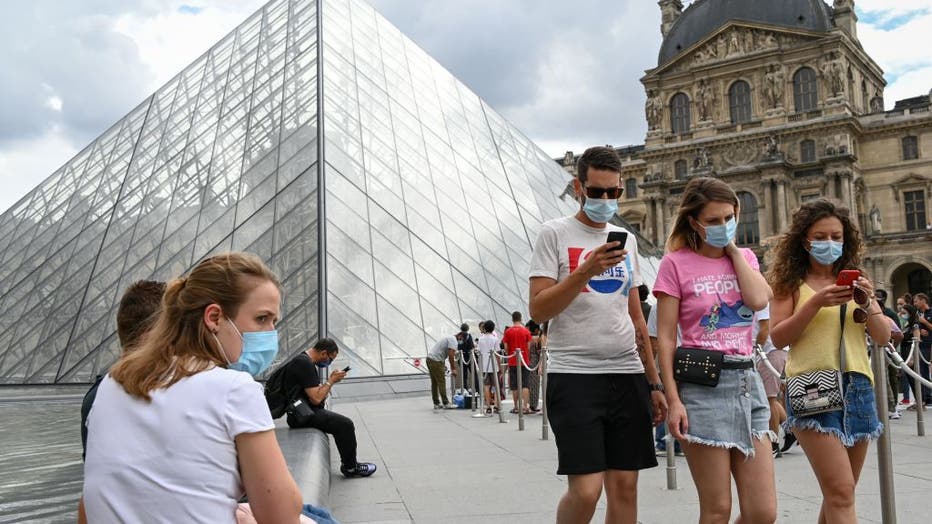 “We need a culture of masks, a culture of protective measures. We failed to deliver this clear message in the first wave,” Dr. Giles Pialoux, the head of infectious diseases at Tenon Hospital in Paris, told France Inter radio on Monday. “We need strong and coherent messages. I think the strategy of fear does not work.”

In Greece, health officials attributed many new infections to wedding receptions and people ignoring social distancing and other public health protective measures while on vacation. Authorities began carrying out spot checks on ferry passengers returning to the mainland from the Greek islands amid growing concern of vacationers transporting the virus back to cities.

Three young Greeks reportedly broke quarantine on Sunday night while waiting for their virus test results on the island of Patmos and boarded a ferry to the port of Piraeus outside of Athens. Two of the three tested positive, and all three were detained.

Despite the rise in cases, officials say schools will reopen as planned in Greece on Sept. 7.

Schools in northern regions of the Netherlands are reopening this week with most pupils expected back in classrooms by Wednesday without social distancing or face masks. Students returning from vacations in high-risk areas must quarantine at home for 14 days.

Education Minister Arie Slob insisted it is safe to return to high schools but told NOS Radio 1 news that “there is never a 100% guarantee that everything will go well.”

RELATED: How risky is flying during the coronavirus pandemic?

In the far grimmer case of Lebanon, reported coronavirus cases have surged after the devastating blast at the Beirut port earlier this month, prompting medical officials Monday to call for a two-week lockdown. The blast overwhelmed the city’s hospitals and badly damaged two playing a key role in treating COVID-19 patients.

A new outbreak in New Zealand's largest city, Auckland, prompted Prime Minister Jacinda Ardern to delay the country's national election by four weeks. She said it would be the only postponement in the vote.

In South Korea, a conservative pastor who has been a bitter critic of the country’s president tested positive for the coronavirus, health authorities said Monday, two days after he participated in an anti-government protest in Seoul that drew thousands.

More than 300 virus cases have been linked to the Rev. Jun Kwang-hun’s huge church in northern Seoul, which has emerged as a major cluster of infections amid growing fears of a massive outbreak in the greater capital region.

The resurgence of the virus in the Seoul region was a rude awakening for a country that had been eager to tout its gains against the virus.

In South Africa, which is five months into one of the world's longest and strictest lockdowns, those restrictions finally were bringing signs of progress.

With the number of new cases declining and other indicators showing that South Africa has passed its first peak, the country on Tuesday will resume sales of liquor and cigarettes, and allow bars, restaurants, gyms, places of worship and other venues to reopen, all with distancing requirements. Schools are set to reopen gradually beginning next week.

“Many restrictions on social and economic activity have been lifted. With this comes increased risk of transmission,” President Cyril Ramaphosa wrote Monday in his weekly missive to the nation. “We now need to manage this risk and ensure the gains we have made thus far in containing the pandemic’s spread are not reversed. The greatest threat to the health of nation right now is complacency."

South Africa has reported a total of 587,345 confirmed cases as of Monday accounting for more than half of the 1.1 million cases throughout Africa.