TAMPA, Fla. - The Kansas City Chiefs are on top of the world right now, celebrating their first Super Bowl victory in 50 years. Among the players in the flurry of confetti is a familiar face and an athlete whose career kicked off right here in Tampa Bay.

To the rest of the world, he's larger than life, a Super Bowl Champion. To his Robinson High School coaches and teammates, Byron Pringle is a Knight who fulfilled his destiny.

"He's been so humble and he's been so thankful to everybody," said Robinson High School Football Coach, Craig Everhart."We all knew," said former Knights teammate, Ryan Woehlert. "Coaches knew, everybody knew. We were all pushing for it."

If there was ever play to symbolize this athlete's life's journey, it's highlight video of his 2011 kick return at a game between Robinson and Jefferson High Schools. In the play, Pringle gets the ball, takes a few hits, changes direction, stumbles but doesn't fall. And once he gets his footing and a clear opening, he takes off running and doesn't look back. He hasn't stopped running since then.

"He did a whole bunch of moves," recalled his nephew, Deangelo Davis, a senior at Robinson High School. "I don't know how he did it, like a magician or something."

Before he was No.13 for the Kansas City Chiefs, Pringle was No.1 for the Knights.

"He's an animal. He was getting after it, definitely a team leader on the field off and on," Woehlert said. "But in the weight room, he was so fast, so strong."

"He's so humble," Everhart said. "It was little things like on game days I would bring my receivers little sausage biscuits and his mind was blown and thankful for that."

Though personal battles kept him off the field during his sophomore and junior years, Pringle came back for his senior year, ready to play.

"He grew in his senior year especially. It clicked," Everhart said. "I was Byron's position coach and I'll never forget, when Byron showed up for his senior year, they were all kind of joking with me that all of a sudden, I would become the best receiver coach in Tampa Bay just because he was there."

Pringle put in a few years at Butler Community College, transferred to Kansas State, signed with the Chiefs in 2018, and in 2020, at age 26, he'd be wearing a Super Bowl ring.

"It's really crazy because one of our family members really made it to the Super Bowl," Davis said. "Not only he won, but he's bringing the ring back to the city."

Pringle hasn't forgotten where he started.

"I think the 'it' factor was the work ethic," Everhart said. "You see that today, he comes back to town, he is working out with our receivers, he comes out to the weight room."

"He still trains me now," Davis said. "He's been trying to get me to follow his footsteps. He taught me to never give up and never be scared."

For his nephew and all the others who play on that same turf at Robinson, Byron Pringle is proof that it can be done.

"It sends a strong message," Everhart said, "making sure they know it's possible in whatever they do, not just football. Coming from a small Robinson High School in Tampa, you have the opportunity to go as high as you want."

Pringle isn't the only Bay Area athlete who earned a Super Bowl ring Sunday night. Center Austin Reiter, No.62 for the Chiefs, graduated from Lakewood Ranch High School in 2010 and went on to play for the USF Bulls. 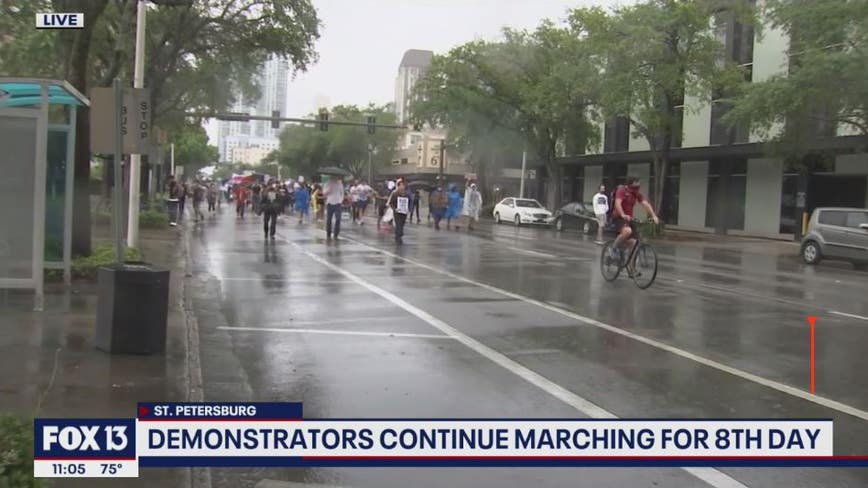