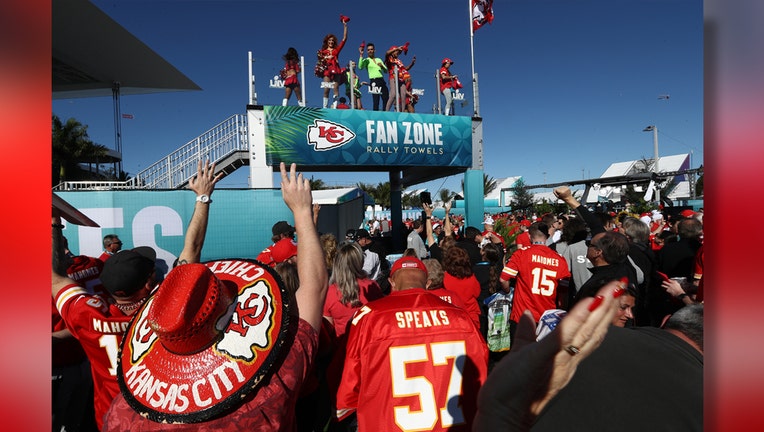 MIAMI, Fla. - It was five years ago that the Royals brought home a championship to Kansas City, and now the players who were part of the 2015 World Series team are pulling for the Chiefs to deliver another parade.

“I’m getting goosebumps just thinking about it,” longtime outfielder Alex Gordon said. “It's like looking in a mirror from 2014 and 2015, the way they've gone about the playoffs, the way they compete together on the field, having fun, coming from behind in almost every game. It just reminds me what we went through.”

Left-hander Danny Duffy grew up a fan of the Broncos, one of the Chiefs' bitter enemies. His uncles like them so Duffy just joined the crowd. But he's gotten to know some of the Chiefs players and he'll be rooting for them Sunday night.

“They carry the same passion we have for this city. It’s not really something you can articulate,” Duffy said. “If they win it’s going to be really cool to have a different view of how the parade is going to be. I barely got to soak in the parade. It was like, ‘Holy crud!' Did I just say, ‘Crud’? It would be cool. I think they’re going to win, and I’ll be excited for the parade.”
___
Gameday has arrived, and the caravans carrying the San Francisco 49ers and Kansas City Chiefs have pulled into Hard Rock Stadium.

Weather for the NFL’s biggest game is expected to be perfect. There is a cloudless blue sky in Miami Gardens, Florida. Forecasters say it’ll be around 61 degrees at kickoff, cooling into the upper 50s as the night goes along.

That’s a few degrees below normal for Miami this time of year. But those conditions almost mirror what the weather was 10 years ago when the game was last played at the Miami Dolphins’ home field.
___
More AP NFL: https://apnews.com/NFL and https://twitter.com/AP_NFL