The Sarasota Police Department released aerial footage of an arrest for which an officer has been placed on administrative leave pending an internal investigation.

SARASOTA, Fla. - The Sarasota Police Department has placed an officer on administrative leave and is currently conducting an internal investigation into a recently surfaced video of an arrest of an African American man. In it, a white officer uses the same type of restraint tactic that led to the death of George Floyd in Minneapolis last week.

The incident occurred on May 18, a week before Floyd died, but was posted to Facebook on Monday. The user who posted the video claims to be the mother of the man being arrested, 27-year-old Patrick Carroll. The man who recorded the video appears to be a cousin.

In the video, Carroll is seen lying on the ground in handcuffs while two white officers restrain him. A female officer holds his arm while a male officer squats over Carroll with a knee on his neck. A third officer stands by next to them.

After about 1:45 into the video, the officer readjusts to move his knee from the man’s neck to the man’s back.

Sarasota officer on leave for kneeling on suspect

Carroll was arrested after being accused of domestic battery. Responding officers say the victim had visible injuries to her face, arms and chest.

According to his arrest report, Carroll was initially cooperative with officers, but that changed when officers told him he was under arrest.

"After being placed in handcuffs, defendant attempted to pull away from officers and refused to get into the rear of the patrol vehicle. Minor force was used to escort subject to the ground and secure him long enough to calm down,” the report states. 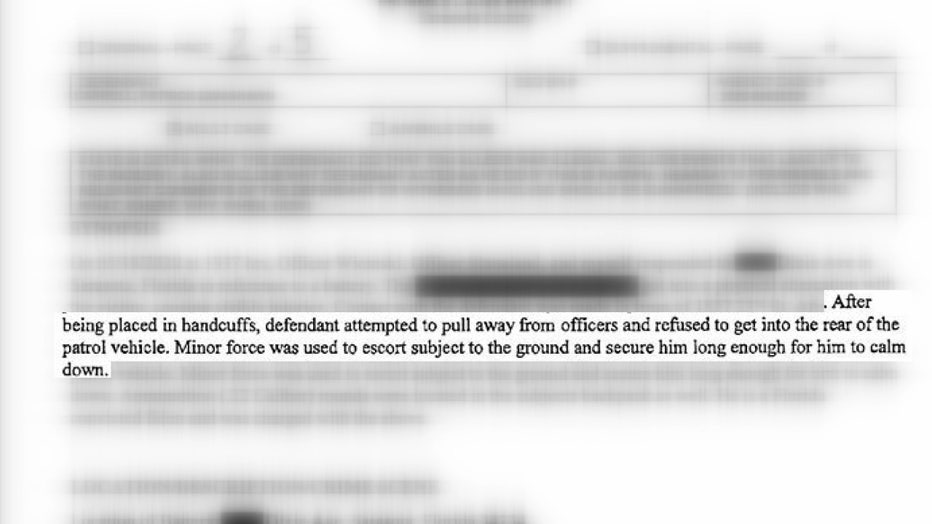 Elsewhere in the affidavit officers describe their use of force as “minimal.”

After seeing video of the arrest however, Sarasota Police Chief Bernadette DiPino seemed to disagree with the officer’s assessment that minor or minimal force had been used.

In a statement released by the department, SPD said, “Chief DiPino was disturbed to see an Officer kneeling on the head and neck of an individual in the video. While it appears the Officer eventually moves his leg to the individual’s back, this tactic is not taught, used or advocated by our agency.”

Sarasota police say Carrol was not injured, nor did he complain of injuries during or after the arrest.

While searching a backpack Carroll was carrying, officers say they found .22-caliber bullets inside, which, according to the affidavit, is a felony-level offense because Carroll is a convicted felon.

Officers also state they found a small amount of marijuana in Carroll’s pocket as well.

Carroll has been charged with domestic battery, possession of ammunition by a convicted felon and resisting arrest without violence.