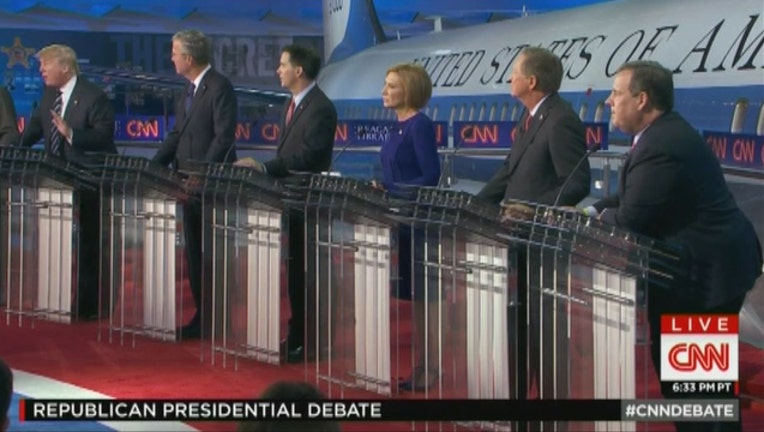 Overview of stage at the second GOP Debate (CNN)

SIMI VALLEY, California (AP) - Here's a look at how the eleven Republican candidates for president participating in the main-event debate at the Ronald Reagan Presidential Library in Southern California fared on Wednesday night.

The clear target of many of his rivals. Also challenged by the debate's moderators to demonstrate proficiency on foreign policy and national security. Challenged by Carly Fiorina for his recent comments about her appearance, and by former Florida Gov. Jeb Bush for attributing Bush's support for an immigration overhaul to his wife's Mexican heritage.

Tried unsuccessfully to elicit apology from Trump for comments about his wife. Came on strong toward the end. Won one of the few big applause moments, when he countered a criticism from Trump of his brother, former President George W. Bush, with the line: "He kept us safe."

Critical of Trump's business dealings, but got ensnared in a comparison of professional records. In her first prime-time debate, Fiorina stood out, vocally asserting her ideas on foreign policy. Memorably said "women all over this country heard very clearly what Mr. Trump said," responding to a question about Trump's critique of Fiorina's experience.

Was among several candidates who went after Trump early in the debate, attacking him for projects that went into bankruptcy. The attack fell flat amid the vocal back-and-forth between the two. Walker was quiet during much of the second half of the debate, and echoed Marco Rubio during an opportunity to distinguish himself late on climate change.

Largely stayed out of the fray with Trump. Demonstrated fluency on foreign and economic policy. Continued to season his comments with his family history as the son of a Cuban immigrant.

Hewed close to his social conservative base, stayed away from Trump attacks, but also went 45 minutes without being asked a question. Insisted he would require Supreme Court nominees be abortion opponents, and defended the Kentucky county clerk who refused to grant marriage licenses to gay couples.

Cruz held close to his tea party base by promising to "rip to shreds this catastrophic Iranian nuclear deal," railing against federal funding for Planned Parenthood and calling his decision to vote to confirm Supreme Court Chief Justice John Roberts a mistake in light of his decisions that upheld the 2010 federal health care law.

The popular retired neurosurgeon notably questioned Trump's assertion that childhood vaccinations were a contributor to autism. He, too, was challenged by moderators to demonstrate foreign policy fluency, but was also notably left out of the questioning about the trustworthiness of Russian Prime Minister Vladimir Putin.

Standing at far stage right, Paul had the best line of the night on the Iraq war and the fight against the Islamic State. "If you want boots on the ground, and you want them to be our sons and daughters, you got 14 other choices. There will always be a Bush or Clinton for you, if you want to go back to war in Iraq."

Like Rubio, tried to steer clear of Trump attacks. Promoted compassion for drug offenders, recommended Mother Teresa be enshrined on U.S. currency and touted and projected a cheerfulness "where everybody's actions make a huge difference in changing the world."

Kept his focus on middle class voters, memorably criticizing Fiorina and Trump arguing over the business resumes, saying struggling Americans "could care less." Projected a law-and-order image: the former prosecutor opposed legalizing marijuana when some called it a state issue.