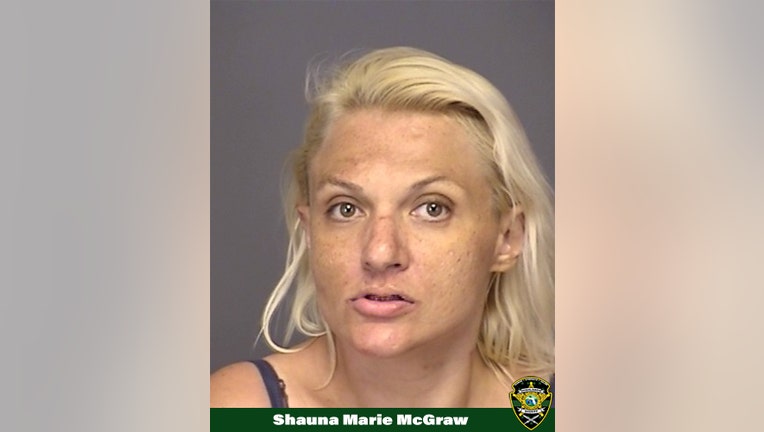 SEBRING, Fla. - When a mother walked into a Subway leaving her two children inside her parked vehicle, a Sebring woman took the chance to steal it, driving away with the kids still in the vehicle, deputies said.

The car was stolen Monday around 7:30 p.m., according to the Highlands County Sheriff’s Office. Investigators said the mother of the children  – a 2-year-old boy and 6-month-old boy -- parked the vehicle in front of a Subway, located at 6225 U.S. Highway 27 North in Sebring.

They said she parked where she could see the vehicle, entered the restaurant and left the vehicle running. Investigators said she kept looking at the vehicle through a window.

However, deputies said the mother didn’t see 36-year-old Shauna Marie McGraw enter the vehicle, but the mother did see her drive away with it, "which is when the 911 call was made."

The vehicle was found abandoned behind Captain Hawk Designs, less than a mile north of the Subway. The children were found safe inside the vehicle.

As deputies began searching for McGraw, a former Highlands County Sheriff’s Office employee named Nakeem Brown – who is now a loss prevention officer for Walmart – saw McGraw running along U.S. 27 and followed her until deputies arrived, according to the agency.

"I want to thank Nakeem Brown for his assistance," Sheriff Paul Blackman said in a statement. "Not only did he call us when he saw the suspect, he went above and beyond and followed her, leading deputies to her location. The deputies of Charlie Squad did a great job of responding to this and resolving it so quickly, and I am very proud of the work they did.

Highlands County deputies said McGraw was aware the children were inside the vehicle when she drove away. According to investigators, she told them she had an argument with her fiancé while at a Shell gas station, next door to the Subway, and wanted to "get away."

"This incident shows why you should always lock your car when you are not in it," Sheriff Blackman said. "This could have turned out much, much worse. While we could charge the mother of the children for leaving them in the car unattended, I think it’s safe to say she learned a valuable lesson from this and will never do that again."