TALLAHASSEE, Fla. - The Seminole Tribe on Monday quietly launched online sports betting in Florida, amid continuing legal challenges to a gambling deal approved by state lawmakers in May.

The tribe’s highly anticipated rollout of sports betting in the state came with no fanfare, and a spokesman declined to comment when asked about the launch.

But social media erupted Monday afternoon after the Seminoles’ Hard Rock Sportsbook allowed players in Florida to download an app enabling them to make deposits and place wagers on professional football, hockey and soccer games and make bets on other sports.

Gov. Ron DeSantis this spring opened the door to sports betting in Florida --- viewed as one of the nation’s most-fertile grounds for digital wagering --- through a deal signed with tribe Chairman Marcelus Osceola Jr. The Legislature signed off on the agreement, known as a compact, in a May special session, but the deal is being challenged in federal court. 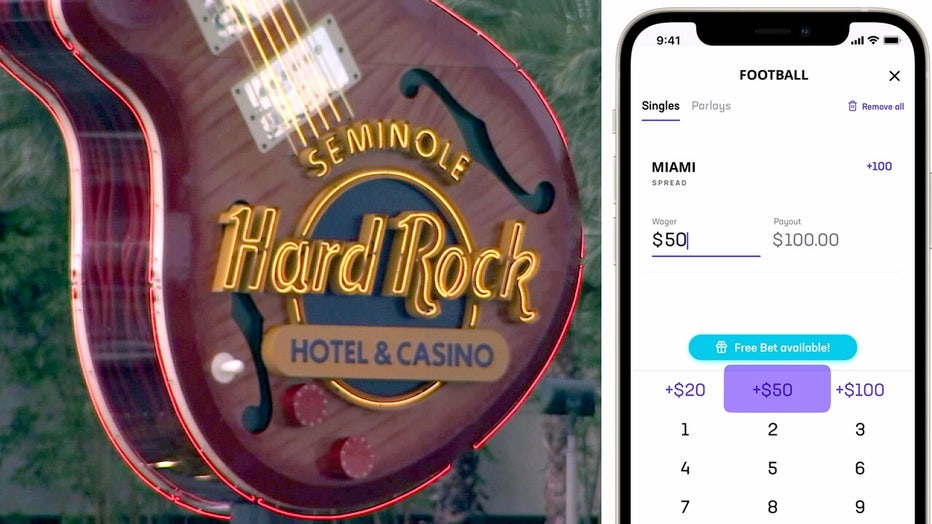 The "hub-and-spoke" sports-betting plan in the compact allows gamblers throughout the state to place bets online, with the bets run through computer servers on tribal property. The compact says bets made anywhere in Florida "using a mobile app or other electronic device, shall be deemed to be exclusively conducted by the tribe." The tribe is ultimately expected to pay billions of dollars to the state because of sports betting and other benefits in the compact, such as being able to offer craps and roulette at tribal casinos.

Part of the deal also requires the tribe to enter agreements to market sports betting with pari-mutuels that will receive a 60 percent cut of profits generated by the marketing. The tribe announced Thursday that it has contracted with the Palm Beach Kennel Club; Hialeah Park Casino; Ocala Gainesville Poker and Ocala Breeders’ Sales Co.; Tampa Bay Downs; and TGT Poker & Racebook in Tampa to partner in the digital sports wagering.

The terms of the deal call for the Seminoles to pay at least $2.5 billion to the state over the first five years of the 30-year agreement.

The tribe said Thursday the state received a first payment of $37 million in October. DeSantis issued a statement describing the compact as "historic."

"Not only will this compact bring a guaranteed $2.5 billion in revenue over the next five years, but it also brings together Florida pari-mutuel businesses from across the state in a creative partnership with the Seminole Tribe providing increased access to safe and transparent sports betting in Florida," DeSantis said.

The tribe’s digital sportsbook went live just days before a federal judge is slated to hear arguments in a case filed by Florida pari-mutuel owners challenging parts of the compact.

Owners of Magic City Casino in Miami-Dade County and Bonita Springs Poker Room in Southwest Florida contend in the lawsuit, filed against the U.S. Department of the Interior and Secretary Deb Haaland, that the sports-betting plan violates federal laws and will cause a "significant and potentially devastating" impact on their businesses. The Department of the Interior oversees Indian gambling issues and allowed the compact to move forward.

The Havenick family, which has owned the Miami-Dade and Southwest Florida facilities for more than five decades, filed a similar lawsuit in July against the state in federal court in Tallahassee, but a judge dismissed the Florida case last month.

Meanwhile, digital wagering platforms DraftKings and FanDuel each have contributed $10 million to a political committee backing a proposed constitutional amendment in Florida that would legalize sports betting at professional sports arenas, pari-mutuel facilities and statewide via online platforms. The proposal would go on the November 2022 ballot if the committee can collect enough signatures and get Florida Supreme Court approval of the wording.