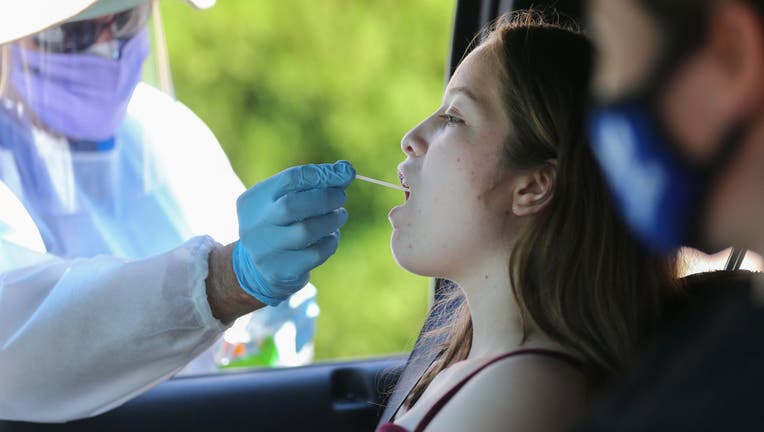 LOS ANGELES - As increasing evidence emerges that the novel coronavirus is unlike most respiratory illnesses, varying degrees of symptoms are appearing in patients, ranging from mild to severe — with some lasting months — in both adults and children.

The children continued to show a variety of disconcerting symptoms for up to 18 weeks after their initial signs of contracting the virus, including fatigue, nausea, persistent bouts of coughing and others.

CTV News reported that at the time, the family was not eligible for a coronavirus test, but doctors told them that based on their symptoms, they believed it was COVID-19.

RELATED: Companies test antibody drugs to help treat and prevent coronavirus ahead of a vaccine

In the U.K., a 14-year-old girl had fallen ill with a cough in March when the pandemic first hit Britain. Indiana Evans was never hospitalized because her symptoms were extremely mild, but doctors eventually diagnosed her with post-viral fatigue post-COVID, Indiana’s mother told CNN.

The young girl currently struggles with persistent fatigue, making it difficult to complete everyday tasks, according to an interview with the news outlet.

The experiences of the children are examples of a growing population of people who are reporting symptoms related to the coronavirus that seem to last for months, calling themselves “long haul survivors.”

Here are the symptoms of COVID-19

Some of the most common symptoms are fever, a dry cough, shortness of breath and fatigue. But as the virus continues its rapid spread, additional symptoms are being identified.

Amy Watson, a preschool teacher who lives in Portland, Oregon experienced a persistent fever for several months when she fell ill with flu-like symptoms in mid-March.

She wasn’t able to get a coronavirus test until April. She tested positive, and then subsequently tested negative three times, but her symptoms stuck around.

Dr. Mady Hornig, an immunologist and professor of epidemiology at Columbia University who is currently researching the long-term effects of viral infections like COVID-19, has been confronted with an array of concerning symptoms that have persisted in patients.

Hornig has been researching one particular illness that has previously been linked to other coronaviruses like SARS and MERS — myalgic encephalomyelitis/chronic fatigue syndrome.

According to the CDC, coronaviruses are a large family of viruses that are common in people and many different species of animals. Many people have previously experienced a coronavirus in the form of the common cold. But COVID-19 has not previously been identified in humans.

Myalgic encephalomyelitis/chronic fatigue syndrome (ME/CFS) is an illness Hornig said has been found in patients who have recovered from coronaviruses such as SARS. The CDC cites a 2015 report from the nation’s top medical advisory body, the Institute of Medicine, which says that an estimated 836,000 to 2.5 million Americans suffer from ME/CFS.

The CDC says that people with ME/CFS experience severe fatigue, sleep problems, as well as difficulty with thinking and concentrating while experiencing pain and dizziness.

Hornig said SARS-CoV-1 and MERS have been associated with longer-term difficulties, in which many people appeared to have symptoms of ME/CFS.

In April, advocates of the Solve ME/CFS Initiative (Solve M.E.) virtually stormed Capitol Hill for the fourth annual ME/CFS Advocacy day, which the organization calls a “national event to educate congress about the neuroimmune disease.”According to the organization, "Some COVID-19 patients are exhibiting Me/CFS-like symptoms (nearly 35% of patients)," adding that the illness typically follows a viral infection.

According to the organization, "Some COVID-19 patients are exhibiting Me/CFS-like symptoms* *(nearly 35% of patients)," adding that the illness typically follows a viral infection.

“ME/CFS is an urgent public health crisis based on what is happening in our country right now,” says Emily Taylor, Director of Advocacy and Community Relations at Solve M.E. “Evidence suggests that a virus as serious and widespread as COVID-19 could ignite rapid and significant growth in the ME/CFS population in just 36 months This is a very real, science-based concern, adding an even stronger sense of urgency to take action today. We must get the attention of our country’s leaders.”

The CDC published a survey last month which acknowledged that a large percentage of people who contract the novel coronavirus experience a prolonged symptom duration.

It was the first acknowledgment of its kind from the CDC, with the authors of the report noting that “disability are common in adults hospitalized with severe coronavirus disease 2019 (COVID-19).”

The recent accounts of children experiencing the same persistent symptoms comes as president Donald Trump claimed that children are “almost, and I would almost say definitely” immune to the disease in a continued bid to urge the return to in-person instruction at schools amid the ongoing pandemic.

Not long after Trump’s claim, a report from the CDC found that nearly 600 children have been hospitalized in the United States with a rare inflammatory syndrome associated with the novel coronavirus during the pandemic.

The CDC issued warnings to health care providers and parents in May about multisystem inflammatory syndrome in children, or MIS-C.

According to the CDC, MIS-C is a condition that causes various parts of the human body to become inflamed, including the heart, lungs, kidneys, brain, skin, eyes, or gastrointestinal organs.

The agency found that as of July 29, a total of 570 child patients were diagnosed with MIS-C, according to state health departments across the country. The CDC also found that all MIS-C patients had tested positive for the coronavirus, and 10 died.