At Tampa International Airport, there were long lines and short tempers Monday. Passengers waited, hoping for help at the Spirit Airlines ticket counter.

"We stood in line for over three hours to speak to someone," said Kim Streit.

"It hasn't moved, so we've been standing in the same spot the whole time," Doug Rose said.

The low-cost carrier is one of the top five airlines at TPA, but on Sunday and Monday, all planes were essentially grounded.

"It is impacting 20 inbound and outbound flights today," said TPA spokesperson Emily Nipps. "It impacted 15 yesterday. So pretty much all flights in and out of Tampa International Airport on Spirit Airlines have been canceled."

It is not just affecting folks in Tampa; there are mass delays and cancellations for Spirit across the country.

According to the flight tracker FlightAware, 40% of the airline’s flights were delayed Sunday, with 165 canceled. As of 10:30 p.m. Monday, there were 313 canceled flights for the day and 214 delayed.

"It's been a lot of jumping through hoops, trying to keep a good head, good attitude to just make it to where we need to go," Charlie Stopek said.

"My wife and I both have to get to work tomorrow. So it's going to cost us a lot of money if we're not here," said Rose. "We'd like to get home first thing in the morning." 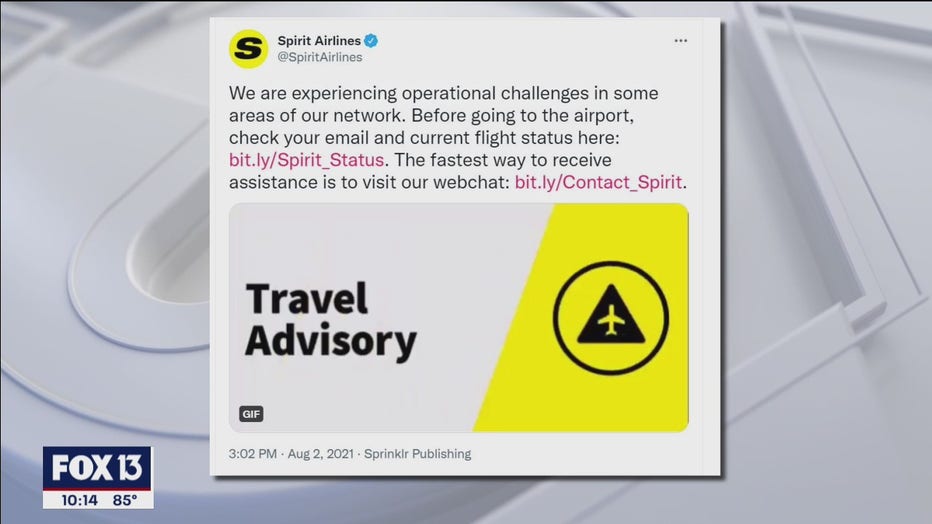 Passengers tell FOX 13 News there has been a lack of communication and assistance from the airline.

"Finally got up there and they said, ‘You can either get a refund or we can put you on a different flight,’" said Streit. "So I asked her, ‘Can we get food vouchers? Can we get a hotel room, anything?’ They said, ‘No.’"

Some families were even left stranded in the airport overnight.

Stopek and his 12-year-old son, Noah, have dealt with two canceled flights over two days and in two cities.

"We rented a car, drove to Orlando. We got there. That one was delayed a few times, went through the ordeal of the Orlando airport. We actually got to the gate for them to tell us that that flight was delayed till 3 p.m. today and then it was canceled this morning," he said.

Officials expect Spirit flights to be impacted for the next few days and recommend keeping a close eye on the status.