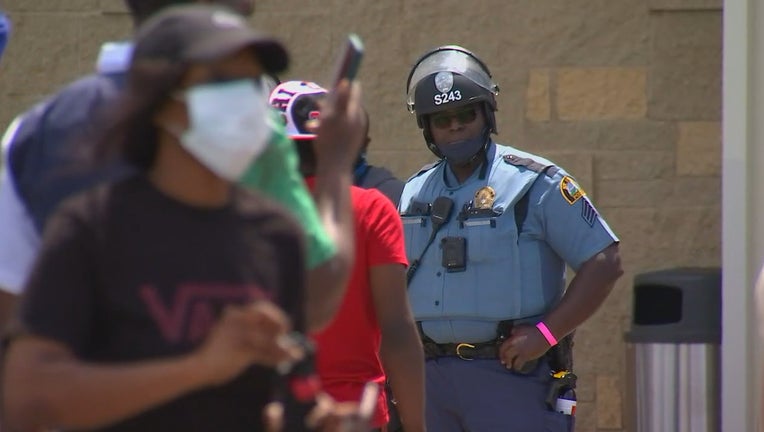 After protests over the death of George Floyd turned violent in Minneapolis Wednesday evening, businesses were burned and looted throughout the night.

St. Paul was faced looting and arson on Thursday as rioters struck the city in the wake of unrest caused by the death of George Floyd

Thursday afternoon, groups turned their attention to the Midway area of St. Paul. Police say groups of younger people were attempting to steal from the Target store in that location and other businesses.

Chief Todd Axtell says those groups are moving up and down University Avenue using vehicles with removed license plates look to cause mayhem.

Protesters damaged law enforcement squad vehicles at a St. Paul Target. Protests have been bubbling in the Twin Cities metro area in response to the death of George Floyd.

Officers lined up to prevent individuals from entering the Midway Target. The crowd responded by launching rocks, bottles, and even shopping carts at officers and their squad vehicles.

Law enforcement and a large group are in a stand-off outside a St. Paul Target Thursday afternoon.

"Groups of young people are trying to penetrate our stores throughout this city," said Chief Axtell. "We won't tolerate people being injured in the city. We're not going to tolerate our buildings being burned down."

Axtell says the department has called in more officers to help with the crowds and requested help from other police agencies. Mayor Carter says he is also asking Governor Walz to deploy the National Guard.

Thursday afternoon, Walz activated the National Guard to assist with protests in Minneapolis. Chief Axtell says Minnesota State Patrol has already been brought in to help.

As for now, police and Mayor Carter are asking people to avoid the Midway area. Chief Axtell is also warning rioters that police will work to make arrests for any crimes committed.

"You may think you got away with something today, but we got a lot of cameras out there," said Axtell. "I guarantee we will take the law to the full extent to make sure you are held accountable for the crimes you commit in this city."

Chief Axtell says there have also been reports of other criminal activity in other sections of St. Paul including the Sun Ray Shopping Center on the east side. Police have been dispatched to control these areas as well.