Free wheel locks in St. Pete after string of thefts

ST. PETERSBURG, Fla. - The St. Petersburg Police Department gave out free steering wheel locks to certain car owners as they continue to respond to a high number of Hyundai and Kia car thefts over the last few months. All were given away within a day.

Hyundai Motor Company sent the department about 100 anti-theft steering wheel locks. Despite technically being for Hyundai owners, officers said they will give them to Kia owners too. That's because in just the last two weeks – a third of their theft calls have been for both brands.

Alissa Brinkley, one of the car theft victims, said her 2019 Kia Sportage was involved in a hit-and-run crash over the weekend, but she wasn't the driver. She had no idea her car was taken from the front yard of her St. Pete home where she last parked it until she got a call from the police.

RELATED: Kias and Hyundais continue to be stolen at alarming rates, police warn

The car now sits at an impound lot, and Brinkley immediately noticed how it was stolen when she got a glimpse of the damage.

"I looked inside, and the ignition was gone," she said. 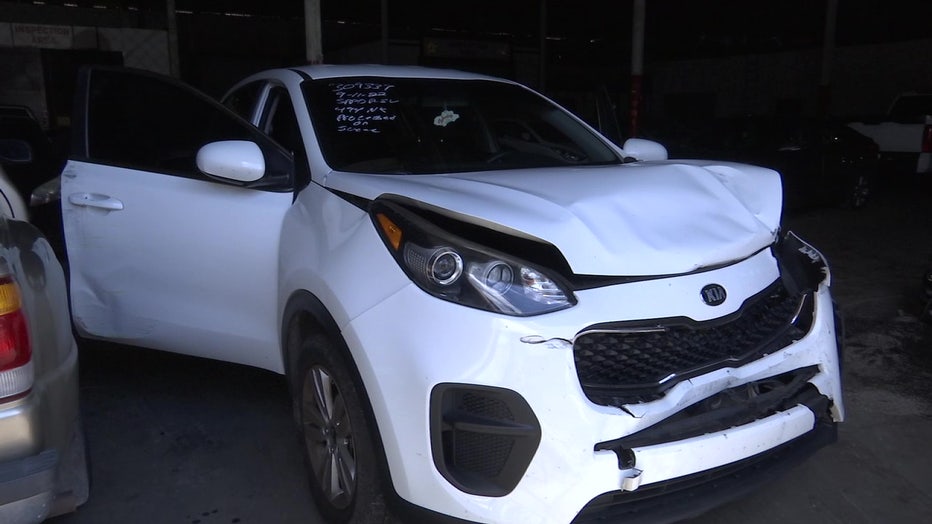 Sgt. Cody Lance with SPPD handles auto thefts and said Brinkley is not the only Kia or Hyundai owner who has recently had their call stolen. It's a call they've responded to often just in the last few weeks for both car brands.

"Twelve of our last 36 thefts or attempted thefts were Kia or Hyundai's where the ignition was damaged," Sgt. Lance added.

He believes thieves are using a technique to break into the steering column, putting specific models at risk.

"It's Hyundai's manufactured before 2022 that use a steel key and ignition. It's not the push to start models," he said.

Sgt. Lance said they've been able to find some of these car thieves. They've been juveniles between 14 and 17 years old. They haven't located the person responsible for stealing Brinkley's car yet. Currently, she's left to find rides to work and make arrangements for her kids to go to school.

"You're taking a part of someone's life, and it has got to stop. It has to stop," Brinkley said. "People work hard for the things they have. Very hard."

The department is hoping these wheel locks will put drivers' minds a little more at ease. The hope is for a potential thief to see the steering wheel and not want to try to break in.