Over the summer, Mayor Ken Welch scrapped plans from two previously chosen developers. He said the plans were outdated and didn't reflect the current economic conditions, new workforce trends after the COVID-19 pandemic and the city's needs.

St. Pete Mayor Ken Welch threw a curveball when he announced the city will restart the process for Tropicana Field's redevelopment and will cancel the current RFP process. Rather than choosing between two developers, the process will start over.

Welch started a new request for proposals that were due 10 a.m. Friday. The four groups that submitted proposals included Sugar Hill Community Partners, 50 Plus 1 Sports, Restoration Associates, and Hines & the Tampa Bay Rays.

"We commend 50 Plus 1 Sports, Hines & Tampa Bay Rays, Restoration Associates, and Sugar Hill Community Partners for their diligent efforts to submit proposals that will fuel inclusive progress and equitable development for future generations who will live, visit and do business in our city," Welch said in a statement.

The Rays sent in its proposal with the global real estate company, Hines. Hines has two projects in the Tampa Bay area. It’s currently developing a mixed-use community in Pasco County, and developed and sold a luxury, multifamily residential complex in St. Pete. 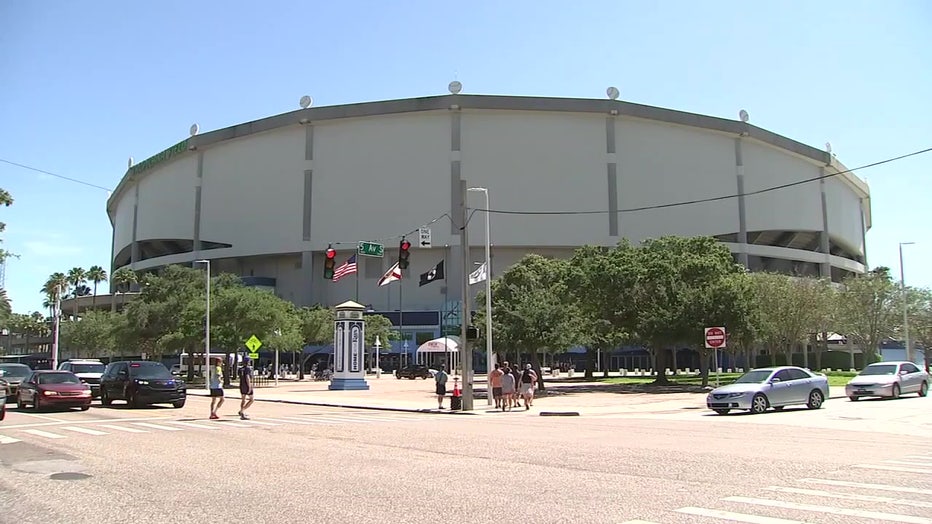 "We will review the proposers' plans with a keen eye on their interpretation of affordable and workforce housing; office and meeting space; arts and culture; research, innovation, and education; recreation; open space, healthy and sustainable development; and intentional equity," Welch said. "We look forward to engaging the community as we determine the future of this historically and economically vital part of St. Petersburg, and the Tampa Bay Region."

Welch asked that proposals included a focus on affordable housing, 17.3 acres for a baseball stadium, and honor the Gas Plant District's history.

St. Petersburg Mayor Ken Welch grew up in Gas Plant. He has fond memories of learning the value of hard work and being held accountable as a child. It was a close-knit community that was promised an economic return when the city voted to demolish the neighborhood to build a baseball stadium. Those promises have yet to be fulfilled, but, he said, it's not too late. 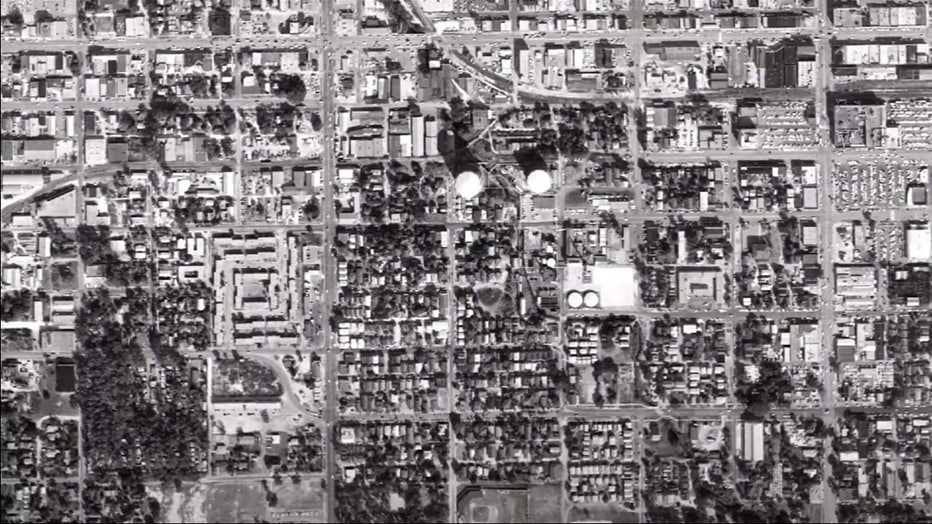 FOX 13 News spoke with three of the four groups who submitted proposals. The fourth group, Restoration Associates, hasn't returned our request for comment.

The mayor will decide on a proposal by the end of January. A city spokesperson said they’ll release the details of all four proposals next week. They’re also holding an event on Jan. 4, 2023 at the Coliseum where residents can hear from each group and get more information about each of their plans. 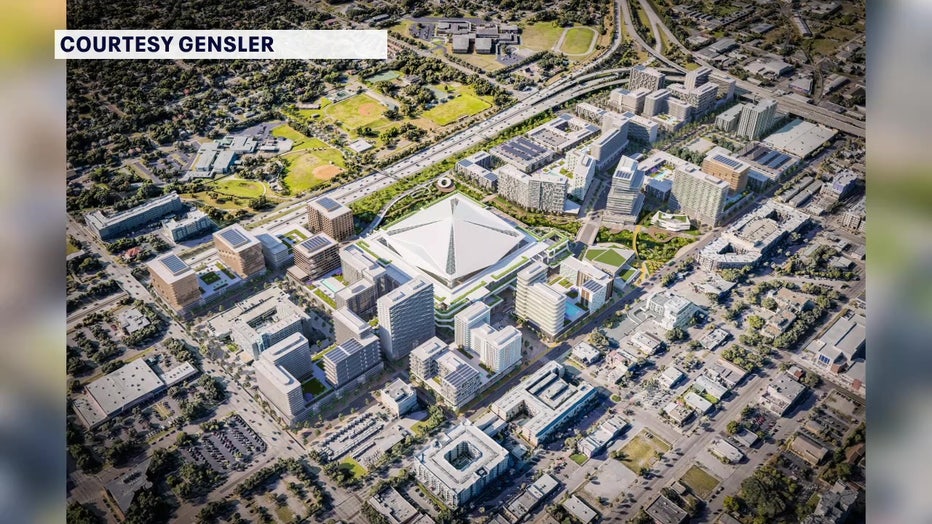 Gensler, a global architectural and planning firm, is their master plan architect. Gensler is working with St. Petersburg-based Storyn Studio for Architecture, and Washington, D.C.-based Dantes Partners will be the affordable housing partner, a press release from Hines said.

The site, if chosen, would include more than 850 affordable and workforce housing units onsite. Hines and the Rays would also create about 600 off-site residences through homeownership grants and rental assistance programs in St. Pete, according to Hines. 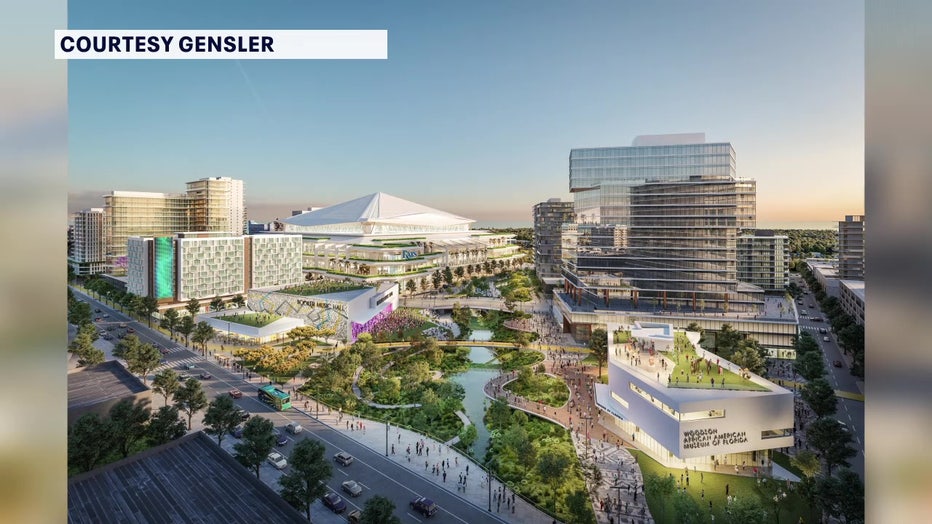 The Rays and Hines are also pledging $50 million to intentional equity initiatives that will "support and uplift historically disadvantaged populations through a variety of restorative strategies," Hines said.

"Together with the Rays, we have the opportunity to create a city-defining, diversified and inclusive place making village, with their new ballpark at its heart," Michael Harrison, the senior managing director at Hines, said. "We have coordinated extensively with the Rays on the vision and master-planned design and infrastructure necessary for the stadium, which is essential to the long-term vitality and economic viability of the entire project. We look forward to bringing our extensive experience and lessons learned from Hines’ similar projects around the globe, as well as our track record of seamless integration with the surrounding community and neighborhoods to St. Petersburg."

Matt Silverman, the president of the Rays, said Hines has demonstrated knowledge, expertise and reliability to deliver complex projects for decades. 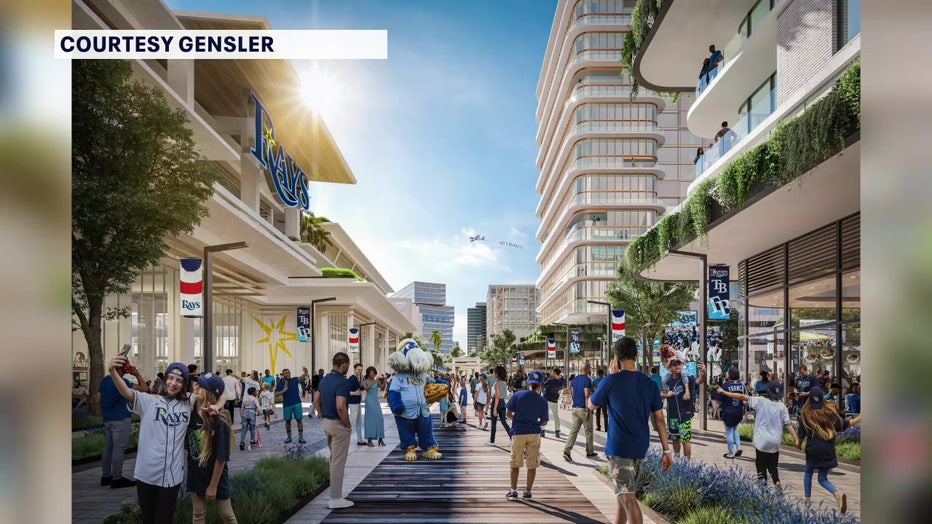 "Hines has been acquainted with this site for fifteen years, and we know that Hines will be here fifteen years from now, fulfilling its promises and vision for the Historic Gas Plant District," Silverman said. "St. Petersburg deserves a world-class development partner with a track record of steering projects through the inevitable economic cycles we will face. With Hines leading this effort, we gain greater certainty of quality and timely completion. Together we can create a vibrant, equitable neighborhood that will be a wonderful home for Rays baseball for generations to come."

Dawn Gunter, Gensler’s principal, added that the mayor’s goals for the Gas Plant District are "visionary."

MORE: ‘We just need to get moving on this’: Tampa mayor says it’s time for the Rays to make a stadium decision

"Over half of the project site is committed for public benefit uses, including the restoration of Booker Creek as an active natural greenway and a new linear park connecting the site east to west," Gunter said. "The entire Hines-Rays team is excited to work hand in hand with the City of St. Petersburg and surrounding communities to collectively create a transformational District that will become a global example of equity, resilience, healing and joy." 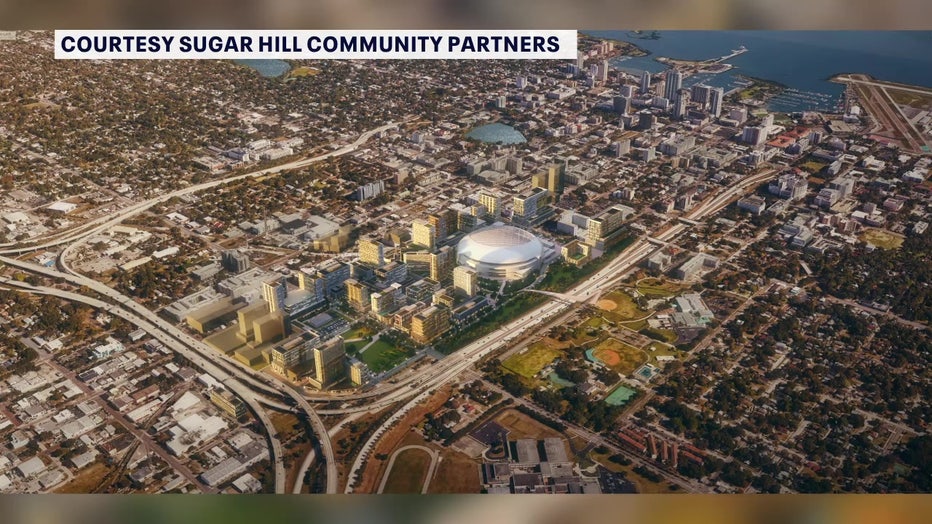 Sugar Hill Community Partners, a group led by JMA Ventures based out of California, also submitted a proposal. It was one of two finalists during the last request for proposals.

The other finalist, Midtown Development, didn’t submit a proposal this time around and didn’t respond to a request for comment.

MORE: Gas Plant District in St. Pete: One of the oldest Black neighborhoods razed for baseball

"The reason why I personally got involved with this project is I read up on the history of the Historic Gas Plant District, and I was like, that is just a travesty, and the neighborhood I grew up in Sacramento, it’s called Old Park Sacramento, there were a lot of parallels between both," Kevin Johnson, the JMA master developer and principal of Sugar Hill, said. 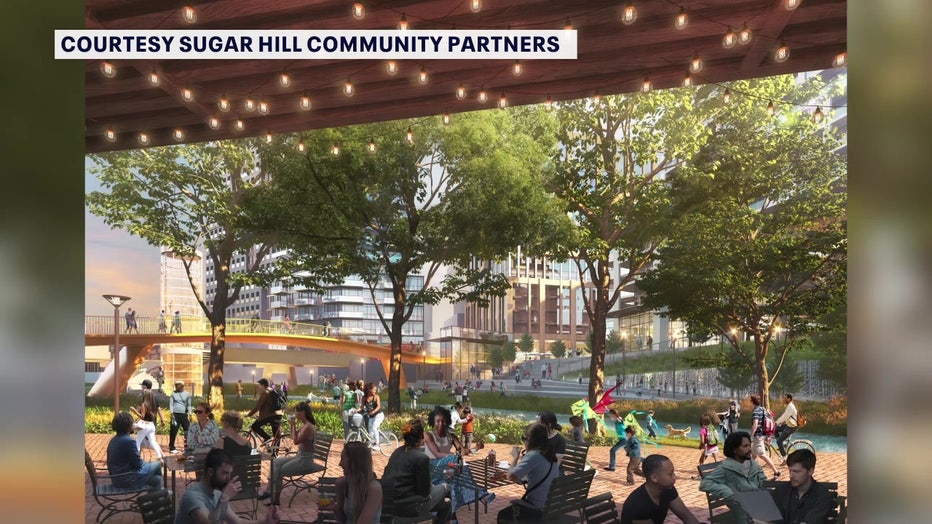 Johnson also served as the mayor of Sacramento.

"It's ability to be inclusive and equitable where people can own and live and play and worship and go to live performances," Johnson said. "We're trying to create a brand-new neighborhood all over again, but where we level the playing field, which means there's going to be African Americans who are going to be able to participate in a real way."

Johnson said his team includes more than 20 local and national diverse experts, including the St. Petersburg Housing Authority’s president, a community advocate, a local historian, a local design advisor and an architect and a diversity coordinator, among others.

Johnson said more than 50% of the units will be affordable and workforce housing, and he said they pride themselves on community involvement. 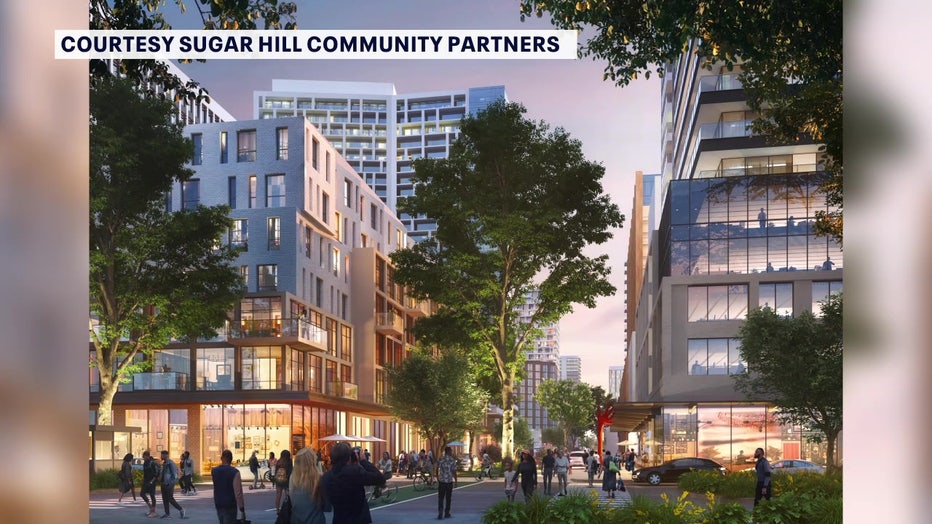 "To be able to be a part of a team that can make good on the promises that were broken and not kept, what better scenario can that be so our team started on this journey two years ago," Johnson said. "We’ve had over 80 community meetings. We wanted to make sure the community had a seat at the table."

Johnson said he believes the diversity of the Sugar Hill team and the focus on the community sets them apart from other groups that submitted proposals. He estimates the cost of the project to be anywhere from $3-5 billion, but said they’re still doing some analysis.

READ: St. Pete and baseball: A relationship that spans over a century

David Carlock, the development manager for the project and Founder and CEO of Machete Group Inc., said they became interested in St. Pete as a city close to six years ago.

Carlock said the Machete Group has done a lot of mixed-use projects and stadium development. He said Sugar Hill has strengthened its team and vision, and "refined and enhanced" their ideas since they submitted their last proposal in January 2021. 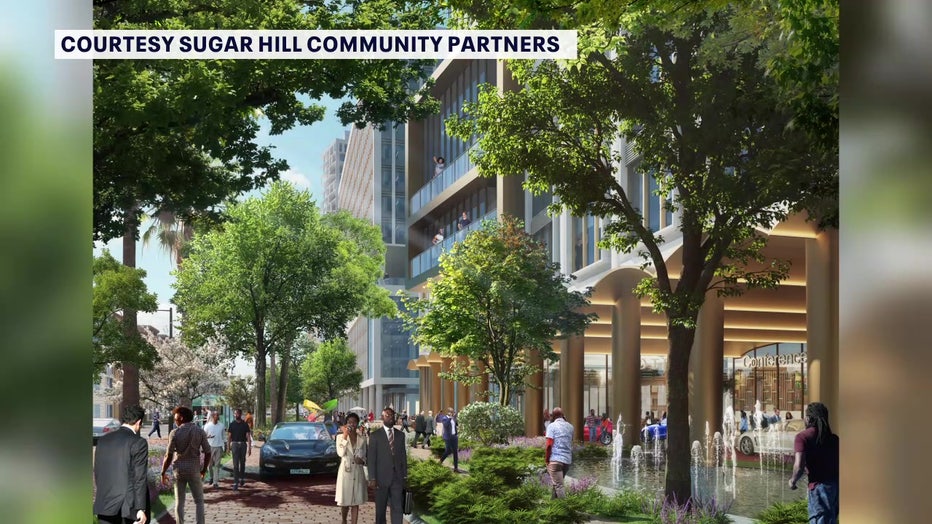 Carlock said the project will include arts and culture, workforce development, affordable workforce housing and add a historical context. According to renderings, they plan to transform Booker Creek into the green heart of the project and add bridges for pedestrians and cyclists over Booker Creek.

More on 50 Plus 1 Sports' proposal

50 Plus 1 Sports based out of Coral Gables also submitted a proposal. 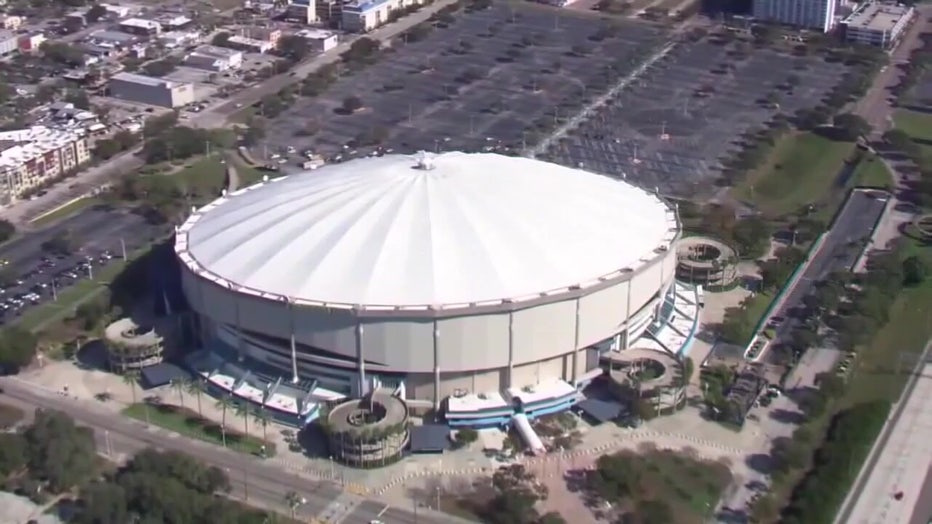 "We call it 50 Plus 1, becausewe pretty much mandate that there's 50% minority women and veteran-owned businesses that are involved not only in the construction phase, but also in the professional service phase, engineers, architects," Monti Valrie, a managing partner at 50 Plus 1 Sports, said.

According to Valrie, 50 Plus 1 Sports provides 100% of its own financing, and is already backed by investment groups for this project. He said he believes they also meet the mayor’s requests when it comes to the proposal for the project.

Valrie didn’t want to reveal too many details, but said the plan is for a mixed-use area with a hotel, shops, condos and affordable housing.

"Our focus is to give the fan the best fan experience," Valrie said. "It’s a very live, eat, work, play environment on every project that we’re involved on."